The first thing the doctor noticed when my daughter Naomi was born was her club feet. It was two hours later that the nurse, who was giving Naomi her bath, called the doctor back to look at my child’s distended abdomen.

Naomi was born with a rare genetic condition that wouldn’t finally be diagnosed until she was 10 years old. Her large, round abdomen — the result of her poorly formed abdominal muscles — was one of the least of her medical worries, but the symptom drew the most negative attention during her early years. By the time Naomi was a toddler her pregnant-looking belly drew stares in public.

One day as I walked Naomi up the sidewalk to our house, one of our neighbors, an elderly woman who spoke no English, came right up to Naomi and lifted up her shirt. She stood looking confused at my daughter’s bare tummy while I tried to figure out how to communicate with hand gestures that Naomi was born that way.

Once, in public restroom another older woman reached down and tugged on Naomi’s elastic waistband from behind. “Too tight!” she chided me in broken English, but her stern face quickly softened to confusion as she found that Naomi’s pants weren’t tight enough to cause her belly to bulge after all.

“No,” I said firmly. “They’re not too tight. She was just born with a big belly.”

I cried on the way home from that outing, realizing my daughter would have to answer questions about her abdomen her whole life, wondering if she would be bullied, how she would view herself as she grew and how she would answer all the questions sure to come her way from curious children and nosy old ladies alike.

When Naomi was 4, a neighbor boy stopped me outside and asked, “Why does she look like she’s pregnant?”

“Because that’s how God made her,” I answered. “Why do some people have big noses or big ears? God likes variety.”

I was glad I’d been there to silence that child and quickly shift Naomi’s attention to something else, but a few weeks before she entered kindergarten, knowing I couldn’t shield her forever, I decided I needed to prepared Naomi for anyone who might ask her questions at school.

“You know, Naomi,” I said, “that you have funny kidneys and some liver issues?”

“Well, when you were in my tummy,” I continued, “we think your kidneys or liver were struggling a little, and you collected a lot of fluid in your abdomen called ascites.”

Naomi, who is mildly autistic, listened closely to what I was saying. She’d always been fascinated by details and had a great vocabulary, so I didn’t feel the need to talk down to her at all.

“We think that fluid stretched out your tummy muscles while they were forming. Your liver and spleen are also a little enlarged because of the scar tissue in your liver and your tummy looks a bit bigger than other kids’ tummies now. Did you ever notice that?”

“No,” Naomi replied, not seeming concerned but paying close attention.

“Well, it’s just a bit bigger,” I assured her, “and it’s just fine the way it is because God makes everybody differently, but someone at school might ask you why. So what would you tell them?”

“Well…” Naomi paused, thinking through the details of what I’d said. “I would tell them that when I was in my mommy’s belly I collected fluid in my abdomen called ascites, that it caused my abdominal muscles to be weak, and that my liver and spleen are enlarged because of the scar tissue in my liver, but that it’s OK ’cause God made me that way and he makes everyone different.”

I laughed a little and said, “Well, that’s the long answer, Naomi. I wanted you to know that, but you could just give them a short answer like, ‘That’s the way God made me’ if you want to.”

Naomi agreed, and the subject was laid to rest until she came home from her first day of kindergarten.

As we debriefed about her day she suddenly laughed and said, “You know, Mommy, someone did ask me why my belly was so big!”

My stomach turned a little, but Naomi was clearly impressed by my fortune-telling abilities, so I  smiled and laughed too.

“Oh really? And what did you tell them?” I asked nervously.

“It was a girl behind me in line to come in from recess,” Naomi explained, then she added confidently, “I gave her the long answer.”

I think my jaw dropped here, but then I had to chuckle thinking of Naomi confidently walking that poor girl through every detail of her medical history.

“And what did she say?” I asked again.

I looked at my baby girl then, confidently grinning back at me and realized she had within her all the gumption and grace it would take to make her way in a world of people ignorant about her condition. She had learned to be her own advocate, educating without being offended, self-assured in the midst of the gawkers, and I realized then she would be able to handle the curious kindergarteners and even the nosy old ladies just fine.

Smiling a little to myself, I actually began to look forward a little to the next time someone asked Naomi about her abdomen and the first time I could watch her give them lessons in abdominal cavity anatomy, respect for the differently-abled and maybe even tact. 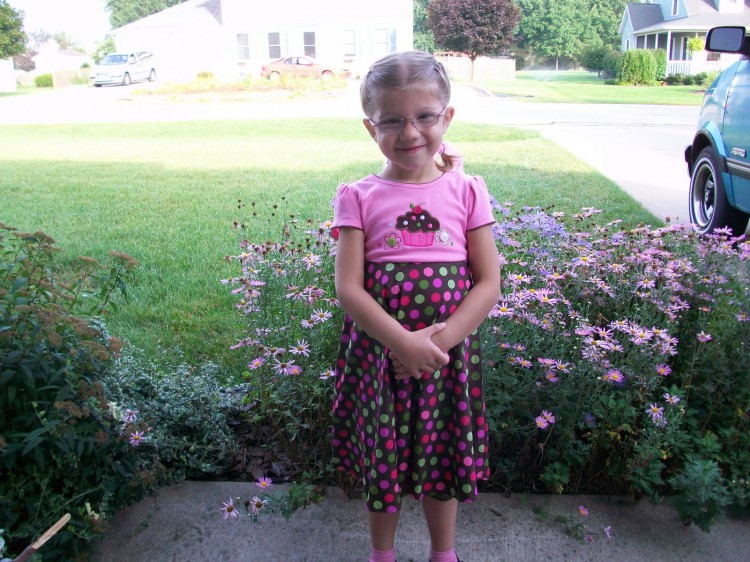 The Mighty is asking its readers the following: Share with us the moment, if you’ve had it, where you knew everything was going to be OK. If you’d like to participate, please send a blog post to community@themighty.com. Please include a photo for the piece, a photo of yourself and 1-2 sentence bio.