My Daughter Was a Princess and a Superhero

— “Waitin’ on a Sunny Day” by Bruce Springsteen

Two weeks ago, I called my daughter, Ellie Mae, a superhero. I wasn’t referring to her as a Starfire–type character with the power to harness solar energy. She’s more like one of the X-Men whose mutant power, on this occasion, was an immunity to drugs. (If you’re not a comic book geek you won’t understand any of that!)

Following a long period of epileptic seizures, she had three doses of rescue meds at home to sedate her and to try to break the cycle. At the hospital, she was given four more without success.

After talking to the doctors, we agreed she was a superhero.

“Hold her tight, Dad, I need to get this needle in the back of her hand.”

That was to insert a canula. There was no time to numb the area with the usual array of magic creams. Just hold her tight.

And they did it twice.

My response was, “She’s had worse.” Because, of course, she has. She’s had more hospital visits and procedures than most of us. I’ve never had an overnight hospital stay, she’s had a lumbar puncture. There’s no competition against that in the superhero stakes.

The doctor told us the issue may be her growing tolerance to drugs. As anyone with epilepsy will tell you, medication is a moving goal post. In the time they take to work, you get used to them and have to change medication. This one treats your hand tremors but makes you sleepy, that one makes you more alert but gives you hand tremors. It’s frustrating but acceptable.

Last Monday, we were expecting to be given a change of drugs, maybe a course of steroids to break the cycle and then go home. Instead, we were told we had weeks rather than months or years left with her.

I knew the doctor was wrong because we’d been told that children with Batten disease rarely reach their teens. I played it safe and decided in my mind that we had her until she was 10. At 10 years old, I’d start to panic, wondering if each day would bring some development we couldn’t get back from.

Two days after going to hospital, we were told she probably had days rather than weeks.

I shouldn’t have been surprised because even superheroes die. Superman, Batman, Spider-Man, Captain America, all the Robins, Flash, Daredevil, Green Arrow, Green Lantern and Phoenix (it’s every couple of weeks for this character).

They’ve all succumbed at some point and some of them were pretty heroic, but they all chose their path. Yes, I appreciate that Daredevil didn’t ask to have toxic waste spilled on his eyes as a child, but he did decide what to do with the power it gave him. He could have chosen to just muck around the rest of his life.

But Ellie Mae didn’t choose any of this. She accepted the disease when it first appeared and gave herself to tests and procedures, EEGs, lumbar punctures, MRIs, general anesthesia, local anesthesia, eye tests, swallow tests and hearing tests.

And she dealt with it all with her usual cheeky manner; as Rod once told me, she was always the happiest girl in any room.

Ellie Mae passed away at 10:30 on the morning of May 7. She was 6 years old and had been fighting Batten disease since she was 3. She chose to fight it in her own style, with little complaint and often seeming as if she didn’t have a care in the world.

A princess and a superhero.

Hard times baby, well they come to us all
Sure as the tickin’ of the clock on the wall
Sure as the turnin’ of the night into day
Your smile girl, brings the mornin’ light to my eyes
Lifts away the blues when I rise
I hope that you’re coming to stay 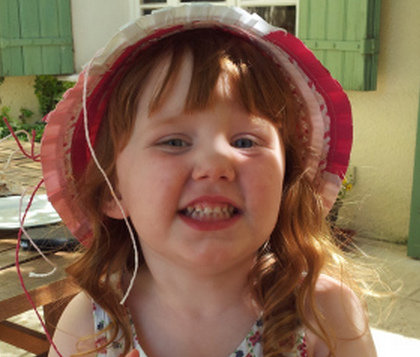 I love you to the moon and back.

This post originally appeared on Cycle to the Circle.

We are Duncan and Lynsey, Ellie Mae (6) and Caleb (4) and we live in Leeds, West Yorkshire. On holiday in May 2011, Ellie Mae had an epileptic fit. Following this we had a long journey to diagnosis, during which time Caleb also started to suffer from epilepsy. We were told on December 20, 2013 that both kids have Late Infantile Batten Disease (CLN2), and that they are not expected to survive into their teens.