There are a multitude of things I can never claim as a sure thing, but one thing I can declare with a good deal of certainty is my life will never be a Disney movie.

For eight years I ran my own business while dealing with the challenges and stressors that came with it. Panic attacks had become a weekly, if not daily, occurrence and I lived my life like I was only half a step ahead of a charging boulder. For a time, I even convinced myself this irrational, all-encompassing fear was what spurred my drive to succeed, but instead of propelling me closer to the finish line, I found myself dropping further and further behind with each new challenge — each setback taking me longer to recover. I was failing both mentally and physically and I realized that the life I had been enduring, not living, was no longer working for me.

Determining what was wrong and what needed to be done to set things right seemed, at first, an insurmountable task. With depression holding me prisoner in my bed, and an overwhelming sense of failure constantly pressuring me to give up, it was evident I had become my own worst enemy. I would later learn the antidepressants I was prescribed were doing more harm than good due to a conflict with my at the time, undiagnosed bipolar disorder, but all I felt was that I was going “crazy.”

Having encountered the term “high-functioning alcoholic” at some earlier point in my life, I appropriated it to explain how I had survived for so long on what was obviously so very little. As a self-described, “high-functioning bipolar,” I fooled the world into thinking I had everything under control while on the inside I was crumbling into myself like brittle, flame scorched, paper walls into an ever-expanding black hole. I have since come to learn this is a common tactic adopted by many dealing with mental health issues, and while it may prolong our charade of fulfilling some mistaken sense of self-preservation, it does little more than guarantee our eventual downfall. The truth of the matter being no one will make a move to catch you if they never see you falling.

Then, starting in 2009 and spanning the course of the next two years, I would sell my business, take a position with the new company, and move my family to another city for a fresh start. I began seeing a therapist and worked with my doctor to try and get myself the help I needed. None of it ever became easier. I cried almost every day on my way to and from work and thought often of giving up. Eventually, I ended up in the hospital where I received an official bipolar diagnosis and a regimen of medication and therapy, most of which continues to dictate my routine to this day.

If my life was a Disney movie and the demands upon me had become too great, I would have thrown my arms in the air and shouted, “Enough!” and the whole world would have listened. I would have quit my job, told my boss to go to hell, picked up and moved my family to some often-dreamed-of-but-never-thought-possible destination and somehow, in some fairy tale, twist of fate sort of fashion, landed on my feet with enough money and security to make the whole dream sustainable, as I lived out the rest of my “happily ever after” life.

But my life will never be a Disney movie.

But Disney or not, you can still learn a thing or two from movies and it was from Grandpa Gustafson in 1995’s “Grumpier Old Men” that I gained some valuable perspective. While explaining the reality of wishes, he said, “Well, you can wish in one hand and crap in the other and see which one gets filled first.” While it is certainly no, “When You Wish Upon a Star,” I believe it is a lot more relevant and infinitely more practical. If you spend your life wishing things were different, all you will be left with is a pile of crap. The unpopular truth is that life is hard. Its journey is often uphill and it doesn’t care how heavy your baggage is, but if you are going to get where you are going, you are going to have to start walking.

Making significant changes in one’s life is never an easy task, but for someone dealing with a crisis born of their own mind, I believe it can literally mean the difference between life and death. As daunting and impossible as it may seem though, it can be done and I like to believe I am living proof.

The following lessons are ones I have learned since I began my journey towards a better life. I don’t pretend any of them are easy and I know none of them will bring instant gratification, but they are things that have helped me so far and with any luck, they may help someone else as well.

First, ask for help. Second, take it. Do the opposite of what your brain tells you — it’s not your friend right now and it wants to keep you isolated. Reach out and let people know you’re not OK. If you can gain professional guidance and support, surrender to it. Following your own plan hasn’t saved you so far, so why not let someone else have a go?

Now that you have the support you need, fight. You can’t enter this half-assed. You’re either in or you’re out. This is your life you’re battling for and some days it will bring you to your knees with exhaustion. Focus on your goals and don’t give up. You can beat this.

3. Be patient and forgive.

Everyone slips up now and again. The most important thing is to not let it stop you. Don’t lay blame and don’t lay down and let it swallow you. What is past is past and what is in the future, is still to come. Live in the now and know you can only do what you can. No more, no less. You are worth forgiveness and another chance.

Declutter your life. Remove the extraneous elements you accumulated in your effort to obtain “normalcy.” Life will never be “normal.” At least not in the neatly pre-packaged, romanticized version you may have been chasing. True “normal” is what you build, not what you buy. Let go of the things you assume make you a “real person” when they only serve to create strain and stress. Disconnect from those who are toxic in your life, present only to introduce drama and conflict you neither need nor deserve. Remove the triggers that sabotage your efforts to achieve peace.

Start making choices. Do something with your life and don’t wait for it to do things to you. Each time you engage in something you wouldn’t choose for yourself, you can accumulate resentment. You can learn to feel helpless and to hate the world. You can learn to hate yourself. You’re not weak and you’re not helpless. Figure out what matters to you, what makes your life matter and pursue it. Live for yourself and find happiness in the space you want to be. You can’t control the world but you can control how you place yourself in it.

My life will never be a Disney movie, but I’m not convinced it would be any better if it was. There is no one more uniquely qualified than myself to write the script to my life. Even when I struggle with writer’s block or find my plot meandering down roads I don’t recognize, I know it’s the surprise twists in my tale that make it worth the admission and I, mental health issues and all, am a better person for experiencing them. 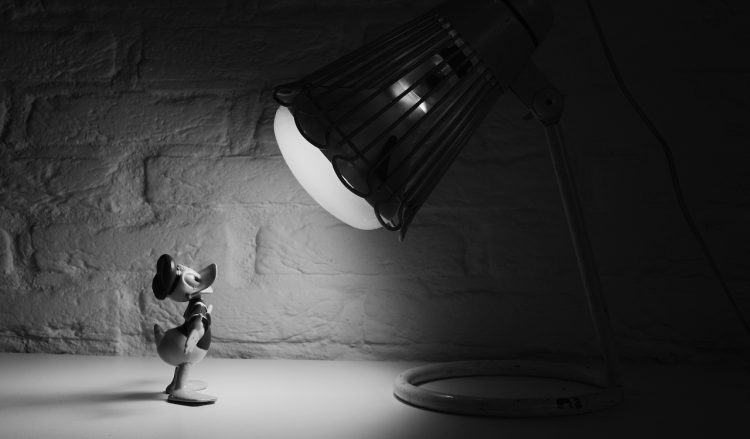 Christopher Muggridge is a creative and technical writer based in London, Canada. Drawing from his own personal experiences with Bipolar, anxiety, and depression, as well as friend and family connections with related issues, he often writes about mental health and perspectives on human interaction. In addition to writing for his own personal satisfaction, he is also the Creative Strategist and writer for Lumin8 Strategy & Design.