He’d just spent three weeks at the Yale Children’s Psychiatric Center. He was so excited to come home. He’d been there over Christmas break. It was a little disappointing, but we made the best of it.

When he finally walked through the door, carrying bags full of donated gifts, he looked at me and asked, “Can I dye my hair blue, Mom?”

I thought for a moment.

First, of all the reasons I should say no. What would his school say? I was pretty sure it was against dress code. What would other parents say? Would it damage his hair? Would it set a bad precedent? Would he ask for piercings next? Tattoos?

Then I looked at him — really looked. He was 8 years old. He had just been discharged from his seventh psychiatric hospitalization. Life is hard for Mateo. So little makes him happy. So little brings him joy. BMX bikes, the arcade, the rare movie he connects with… Was a little package of hair dye and some disapproving looks from strangers such a big deal if it gave him a moment of sheer joy? His friends at school knew he’d been to the hospital. They’ve seen him kick the wall in the hallway. They’ve seen the ambulance come. If I sent him back to school after winter break with blue hair, maybe he wouldn’t be known as the weird kid. Maybe he could be the cool kid — the cool kid with the cool hair.

Twenty-five to 50 percent of people with bipolar disorder attempt suicide. When I think of that, coupled with the tears I’ve watched him shed because it’s so hard to be Mateo, it seemed like a no-brainer.

Life is too short to not have blue hair if you want it. 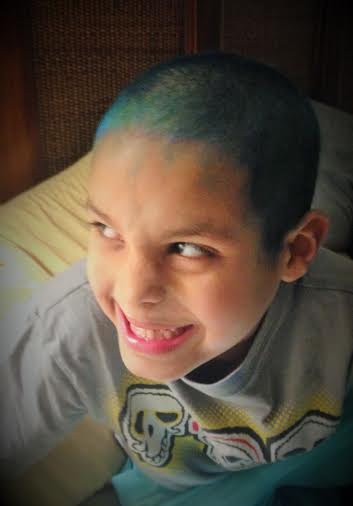 Justice writes fiction about teens with mental health issues and disabilities under the pen name Justice Serai. She&#8217;s also a mom and fierce advocate for her two adopted kiddos, one with special needs. Visit A Phoenix From the Ashes for more.