As part of my borderline personality disorder (BPD), I experience dissociation, depersonalization and derealization a lot. They are my body’s “go to” for dealing with the intense emotions that are part of the day-to-day grind of living with BPD. These sensations can be hard to describe and explain to others, but I’m going to have a go.

Recently, I was stuck in a very dissociated space. The only way I could think of to describe it at the time was as if my body was in one place, my brain another, my thoughts somewhere else and my feelings in yet another place.

While I was feeling that way, I drew the picture below. It was strange drawing from such a disconnected space, it’s not something I usually do. Later I also wrote about the sensations I was experiencing at the time:

Floating in a bubble just above my own head, puppeteering my body, clumsily, on strings.

My physical sensations are dulled, except sounds, which are weirdly amplified and out of sync.

My voice comes out but is strange and far away sounding.

Everything is going too fast and too slow at the same time, people and cars loom up suddenly out of nowhere. “Real world” things are unpredictable.

I feel like I am piloting my body by remote control.

The world doesn’t seem real or like it’s really there. It’s somehow strange and baffling, like it’s not the world I was in, last time I was in the world.

When asked “How are you?” I can only reply, “Not really here” in a slow, dreamlike voice.

It’s scary, but also comforting at the same time. 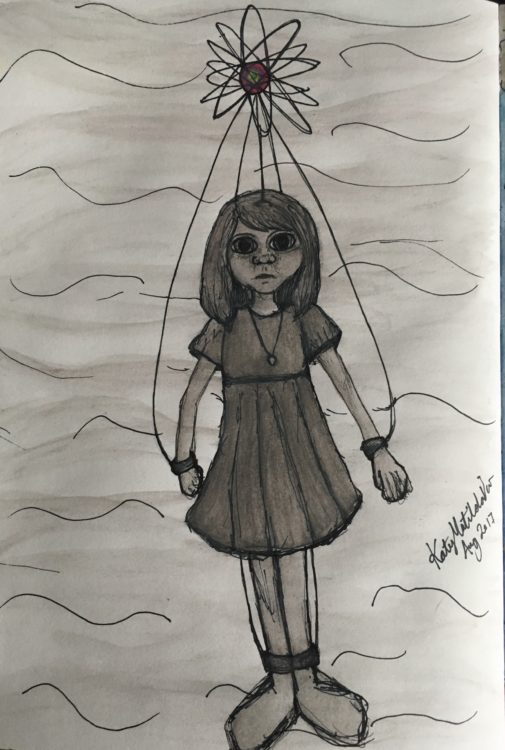