Reflections on Pressing Pants and My Husband's Cerebral Palsy

Check out The Pencil Case group on The Mighty app for creative self-care and connection (journaling, affirmations and more!).

I am an accomplished pants presser. In a day, I press 60 pants. I press pleated pants so that the pleat turns into the seam without a break. I press pants one leg at a time, from the cuff to the crotch. I press the pelvis of the pants with a cork-handled steam iron as they drape loose on a hanger. I hang pants on the hanger so that the creases of each pant leg line up and form a flat spread of cloth over the hanger rung.

The pants that are easy to press hardly need it. The creases are sewn or worn in and have been carefully stiffened, just enough to keep the crease without messing up the way an empty sleeve falls.

Then there are the pants that need it: bent out of shape, stretched in the wrong places, old and faded or torn. My heart tugs over these pants, stained or bleached, a single string running or pinching the fabric, the sleeve too broad for the press or too short to stay on, the pants torn and stapled with a bright green tag that reads “Defective Condition.”

The afternoon I decided to exclusively date my now husband, Michael, I noticed a dry cleaning tag on his pants. In the bustle of classes and a new job, I had forgotten the laundry, but there was a tag I’d seen so often stapled to one of his belt loops, a brown tag with a three-digit number.

Michael has spastic quadriplegic cerebral palsy. Standing straight, he is as tall as I am but this stretches his knees, keeping him a few inches shorter than me while we walk. His voice stretches when he talks, his vocal cords constrained to broad adjustments for inflection. When he is tired, it is as though his tongue is clamped to the roof of his mouth and he labors to form distinct consonants and vowels. I have spent time enough with him that I understand what he is saying with little effort, though I notice how he sounds again when other people struggle to hear him.

Right now, Michael works as an attorney doing contract work. Before he graduated law school, his mom and others recommended that he never wear jeans to class, and he embraced the advice. Most days when we were dating, he wore slacks and a button-up dress shirt. The first time we went to the law school together, I was surprised to see other students in jeans and tees. I mentioned this, and he said, yes, he dresses differently: he is the minority.

Michael works from home right now, but when we meet up on campus for my classes, I’ve taken to buttoning or rolling up his sleeves. I invite him to untuck the half of his shirt that is still pinched into his pants. His pants are usually stained in a few places and faded with wear at his knees or along the seams. Very likely, I have pressed his pants, which he brings to the laundry I have spent hours working in. I wonder if I have judged his pants or questioned what they were doing at the dry cleaner. One of his pairs could have been stapled to a green tag that reads “defective condition,” and I could have cried out in frustration that I couldn’t do more with a pair of pants that I have judged insufficient. I could have cried that I couldn’t give back his money and say, “this isn’t what you need. This won’t help you.” I don’t want to say that anymore.

In contrast to the low-maintenance dress I used to take to the laundry, during my first few weeks dating Michael, I took meticulous care of my appearance. I pulled out the nicer jeans from my drawer, the ones still fitted and vivid from disuse. I rotated tops from light, collared blouses to cardigans to snug V-necks — which I say in the plural form, but I really only had one or two of each. I cut my hair from waist-length to a comfortable, status-quo shoulder length. I even let my mom take me shopping for new outfits, a present I rarely allow myself.

I wasn’t dressing for Michael. That is, I wasn’t dressing so he would be interested in me; I wanted to date someone who was fine with my low-end style, and Michael was. Instead, I wanted to communicate something to those around us, to the nameless and numberless onlookers who didn’t know what to make of us because of Michael’s cerebral palsy. I wanted to say that I was capable and attractive, that Michael was funny and handsome and sharp, that Michael and I were a thing for real.

The work at the laundry is private, which seems appropriate, the way a dresser or a closet is private. For me, four hours from 7 to 11 at the laundry is a much-needed exercise in solitude. It’s a time-out from the complicated expectations and negotiations with other people. It is time to breathe.

I feel rewarded in my most invested moments, when pressing pants feels like a connection with people in the best, solitary way. I lean my body into the feeling that I am being trusted with someone’s palpable, personal coverings — a kind of sterile, safe connection, but a connection nonetheless. I’m not sure if this makes me an invader or a confidante.

This combination of privacy, space, and touch between myself and the wardrobe of others turns into a labor of love. I enjoy the success of physical labor and the way my mind and body work together, the way I notice my veins and tendons, the shape of my skeleton, the swing of my movement. I enjoy the aesthetic pleasure of seeing wrinkled pants gloss over into firm, even sleeves. I feel a sense of pride in being able to turn “sloppy” into “professional.” It’s a job that I relax in and requires little skill or learning, though I will eventually realize it requires a great deal of dexterity and balance that I have taken for granted.

When we dated, I found myself wanting to tell Michael about this shared space and the meditative, consecrated hours of patience. But, I was worried to admit that, along with probably having pressed his pants, I had likely wondered about where they came from and perhaps even pitied the owner. We had talked about far more vulnerable things, and generally, he knew my secrets — but admitting thoughts about the quality of his pants felt like a dark, betraying confession, and I didn’t want to imply that he needed to change.

As one part of the food-clothing-shelter trio, our clothes are intimate casts of our flawed, human bodies. I want that to be what laundry is about. Not just being clothed, but feeling at home in your personal fabric-shelter and the first impression of who you are. So, I lean into a suit with damp heat and the wrinkles exhale themselves. I move my hands from the steamer to the presser with a pair of pants, press the button, pick up the hand-iron and let it form the pants. I step back and forth in a tight area of cement while the pants move along.

Michael is highly skilled. He writes Supreme Court amicus briefs, tutored math while double majoring in math and economics, and has a spread of literature memorized from Dr. Seuss to Ecclesiastes. Yet, he couldn’t work at the laundry. That is, he could, but to do so would be a sentence of perpetual pain. Michael certainly works with his body through play or chores, but I imagine Michael working at the laundry for a summer — operating a press and steamer where a wrong move, easily avoided under normal circumstances, could leave a hand burnt and crushed. He would yearn to return to academically and emotionally challenging work and would fight to stave off the feeling of less-than-adequacy. Psychologically speaking, there is a pain about failing in the mundane that no amount of extraordinary success can relieve. We judge ourselves. We sentence our hearts to a whispered pain.

Eventually, I will realize that for Michael, taking his pants to a dry cleaner is less about looking like a professional each day of the week then about taking a task off his list and reducing his mental load. About embracing a system of cooperation, a system where different people fill in each other’s gaps. About having something crisp and clean to put on in the morning. About having some slacks to wear for his own space and pleasure. About suiting up for the job.

And some days, it’s about stepping into a courtroom wearing tailored shirts and his slim-fit suit like a boss.

When I do tell Michael about investing in a pair of pants and being worried about the owners to the point that I would sometimes cry, he is fine. He says, “It’s kind of a vindication,” which I don’t understand until he explains. “You’re so emotionally invested in, you know, a pair of pants. You want to know the story. Now you know one of them. And it isn’t a sad story.” 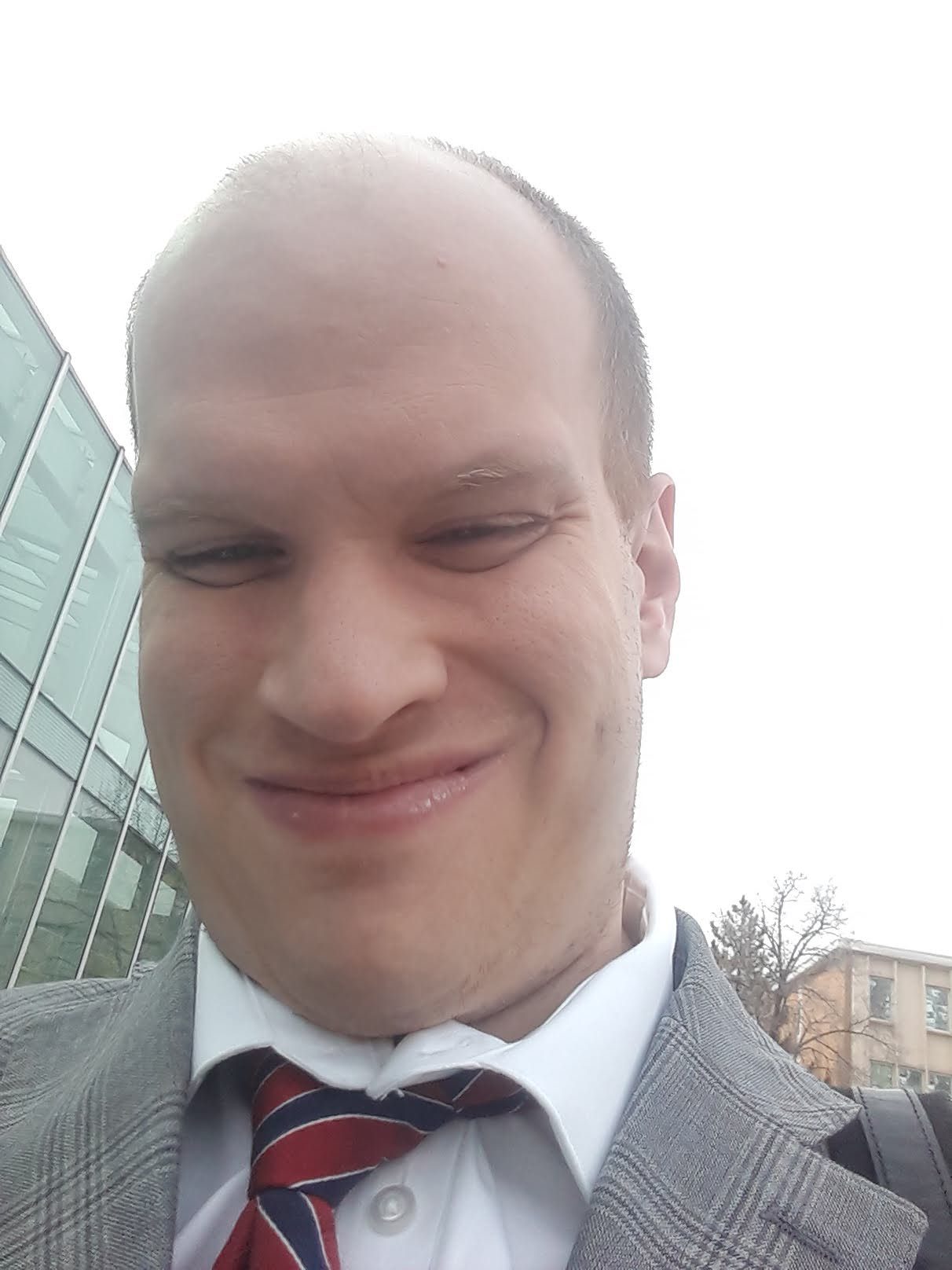 Try a creative approach to self-care

The Pencil Case group on The Mighty app uses journaling, poetry, affirmations and more as a way to reflect, slow down, connect and grow.

Alizabeth has Chronic Fatigue Syndrome and her husband, Michael, has Cerebral Palsy. They have two kids. Sometimes they tell stories. You can find them at https://www.youtube.com/channel/UC-8GWqVSirsJP2R6tfwGRhQ.