I never hear any of these announced on TV. Why isn’t the media paying attention?

Maybe it’s because they don’t know about it. After all, I found out on Facebook.  Last year, I watched my local news and national shows, hoping to hear about World Cerebral Palsy Day. I did not. Instead, I listened to Kathie Lee and Hoda discuss National Kale Day (also on October 7) announced on “Today.” A day dedicated to kale trumps World CP Day? This needs to change, so I started a call-to-action campaign to get the media to announce World CP Day on the air — just like they do for so many awareness days or months — dedicated to autism, breast cancer, bullying, and so forth. All of them are important. Cerebral palsy awareness matters, too.

World Cerebral Palsy Day is a movement of people with cerebral palsy (CP) and their families, including the organizations that support them, in countries across the world. Its vision is to ensure that children and adults with CP have the same rights, access and opportunities as anyone else in our society. Robyn Cummins, World CP Day Manager, explains in a 2015 media release (available here):

“Cerebral palsy is the most common physical disability in childhood and is also one of the least understood. There are over 17 million people living with CP and 350 million families, friends and supporters who care about them [according to World CP Day’s website]. But in many countries, people with CP are ‘invisible.’ They live out of sight, out of mind and out of options.”

“It is time to close the gap between the everyday circumstance and the real potential of people living with CP. Through World CP Day, we will join together to combine our resources, energy and knowledge. We will share our stories and best ideas. We will tell the world … I AM HERE  … WE ARE HERE.”

I wish the media knew that children with CP grow up to be adults with CP. Cover our stories, too. We are productive, talented members of society. And, most importantly, we are not all the same. There are different types and severities of CP — not all of us are in wheelchairs or unable to walk, as is often perpetuated in the media. What I would like to see change is the lack of coverage about CP awareness days, months, etc.

In addition, I urge journalists to change how they describe someone with CP in news stories. Please stop saying we “suffer” from cerebral palsy; this makes it sound like we are all victims of a horrible condition. Yes, there’s no denying cerebral palsy is challenging. It can be hard. How about focusing on the adult or child and her accomplishments instead?

Those of us with cerebral palsy want the world to know we are here. The media can help by announcing, and covering stories for, World CP Day on October 7, 2015 and every year thereafter. 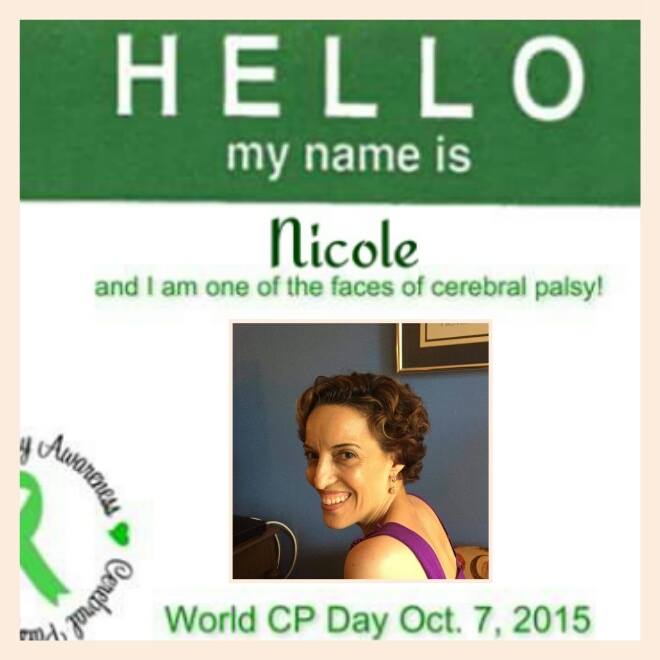 Nicole Luongo is an author, a disability advocate, and a writer dedicated to raising awareness for cerebral palsy. Her work has been featured on HuffPost, MSN and Yahoo.