A Request on Behalf of All Skinny Babies and Their Moms

It’s hard to be a skinny baby.

But my son, Branko, was a skinny baby. Having a rare chromosomal mutation meant his physical appearance was slightly different than average. He was skinny, and I mean really skinny, as in less than first percentile skinny. He had big, bulging, droopy eyes with permanent bags under them. His head was less round and more oval,with an unusually long neck due to extra space between the vertebrae in his spine, making him look slightly more giraffe-like than infant-like.

It must have been hard for the random strangers who, after asking his age, would wrinkle their noses in disbelief. It was as if I’d just told them Branko was actually a baby rocket scientist with a freshly completed PhD dissertation. Nobody wanted to believe he was only X number of months old. 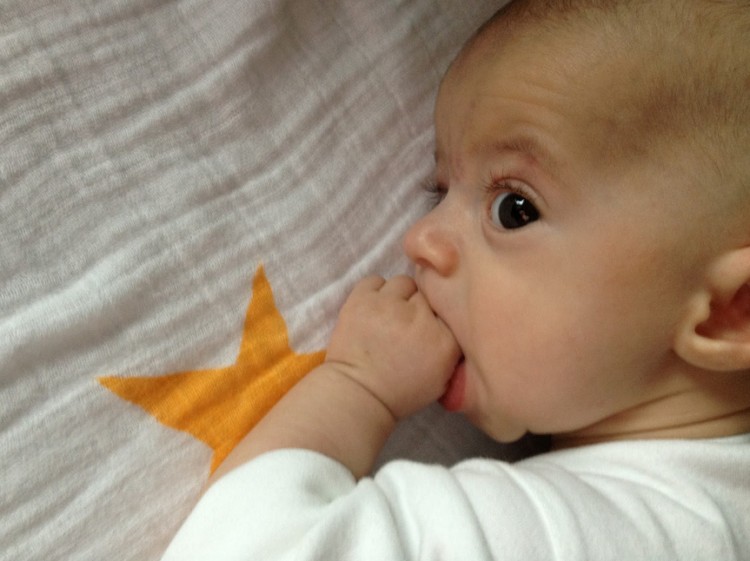 Their eyes and furrowed brows would radiate some obvious thoughts: Why doesn’t this baby weigh the same as my nephew, Johnny, who seems much fatter and juicier and should I remind this mother that she’s supposed to actually feed her baby??

Apparently, skinny babies can rapidly sting the eyes and hurt the brains of people who are used to seeing all those gushy, squishy, and round typical babies. Some new parents even provide weekly weigh-in updates on Facebook for their newborns, so everyone is aware their baby is not of the skinny variety.

It was easier in the wintertime because I discovered that if I put a turtleneck, legwarmers, winter boots, a one-piece snowsuit, two hats, and a scarf on my skinny baby, he could usually pass for “normal.” We’d even receive positive attention in public, including the odd “Enjoy every moment” or “It goes so fast” or on a rare occasion, “He’s adorable!”

Skinny babies don’t get much love in any sort of group situation, especially when there’s chubbier babies sitting around, being all cute and roly-poly. They suck up all the attention in the room, garnishing comments like “I want to eat you” or my personal favourite, “I just can’t handle the cuteness!!!!”

I used to wish for someone, anyone, to want to eat my baby.

Most of the time, I felt pathetic. As his mother, it was my number one job to feed him and keep him healthy. And I had failed. In fact, finding that one thing, the magic bullet to make him gain weight became my obsession for more than two years. I thought food was going to solve all his medical problems, like so:

In the end, my obsession with food and weight faded abruptly as soon as Branko had his first pneumonia at the age of 2. We had our first experience with the ICU, a close call with a breathing tube, and a brand new attitude toward eating.

Being forced to hope for your child’s survival makes all other hopes seem ridiculous and extravagant. We realized it didn’t matter if he ever ate kale, or tried carrots, or looked a bit plumper in the face. When we were discharged, I honestly didn’t care about what, or how much, he was eating. As long as he wasn’t on the verge of dehydration, I was happy.

Since then, we’ve realized that a scarce appetite, ongoing respiratory problems and a few sensory issues are probably what’s causing his lack of interest in food. He now eats the same thing every day for breakfast, lunch and dinner. I am sure a dietician would gasp in horror at the lack of variety, but whatever. He’s walking, talking and not lying in an ICU bed. That’s what matters.

If you are lucky enough to meet a skinny baby, or even a baby that doesn’t quite look exactly like every other baby in the room, pay close attention. Even though it might be hard to resist the delicious, chunky thighs of those other babies, please, you must resist. Hold that skinny baby, maybe pretend to eat him (but just pretend). The attention might make a new mom’s day.

This post originally appeared on Branko Has Funny Bones.