Married With an Ostomy: The Day I Wish My 13-Year-Old Self Could See

They never really came out and said it, but I’m pretty sure my parents thought I was destined to be a spinster.

I had problems making friends when I was younger, and being stuck in the hospital with Crohn’s disease for two years didn’t help. It also didn’t help that after ostomy surgery I was overweight from steroid medication and awkward from having been isolated for so long. I was the easy target for the teenage boys to make fun of, not to date. I didn’t have boyfriends like my friends did. I was the “single” girl in my group of friends.

My dad would always ask me, “When are you bringing a boy home?”

“Ugh,” I would think to myself and roll my eyes at him.

I’m pretty sure my parents thought my ostomy was the reason I wasn’t bringing boys home.

I think that it was actually one of the biggest fears they had when deciding if I should have surgery. Would Jessica be able to find love with a bag on her body? Would men find her gross? Would she be comfortable enough with herself to be open to love? I think they thought all those things. At least, I thought they thought those things.

Well, I can tell you that me not bringing boys home was not because of the bag.

Not dating in my teenage years was 100 percent the product of me being the most awkward and self-conscious* human being on the planet and not at all because of my ostomy. As soon as I escaped my awkward and strange teenage years, I had no problems dating. None.

*To be clear: self-conscious due to my weight and looks, not at all because of my ostomy.

Yeah, yeah, I say this all the time — I can do anything anyone with a full set of intestines can do! And it’s true! Finding love, however, was the one that always kind of had me worried.

For those who have followed me throughout the soap opera that was my love life, you know that dating with an ostomy wasn’t a problem.

OK, scratch that — finding boys to date was never a problem. Dating was a “pain in the butt that I don’t use,” because the boys were sometimes jerks. Oh, and them being jerks had nothing to do with my ostomy and everything to do with them just being immature young men. Dating sucked until I found Matt, the perfect match for me. We dated, we moved in together, and then we got engaged.

Holy crap, we got engaged. 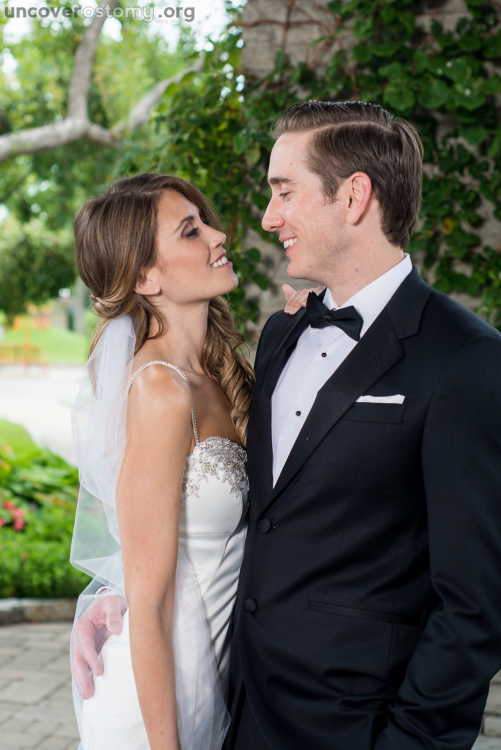 You know how most little girls spend years and years dreaming about their wedding day? I did all that, up until I got sick. I stopped, thinking it would never happen for me.

Until, well, about one year ago when all the things that have to do with weddings overwhelmed my entire existence — date, venue, food, drinks, invites, decorations… and, suddenly, I began to worry things that I hadn’t worried about in over 10 years:

Would my Crohn’s act up from all the wedding stress? (Even though work stresses me out every day.)

Would I have an ostomy leak during the reception? (Even thought it rarely ever happens to me.)

How would I get to the bathroom multiple times throughout the evening in what will surely be an extravagant dress as only I would wear? (Even though I hadn’t even picked my dress.)

What would I even be able to wear? Could I even wear a real wedding dress?  I didn’t know.

I don’t know what it was about the idea of a wedding, but I have not worried about how to dress with an ostomy, bathroom usage or leaks since I was 15, but here I was, worrying about it all over again.

I had forgotten, to be honest.

Thankfully, careful planning and attention made the day go off without a hitch and I can finally take that list called “things I thought I might not be able to do with an ostomy bag” and check off something new:

I didn’t get sick, even with the extra stress, I was able to keep my ostomy in check, I had the most amazing group of women to keep me going…

And I got to wear the (tightest, most form-fitting) dress of my dreams. 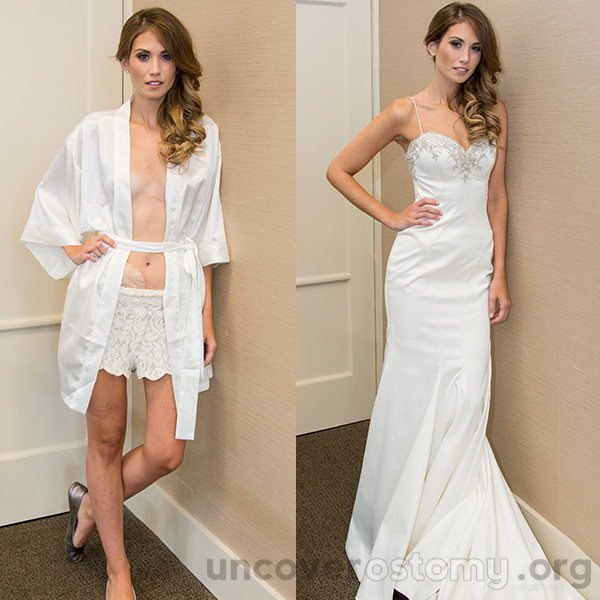 Looking back, I don’t know what I was so worried about. I go through every single day with an ostomy without any problems! This was just a good reminder not to take anything for granted.

It’s funny, because at some point during the reception speeches, it was said: If 13-year-old Jessica could be here now, she wouldn’t believe it was happening.

After all, without my ostomy, this day would never have happened.

Jessica is a model, actress and digital agency owner who was diagnosed with Crohn’s disease at 9 years old and who had life-saving ostomy surgery at 13. Since 2009, Jessica has been running the online awareness campaign, Uncover Ostomy, which aims to break the negative stigma surrounding ostomy surgery by educating the public about its necessity, as well as aims to encourage others who have had, or who are facing surgery to accept themselves.