23 Reasons You Might Not Notice Your Friend Has Depression

It’s wonderful to have a community that “gets it.” People who know the signs and symptoms of depression, and who can recognize it in others, empathizing with those struggling with it. However, we know not everyone has friends, family or co-workers who do get it, and it’s harder to have a conversation about depression with people who don’t understand. It’s so much easier to hide.

Because of this, friends and family members might not even know you’re living with depression. Whether because you’re actively trying to hide it, or because the signs are just too subtle, it can isolating when no one knows — let alone, understands — what you’re going through.

So, we asked our community members to tell us one reason their friends might not be able to tell they’re struggling with depression.

1. “I feel like a burden when I open up about my problems to them. I could be on the edge of suicide (and have been) and I won’t reach out because I ask myself, ‘What if that just makes this about attention?’ Everyone always says suicide is about attention. That’s never the issue though. And yet it keeps me from making that call or sending that text. That fear of being a burden, or that maybe this really is just in my head and I just want attention.” –Amber V.

2. “After years of practice I have become very good at plastering a smile on my face in front of my friends and acting as if I’m fine. On the outside I look as if I am functioning normally whilst in fact, I’m falling apart inside.” — Vicki C.

3. “Some people just don’t care enough to ask why you act a certain way. And when you’ve had depression over a long stretch of years, most people only know the depressed you. They just assume it is your personality. Things like tardiness and canceling get togethers are seen as irresponsible or rude or anything other than as symptoms of an illness.” — Sandra P.

4. “Because at first they all knew. I showed signs of depression. But suddenly, I started losing more friends because of it. They were scared and didn’t know how to respond to me. So now, in order to not scare anyone off, I have to suffer in silence just to please them. But it kills me to know that once I try to speak out, it only makes things worse.” — Cameron D.

5. Everyone assumes depression is moping out loud at all hours of the day, getting bed sores from never getting up and wearing black all the time with tears rolling down your cheeks. They want to see that in order for them to believe you’re depressed. They need to see that typical, cookie cutter vision of depression. If they don’t see that, then I am considered a poser seeking attention, weird or lazy. I have received those answers before so my, ‘I feel sad today,’ and my ‘I don’t want to do anything today,’ turned into ‘I feel tired,’ and ‘I’m sick and I can’t go anywhere.’ — Karla G.

6. “I overcompensate with happiness and focus on other people’s problems before my own. I hate opening up to people because I feel like a burden and like my problems are less than everyone else’s, so I need to make everyone else happy before I can tell people. I never end up telling people even if I have a breakdown.” -Ambra D.

7. “Because they won’t let me talk. They come and tell me what they want to say, then leave. The other reason is I was brought up not to show my emotions. This is a cultural difference. We read between lines. We don’t have to say and have to be able to understand each other’s emotions. But here in Europe, if you don’t say, they don’t understand. I used to explain this to people around me, but I gave up, as they won’t understand. They listened to me, but continue exactly the same as before. They told me I was too sensitive. So now I don’t talk about it.” — Riko S.

8. “I struggle alone in my head. I very rarely speak about any of the stuff going on up there. I do stay away from people more when I’m going through bad times.” — Michelle M.

9. “I push them away. I don’t have friends. I feel like I annoy them with my friendship. -Damaris A.

10. “They don’t notice because I pull away. Sometimes slowly, sometimes quickly. And they don’t know that’s a sign an episode is coming on. I’ve lost good friends because even though they know I have depression, they still don’t get how it can become overwhelming and all consuming. So, I pull away from them and soon… there are no more friends.” — Sara B.
11. “Internalization and familiarity. For so many, it’s all they have known for so long, which means many people in their lives only know them in that state of depression. How can people know the difference if that’s the only way they know you? People who live with depression don’t always manifest it outwardly. You can live as a highly functional individual in society and struggle with depression.” — Brett S.
12. “People only seem to notice when I’m manic because it’s harder for me to control. I’ve become very good at hiding my depression because it’s so much harder to explain to someone why one week I’m the most energetic and happy person in the world and the next, I don’t want to do anything except cry and sleep.” — Kaitlyn L.
13. “I’m in school studying to be a counselor and people think counselors don’t struggle with depression. Little do they know, that’s usually the reason people want to be counselors — to not only help others not feel the same, but to understand themselves without having to seek out help for an illness that others think is a burden or something that doesn’t exist.” –Lindsay C.
14.” Opening up about something that is such a struggle… isn’t the easiest thing to do. Regardless of how close you and your friends are, it’s a hurdle that not everyone is able to cross with the people in their life. Even if they are great friends who make sure to call and ask about you, telling them is just so hard. It takes a lot of energy that just isn’t there when you have depression.” — Maria K.
15. “Instagram. I can post a pretty picture of a flower or a selfie of me ‘smiling’ and everyone assumes that’s the entirety of my day. That I’m happy and fine because I took pictures when it’s nothing more than a coping mechanism to help me distract myself even for a split second when I have to struggle alone. People don’t believe how bad off I am. -Gaytastic A.
16. “I am embarrassed to admit when I am feeling low or sad, in fear that I won’t be taken seriously. I am afraid I’ll get overlooked or that they’ll roll their eyes at me and think to themselves, ‘Not again.’”  –Ashley V.
17. “You have to pretend you’re OK. Dropping any mental health problems into any friendship (unless you’re lucky enough to have a true friend) is like farting in a full Lyft, you’re no longer classed as “normal.” It’s easier to avoid friendships. You feel a burden so you decline offers to socialize. Eventually people stop asking. I’m bipolar and a bit proud of it. I’m surviving, I keep my illness hidden to save the embarrassment of trying to explain why I couldn’t get out of bed yesterday. Unless you’re a warrior of mental illness, it’s a dirty secret no one wants to talk about.” — Lisa M.
18. “No one ever seems to take me seriously. They always say stuff like, ‘Oh yeah, I’ve been soooo depressed today too.’ They write it off as just another complaint. And I also feel like I’m bringing people down or scaring them if I try to seriously talk about it so I rarely do.” –Ameelvi Y.
19. “I’m too guilty to open up because then I feel like I’m letting people down or disappointing them. I don’t want to make other people feel like they’re not enough, or that they didn’t put enough time into supporting me.” — Maria Z.
20. “When I’m with my friends they make me feel like there’s nothing wrong with me. My depression strikes the hardest when I’m alone, or simply around people I don’t know. My friends bring out the best in me, and I never let them see the worst of me.” — Brianna L.
21. “I never feel safe enough in myself to let it all out, I hide behind smiles, bravado and fake capabilities. Never mind my brain telling me I’m completely worthless and useless.” -Kristie T.
22. “My defense mechanism is humor. I deflect my inner turmoil by being bubbly and funny when I’m around others. I’ve gotten so good at it, that even my significant other, closest friends and family can’t tell when I’m struggling except that maybe I don’t socialize as often. I keep my demons bottled up pretty tightly. It’s only when I’m alone that they manage to claw themselves free.” — Elaina M.
23. “It is easier to hide it than try to explain it. There is just so much so many don’t understand about it. I don’t have the energy for all that, so what little energy I have left is just used to hide it all.” — Megan H.
We want to hear your story. Become a Mighty contributor here. 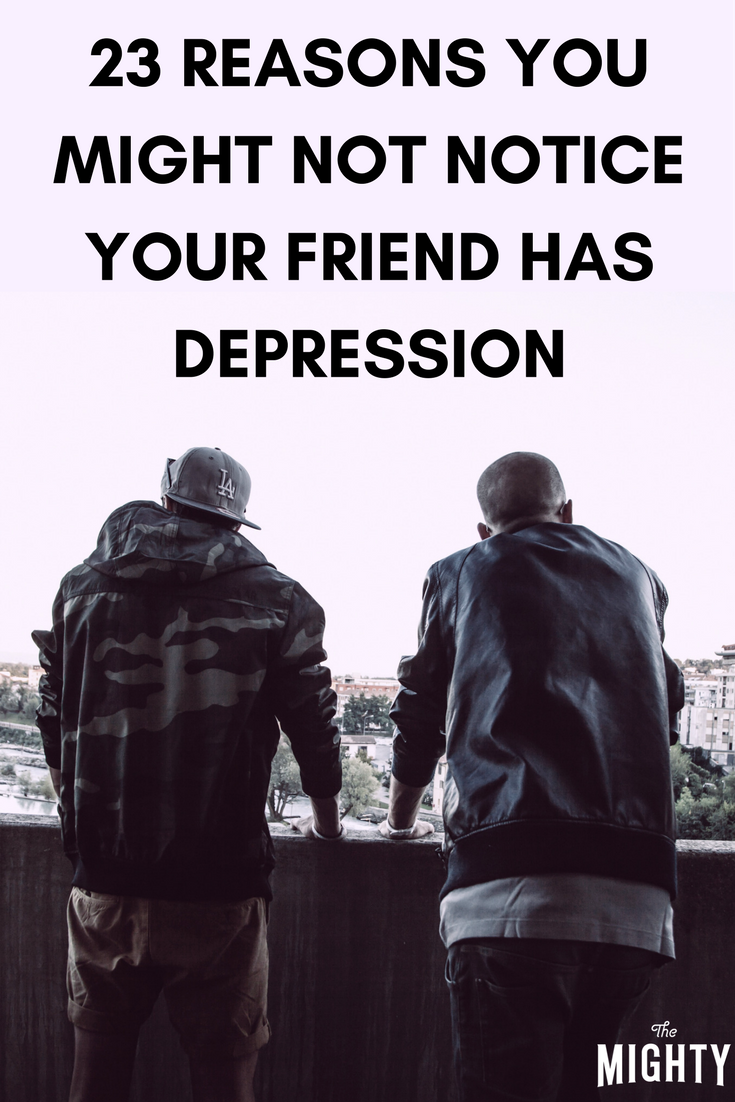 Danielle Lowe is a board certified music therapist specializing in adults with mental illness and is heavily involved in mental health awareness, specifically eating disorders. When she is not singing and playing the guitar, she can be found going to concerts and eating ice cream sandwiches.