7 Small Victories to Celebrate When You're Battling Depression

1. When you call your doctor before it’s an emergency.

I usually avoid calling my doctor’s office at all costs — until it becomes a suicidal emergency at midnight — and even then, I’m reluctant. This time, I woke up in tears, curled up on the floor and decided I wasn’t going to “tough it out” this time. At 10 a.m., I called. By noon, we had a plan of action. And shockingly, I didn’t feel like a weak, pathetic, failure for breaking  down so “quickly.” In fact, it was a relief not to torture myself moment by moment the rest of the day.

2. When you wear “real clothes” when you don’t have to.

It might be a given that you can’t wear leggings and T-shirts to your place of employment. But these days, people wear pajamas to the grocery store, so there is even less incentive to get out of your sweatpants to do anything. But the first time you waltz in to the pharmacy to pick up your prescription in real jeans — you should take a moment a feel proud. Because that takes more effort than many people will ever understand.

3. When you do something “extra” for your health.

Learned how to bake a chicken? Exercised? Meditated? Took vitamins? Doesn’t matter. Anytime you are able to add even the tiniest hint of a healthy habit to your life (even if you only do it once, it counts) that is a sign you are trying. And trying means more than anything. So give yourself credit for trying to be the healthiest “you” possible.

4. When you smile at someone and it’s not forced.

Let’s face it. If you live with depression, you probably force a lot of fake smiles. It’s just part of the survival mechanism. But every once in a while, something brings out a genuine moment of happiness, and it shows. A good friend, a good joke, a good meal or even something as simple as when your doctor isn’t running 45 minutes behind schedule. Anything that makes you smile without having to think about it is worth holding on to.

5. When you accomplish that dreaded task.

Washing bed sheets is like climbing Mount Everest to me. So many things to take off, and then put back on. And it has to be done that day or I won’t have a bed to sleep in. I can’t just shove them in the closet haphazardly like other laundry. When that last pillow gets tossed on the bed, it is the ultimate victory. Grocery shopping? Showering? It doesn’t matter what it is — you deserve to feel good for managing to do it.

6. When you get out of bed right when you wake up (not two hours later).

Every morning I wake up. And a few hours later I get up. I don’t want to. I toss and turn trying to go back to sleep and escape the day. I stare at the ceiling anxiously going over all the things I should be doing besides laying in bed. I pretty much do anything except actually get out of bed and face the day. So if I manage to wake up and not stall until noon, that’s a huge deal. Anytime you find the strength to face the day head on, it’s something worth celebrating.

7. When you feel better (even when you still feel bad).

Depression can suck the life out of you. Drain you of energy, joy, everything. Sometimes we get so caught up in wanting to be “ourselves” again, that we don’t notice the little steps we are taking towards getting better. It’s OK to be excited that you feel even a slight improvement. That doesn’t mean you’re going to settle for anything less than feeling the best you possibly can. But it’s important to enjoy those moments when — though you might still feel terrible — you feel just a little less bad than you did before. 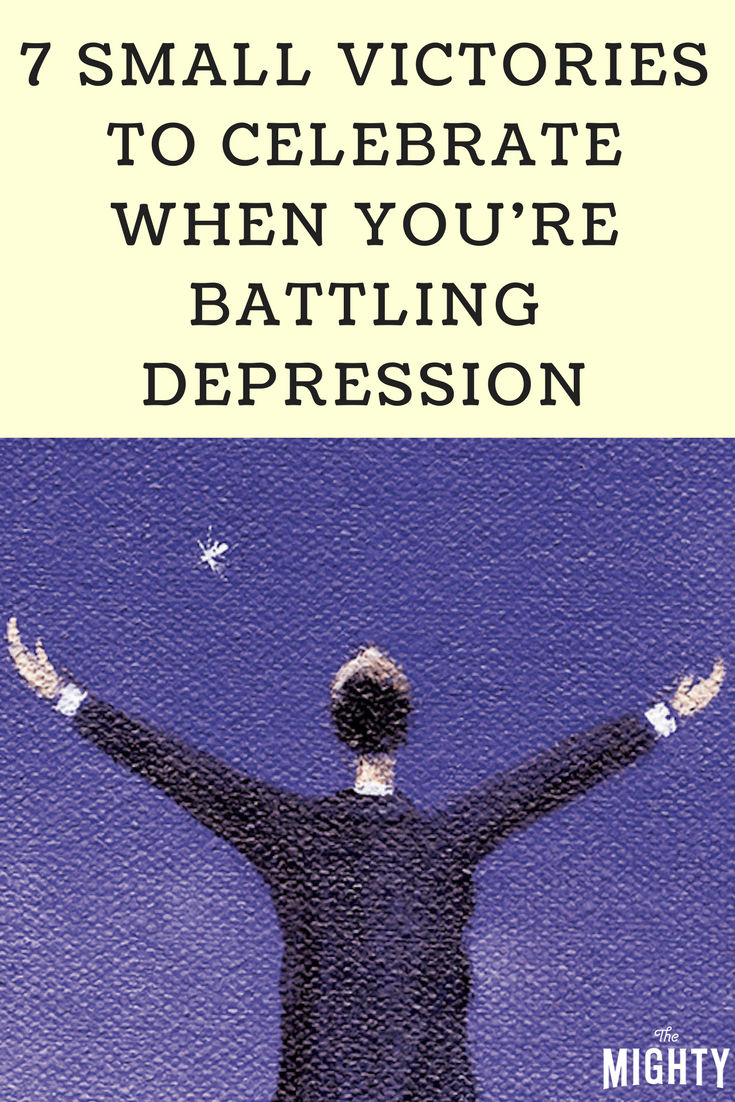 Hockey Obsessed Introvert. Native Texan (Tornado Alley Veteran) J’essaie d’apprendre le français par moi-même. Refractory depression, severe anxiety, seizures, fibromyalgia, and others. I aim to make everyone’s life better, even for a moment - through patience, thoughtfulness, compassion, and genuine love. If my darkest hours and hard lessons can reach even one person, it was worth it. ⭐Brown ⭐Tatum⭐Hadden My friends, family, and doctors do God’s work. They are my greatest blessing. I owe them everything. I owe them my life. ❤ I’m a work in progress, but I do my best. ❤