Why Fake Service Animals Are a Real Problem

When I first started using a service dog – about a dozen years ago – I was shocked by something that happened as my husband and I approached the checkout lanes at Walmart one day. A dog began barking violently at my dog, and when we looked around, we saw a woman trying to get a muzzled Doberman under control. Clearly he wasn’t a trained service dog.

That was only the first of a plethora of encounters we’ve had over the years with people passing their pets off as service dogs, probably because they thought it was cool to be able to take them everywhere with them. Over the years I have noticed this is a rapidly-increasing trend, and while I am no longer shocked, I am certainly angered.

Currently there is no legal requirement for service dog training by a licensed professional, and no official testing and certification for service dogs. I believe this is a necessary thing, as it allows people to train their own dogs to be service dogs. I was a professional dog trainer before I became disabled and decided I could greatly benefit from the help of a service dog. I adopted a year-old Labrador retriever and trained him myself, and he changed my life. In the years since, I have helped a number of other people train their dogs to be service dogs – and I can tell you that not every dog is well-suited to the job. In fact, few are. A dead give-away that a dog is not a well-trained service dog is its behavior. Social interaction is the first and most important element of training these dogs.

But what defines a service dog, legally?

According to the ADA, service animals must be allowed to accompany their disabled partners into any place the general public is allowed to go. As of 2011, the law changed to specify that only dogs are recognized as service animals. Further, the law specifies:

A service animal is a dog that is individually trained to do work or perform tasks for a person with a disability. The task(s) performed by the dog must be directly related to the person’s disability. In certain special circumstances, specially trained miniature horses may be considered service animals.

A service animal must be harnessed, leashed, or tethered, except in very special circumstances. In that case, the individual must maintain control of the animal through voice, signal, or other effective controls. 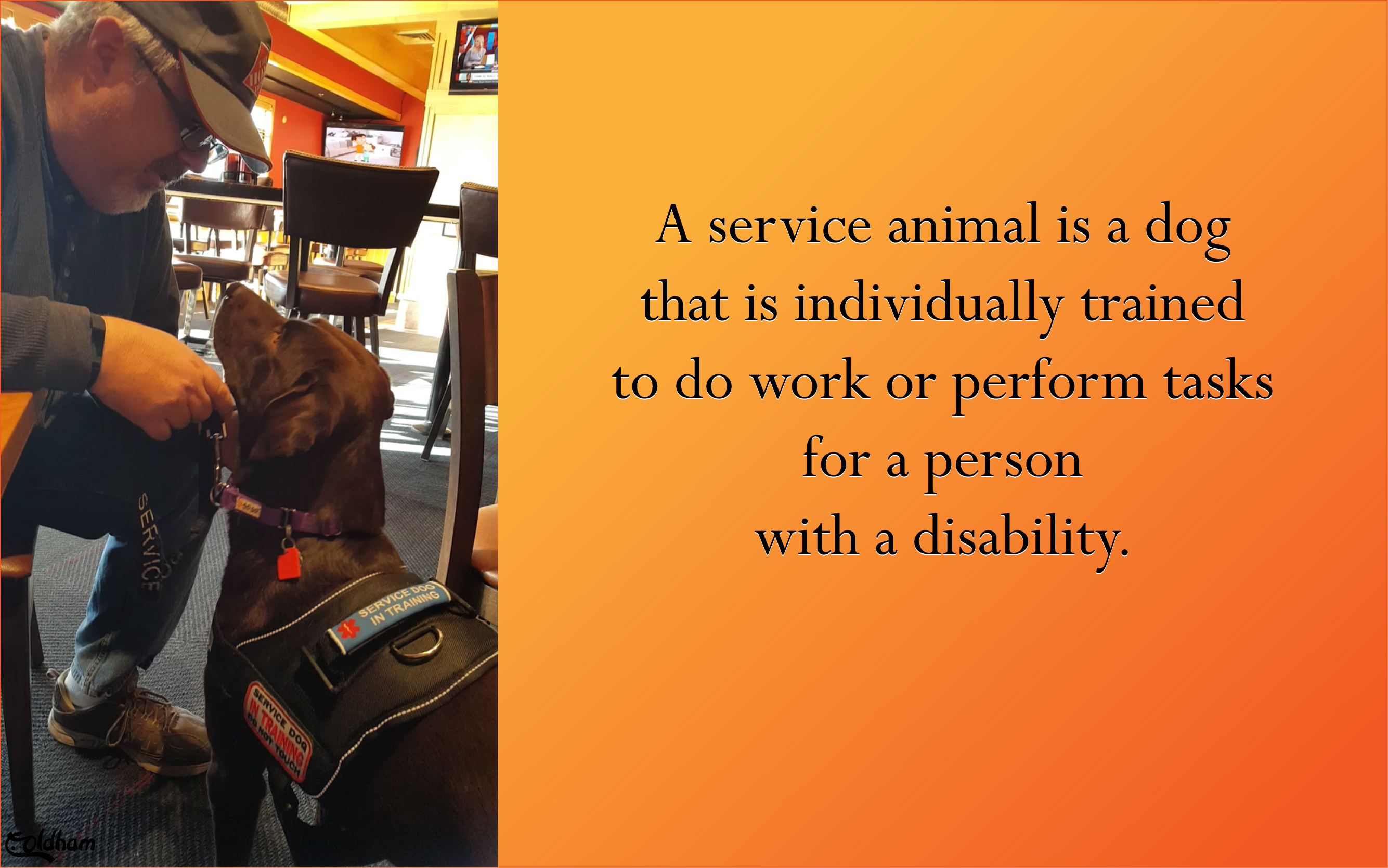 A major airline recently announced changes in its policies on transportation of service dogs and emotional support animals. This follows a number of serious incidents occurring on flights, such as a dog attacking another passenger, and another dog barking incessantly and lunging at passengers throughout a flight.

Finally, travelers with an emotional support animal must acknowledge that should the animal not remain under control, or engage in inappropriate behavior, it may be denied boarding or be removed from the plane.

Why the different handling of emotional support animals?

Interestingly, U.S. laws governing air transportation provide their own definitions of service animals and their access rights. According to the Air Carrier Access Act (ACAA), a service animal is:

“Any animal that is individually trained or able to provide assistance to a qualified person with a disability; or any animal shown by documentation to be necessary for the emotional well-being of a passenger.”

While this law does not require the animal to perform actual tasks to mitigate its human partner’s disability, it does provide that:

“All service animals must be trained to behave appropriately in a public setting.”

Air carriers are allowed to require documentation that an animal is in fact an emotional support animal, and that the passenger requires its presence. They may not require such documentation from travelers with trained service animals.

How do fake service animals cause a problem?

Legitimate service dogs are trained not only to perform tasks to assist their disabled partners, but to be non-disruptive in public settings. A trained service dog does not act aggressively towards people or other animals, does not use the restroom in an inappropriate place, and does not jump on, growl at, or bark at people. In fact, a well-trained service dog often seems to disappear into the background. This might be observed when a server or another patron at a restaurant gasps as a dog comes out from under a table as his human partner gets up to leave. Nobody even knew he was there.

Perhaps the primary issue with fake service dogs is public perception of service animals, and the very real possibility of laws being created to stem the tide – laws that would limit the availability of qualified service animals to people with disabilities.

Consider this scenario: While at the checkout counter at a grocery store, you hear a small dog barking nearby. When you turn around, you see a little dog – without a collar or leash, and certainly no vest – running out from behind the next counter over. The dog repeatedly runs out to challenge customers who are trying to leave the store. The customer at that check stand is apparently the owner of the dog, and is ignoring him as he chats with the clerk.

This was a very real occurrence I experienced a few years ago, and that particular chain of stores had adopted a policy of only asking people with dogs this question: “Is that a service dog?” If the answer was “yes,” they were allowed to enter. In other words, the store didn’t want to challenge people claiming to have service dogs, afraid of being accused of discrimination.

Consider another scenario: A woman using a wheelchair enters an elevator with her service dog –- a yellow Lab –- at her side. The elevator doors open on the next floor, and in walks a woman with a tiny poodle in her purse. As the doors close, the poodle spots the lab and leaps from the purse, attacking the large yellow dog. By the time the diminutive attacker was pulled off its victim, the service dog was bleeding from bites to his face.

When the owner of the service dog makes a complaint to the police and the business owner, the poodle-wielding woman claims the poodle is a service dog. When pressed, she changes her claim, saying her dog is an emotional support dog. Finally, the woman admits that her dog is just a pet, and that she likes to bring the dog with her everywhere she goes.

This type of behavior puts genuine service dogs – as well as their partners – at risk for injury.

As a non-service dog user, how would these occurrences make you feel towards the issue of service dogs in the future? What if on your four-hour flight for a business trip, you had to sit two rows behind someone with a supposed “service dog” which was nervous and barked incessantly? What your service dog was harassed or attacked by an untrained, falsely represented dog?

On another note, harming a service dog is a crime in most states, and damages caused by a dog falsely represented as a service dog can be claimed in a civil lawsuit. If a service dog were to be killed or disabled, the costs of veterinarian care, as well as the price of the dog and the costs of training and upkeep are likely to add to a very large judgment indeed.

I have suffered with ME/CFS for 28 years, and Fibromyalgia for 8 years. I have joined the fight for those with chronic pain conditions, and invisible disabilities. I fully admit that I do this for my sanity.