When my son, Braxton, first got his G-tube at 2 weeks old, the first question I was inevitably asked after explaining his tube to family, friends and strangers was, “So will he ever be able to eat by mouth?” For the longest time, my response was, “I don’t know,” and we genuinely didn’t know. Once we started working with a speech therapist and making progress, “I don’t know” turned into “Yeah, more than likely he will be able to eat like you and me, but he’s still learning.” 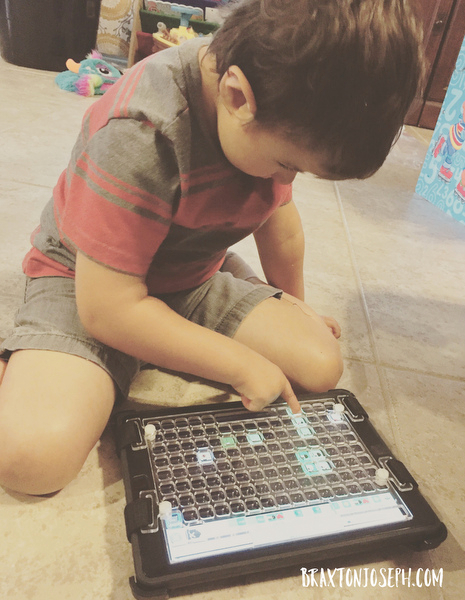 Nearly three years later, you would never know there was a time he couldn’t eat. He still uses his tube for liquids, but he eats all of his meals by mouth. He still only eats purees, and we continue to work towards table food, but he is eating.

Our journey to communication has been similarly riddled with questions and uncertainty. When we learned of his hearing loss, we quickly began learning sign language. Family and friends asked, “Do we need to learn sign language, too?” I didn’t know. Braxton didn’t pick up sign language as quickly as we had hoped, and it seemed almost pointless to make our family learn, too. Instead, we encouraged them to continue speaking to Braxton just as they would any other child. That constant exposure to language was still just as critical. We hoped for verbal language but were never sure if it would come.

When we finally received the diagnosis of Rubinstein-Taybi syndrome (RTS), we learned from other families that many of the children are nonverbal and use sign language or a communication device to speak. There are many who have at least some words, and a few who are quite verbal. Where would Braxton fall on that spectrum? I don’t know.

By that time, we had already started on the path to high-tech Augmentative and Alternative Communication (AAC), and the diagnosis confirmed this was the path we needed to pursue, always holding onto the hope of verbal speech. We saw little progress at first, but we saw enough to keep hope alive and to continue this path. My dream for him has always been (and will always be) verbal speech, but the goal is communication. Communication using whatever means necessary.

Since we’ve been using Speak for Yourself, a communication app on the iPad, quite heavily in the past year, the inevitable question has been, “So will he ever speak?” I don’t know.

I don’t know if he’ll ever speak.

I don’t know if we’ll ever hear his precious little voice.

I don’t know what the future holds. We simply hope for the best.

Here’s what I do know…

I know that by pursuing AAC we’re giving him a way to communicate with us now.

I know AAC is giving him the best chance to succeed.

I know exactly when he wants hugs and kisses, because now he can tell me with his talker.

Vanessa Vaughan is a work-at-home-mom of three children. It is the journey of her son, Braxton, that thrust her in to the special needs world as Braxton was undiagnosed for two years before finding a rare diagnosis of Rubinstein-Taybi Syndrome. His older sister, Aileen, has been amazing with her little brother and has her own struggles with ADHD and Anxiety. Brooklyn is the youngest who joined the family in January 2017. Through Braxton’s diagnostic journey, Vanessa met a local non-profit, U.R. Our Hope, that specializes in helping families with Undiagnosed and Rare medical disorders and she now serves on their Board of Directors.