“Born This Way” takes home two more Emmy’s, one for Cinematography and the first-ever Emmy for Casting.

A&E Network’s critically acclaimed and award-winning original docuseries, “Born This Way” keeps adding up honors, showing there is a place for disability themes. After bringing home the Emmy for Outstanding Unstructured Reality Series in 2016, this series, starring a cast with disabilities, received six Emmy nominations this year and won two Emmy’s at Saturday night’s Creative Arts Emmy Awards for Casting for a Reality Program and Cinematography for a Reality Program.

Produced by Bunim/Murray Productions, “Born This Way,” an unscripted reality show, follows a group of seven young adults with Down syndrome along with their family and friends in Southern California. Because its focus is on showing their everyday lives, including employment, efforts for independent housing, loves and more, “Born this Way” breaks down stigmas surrounding disability.

A Focus on Diverse Casting

Show creator Jonathan Murray, the innovator behind the first-ever reality-show, “The Real World,” and many other hit shows including, “Keeping Up with the Kardashians,” said the cast members of “Born This Way” remind all of us that, “every individual has something to contribute.”

“In thinking about the show, we wanted to focus on the ability within the disability and I think that is what is exciting to see,” said Murray. “We also are very proud of the fact that our cast is very diverse. ‘Born This Way’ has a cast that includes people who are African American, Hispanic and Asian. This is a breakthrough for those minority communities as well.”

This is the first year the Television Academy presented an award for Casting for a Reality Program, which Sasha Alpert and Megan Sleeper won for “Born This Way.”

“Everyone experiences powerful stories,” Alpert said. “By not including a diverse group of people, we are limiting our ability to tell compelling stories. If we make television that doesn’t embrace the various populations around us, we limit the narratives we tell.”

Also during Saturday’s first half of the two-night Creative Arts Award presentation at the Microsoft Theater, Bruce Ready, cinematographer of “Born This Way,” took home the Outstanding Reality Cinematography Emmy. The awards on Saturday evening were presented for reality, documentary and animated programs. 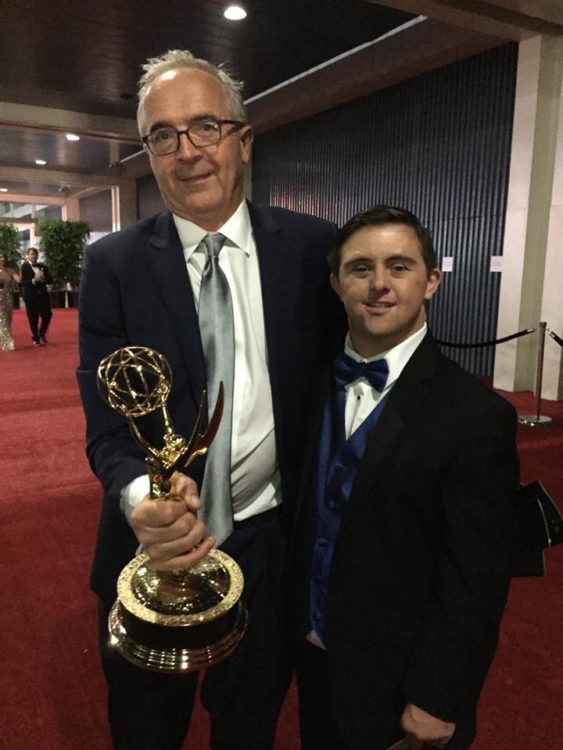 “Born This Way” cast members Rachel Osterbach and John Tucker made history when they became the first individuals with Down Syndrome to present at any major awards ceremony when they presented awards in three categories at the Creative Arts Emmys. 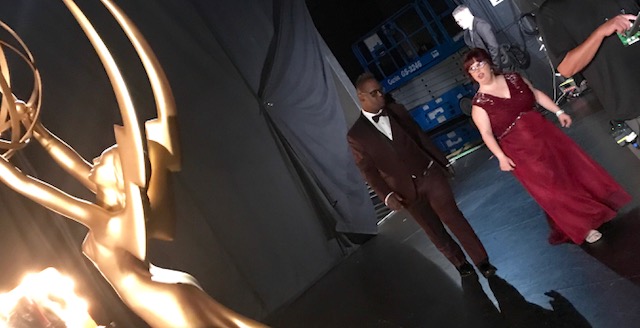 “Rachel and John graced the stage like true professionals to rousing applause,” said Gail Williamson, a talent agent who focuses on clients with disabilities at Kazarian, Measures, Ruskin and Associates Talent Agency. “When doctors told their parents about the diagnosis of Down syndrome and listed what they thought their children’s future would be like, they never thought to include they would be presenters at the Emmy Awards some day.”

“In an evening that emphasized ‘inclusion’ and ‘diversity,’ it was powerful to have Rachel and John, who both have Down syndrome, included in the diverse group of award presenters,” Murray added.

RespectAbility, a nonprofit organization fighting stigmas and advancing opportunities for people with disabilities, has been honored to consult during the creation of “Born This Way” and congratulates the entire team for its hard work in achieving this continued recognition.

Jennifer Laszlo Mizrahi, RespectAbility’s president who herself has a disability, and who knows what it means to raise a child with multiple disabilities, said: “I am thrilled that the Emmy’s see the value in showing real people with disabilities and their powerful lives on TV. For generations TV-viewers saw people with disabilities through the lens of the Jerry Lewis telethon. Though it was well intended, it showed people’s inabilities and used a lens of pity. ‘Born This Way’ is empowering and uplifting. It shows, as one member of the cast frequently says, that the public should not ‘Limit me.’”

The Ruderman White Paper on Disability in Television shows that disability often is absent from mainstream film and television — both the depiction of it, and even when a character has a disability, the actor often does not. According to the report, an actor pretending to have a disability plays more than 95 percent of characters with disabilities. Furthermore, according to a recent report by The Media, Diversity, & Social Change (MDSC) Initiative at USC’s Annenberg School for Communication and Journalism, only 2.7 percent of all speaking or named characters in film were shown to have a disability in 2016 (up from 2.4 percent in 2015). None of the leading characters were from an underrepresented racial/ethnic group or the LGBT community.

“By winning the Emmy for casting, A&E’s ‘Born This Way’ has broken the glass ceiling for people with disabilities of all backgrounds,” Mizrahi added. “Programs like ‘Born This Way’ that feature people with disabilities, or that tackle disability issues in a positive light, can be successful both critically and financially. Audiences want to see strong, capable role models with disabilities. By focusing on showing these young individuals’ everyday life choices regarding employment, living independently and dating, ‘Born this Way’ breaks down stigmas surrounding disability.”

Murray agrees that shows like ‘Born This Way’ and more diversity in Hollywood are good business.

“Hollywood has been really, really slow to recognize the diversity of this country,” he said. “I think it is catching up fast now. And I think it’s realizing that diversity is good business. I don’t think it’s necessarily because it is altruistic. I think they are recognizing that TV shows will do better if they reflect what the country is.”

Recently, “Born This Way” was chosen as one of six honorees for the 2016 Television Academy Honors, an award that recognizes “television programming that inspires, informs and motivates.”

“By honoring and embracing diversity on television, ‘Born This Way’ is uniquely redefining the art of honest storytelling and altering the way society views individuals with differences,” Elaine Fontain Bryant, EVP and Head of Programming for A&E said.

“What I would like to see is that more shows have a diversity to them where the diversity is not the point of the show,” Murray added. “I’d like to get beyond the labels to accurately reflect what is going on in our country today.”

Watch the Creative Arts Emmy Awards on FXX on Saturday, Sept. 16 at 8:00 p.m. ET before the highest-profile categories are awarded in a ceremony telecast live on CBS on Sunday, Sept. 17.

Lauren is the Vice President, Communications, of RespectAbility, a nonprofit organization fighting stigmas and advancing opportunities so people with disabilities can fully participate in all aspects of community, and managing editor of The RespectAbility Report, a publication at the intersection of disability and politics. As an individual with an acquired invisible disability - Reflex Sympathetic Dystrophy - she writes about the intersection of disability, employment, Hollywood and politics. She’s also the proud mommy of a five-year-old, navigating life as a mom with a disability. To reach her, email LaurenA@RespectAbility.org.