How 'Born This Way' Has Opened Minds and Doors

There’s a driving purpose for the families who agreed to participate in the Emmy Winning Docu-Series “Born This Way”: to show parents with young children or a prenatal diagnosis of Down syndrome the possibilities for the future. With Megan’s keynote Speech, “Don’t Limit Me,” along with the risks the parents of “Born This Way” encourage their adults to take, the show has inspired other families to remove limits and support their children’s and adult’s dreams. But the show has also inspired many typical people to give people with Down syndrome a chance and remove the prejudices they previously held.

“Born This Way” first aired on December 8, 2015. I was curious about how introducing seven adults with Down syndrome to the world, in the comfort of their living rooms, would change perceptions and open doors for others with Down syndrome.

Here’s what I found:

According to the Annual Disability Statistics Compendium there were four times the number of people with disabilities employed in the US in 2016 vs 2015. 343,483 new jobs were filled by people with disabilities. If that’s not proof of stigmas and prejudices being removed, I don’t know what is. I can’t wait to see what the 2017 and 2018 numbers reveal. 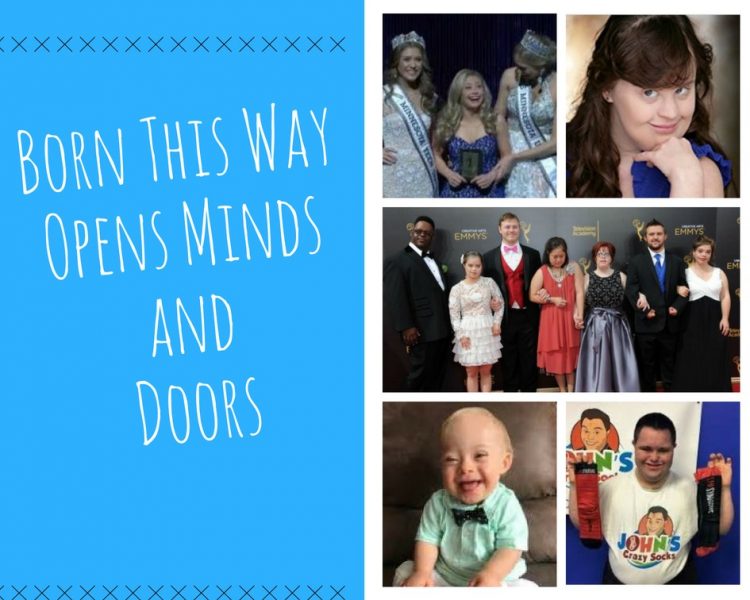 Specifically for people with Down syndrome I’ve prepared a list of the firsts:

For spring 2018 we found that Brooke Hebert joined the Alpha Sigma chapter of Phi Mu and became the very first Greek woman with Down syndrome.

Jamie’s understudy, Edward Barbanell, who you may remember from the movie, “The Ringer,” is the first man to star in an Off-Broadway play, they both are paving the way for future thespians in live theatre.

First person with Down syndrome to appear on “The View” was Mia Armstrong in May 2018.

The World’s First Ever Down syndrome improvisation troupe has been formed in Ohio.

First Gerber Spokesbaby with Down syndrome Lucas Warren was announced in February, 2018. Gerber started the Spokesbaby program 91 years ago.

Blake Pyron of Blake’s Snow Shack  — the first to open the New York Stock Exchange March 3, 2018. He was also the first person with Down syndrome to own his own business in Texas in 2016.

December 2016 John Cronin opened his business, “John’s Crazy Socks.” But that wasn’t the big first. A year later in 2017 he announced the revenue for his first year in business was $1.4 million dollars. Now that is an impressive first.

November 2017, Mikayla Holmgren became the first woman with Down syndrome to compete in a Miss USA State Pageant, where she was awarded the Spirit of Miss USA and the Director’s Award.  She then went on to win the very first ever Miss Congeniality at the Global Beauty Awards in Seattle in March 2018.

September 2017, Rachel Osterbach and John Tucker of the “Born This Way” cast were the first people with Down syndrome to present at a televised awards show when they broke the glass ceiling and presented at the Creative Arts Emmy’s.

Andrew Harris climbed to the 13,776 foot summit of the Grand Tetons in August 2017 with the help of future brother-in-law and Pro Skier Max Hammer.

In March 2017, Melanie Segard, a 21-year-old Frenchwoman, fulfilled her dream by presenting the weather on TV National Public Channel France 2.

December 2016 Asher Nash became the first model with Down syndrome for OshKosh B’Gosh… after 120 years.

Isabella Springmuhl of Guatamala is the first fashion designer with Down syndrome to show a collection at London Fashion Week in 2016.

Also in 2016, Chelsea Werner was the first model with Down syndrome to film a commercial for H&M.

Sam and Matty’s 2014 Kickstarter Campaign was a huge success and the resulting movie, “Spring Break Massacre,” debuted in 2016, the Zombie movie they had been talking about for years.  Then they scored another big first when they appeared on the Conan O’Brien show in July 2016!

“Born This Way” was the first television show featuring a cast of people with Down syndrome to win an Emmy. Outstanding Unstructured Reality Program.

After battling for years for the right to compete Garett “G-Money” Holeve finally realizes his dream of fighting in a sanctioned MMA Match in October 2015.

Again breaking another barrier, Jamie Brewer, who is a television star in her own right as a cast member on “American Horror Story” debuted as the first Runway Model with Down syndrome in New York’s Fashion Week in February 2015 modeling an original design by Carrie Hammer.

May 2013 Jimmy Jenson, 48, was the first man with Down syndrome to complete the New York Marathon in a little over eight hours, encouraging everyone he passed along the way to keep going.

In 2013, Angela Bachiller was elected as a city councillor in Valladolid, Spain.

Karen Gaffney was the first to receive an Honorary Doctorate degree from the University of Portland in May 2013. But she’s broken more records than that. Widely known for her 2001 completion or swimming a relay across the English Channel and her 2007 swim across Lake Tahoe.

In May 2013 Megan McCormick was the first person in the United States with Down syndrome to graduate with honors from a technical college, Bluegrass Community and Technical College.

In May 2012 Tommy Jessop made history as the first person with Down syndrome to professionally play the title role of “Hamlet” in Blue Apple Theater’s touring production.

March, 2012 Antoinette Mendoza, 45, completed the Los Angeles Marathon. The article says she’s one of the first two women to complete a marathon, but I can’t find an article about who the other one is.

Elisha “Eli” Reimer is the first to climb Mount Everest in March 2013.

Elad Gevandschnaider was the first person with Down syndrome to serve in the Israeli Army in 2012.

Yulissa Arescurenaga is the first certified Zumba instructor with Down syndrome receiving her certificate in 2012.

2010 Tim Harris opened “Tim’s Place” in Albuquerque, New Mexico. (Tim is off to new adventures and may open another restaurant in the future.)

Chelsea Warner was the first person with Down syndrome to compete in USA gymnastics in 2008.

April 2007 Simon Beresford was the first runner with Down syndrome to complete the London Marathon.

In 1996 Stephanie Ginnsz was the first person with Down syndrome to be featured as a lead actor in a movie, “Duo: The True Story of a Gifted Child with Down Syndrome.” And won the Best Film Award at the Academy Awards in the Student Category.

In 1987 Judith Scott was introduced to Fiber Art and became famous for her sculptures. She was the first artist with Down syndrome whose art was featured in galleries, many galleries.

In 1994, Jason Kingsley and Mitchell Levitz published the first autobiographical book by adults with Down syndrome, “Count Us In.”

In 1989, Chris Burke became the first major character with Down syndrome on a prime time television show.

They say when you break a glass ceiling you will get slivers. There are critics of “Born This Way” and viral videos featuring people with Down syndrome. Vocal parents of children with Down syndrome who point out that those who are featured in the media don’t represent everyone with Down syndrome. And while each cast member has worked very hard to achieve their success, nothing came easy for any of them, and these critics take away all their hard work by sweeping it under the carpet and assuming their lives have been effortless.

None of these people “lucked into” their firsts. For many years before their “first,” they worked hard. Their families exposed them to their communities and encouraged them to follow their dreams. And their parents facilitated those dreams by showing them the steps they needed to take to succeed and helped them prepare for the opportunities.

Yes — there’s a couple of babies in this group — but they also didn’t luck into their firsts.

Asher’s mom had to advocate when the modeling agency representing him didn’t even submit him for the OshKosh advertisement. But OshKosh couldn’t resist him after seeing how adorable and what a huge personality he has.

For all these people, their parents believed in them. Their parents never gave up when things were difficult, when behaviors reared their ugly heads and when people used that four-letter-word: can’t. They all said, “I’ll show you!” And they did.

What barriers are left to be broken down? I know Sean aspires to be the first person with Down syndrome on the Ellen Show… but there are still so many more firsts to achieve.

If I missed any firsts, my apologies, please post them in the comments.

About the Author: Sandra McElwee is the author of three books, and the Chief Dream Facilitator for her son Sean who is a cast member of “Born this Way,” T-shirt designer (seanese.com), trampoline park referee and a keynote speaker.

Sandra Assimotos McElwee is an advocate for unborn babies with Down syndrome and created one of the first websites for parents with a prenatal diagnosis. Author of three books written about her son Sean, “Who’s the Slow Learner? A Chronicle of Inclusion and Exclusion,” “Who’s the Slow Learner? Adventures in Independence,” and “My Name is Sean and I have Something to Share.” She also contributed to, “Gifts: Mothers Reflect on How Children with Down Syndrome Enrich Our Lives.” Married over 25 years to Sean’s father, Rick, they enjoy traveling and participating in Sean’s sports activities. Sandra is Sean’s employee in his business, her title, “Chief Dream Facilitator.” Also a medical sales professional her most important job is being Sean’s mother.