The 'Spidey Sense' My Generalized Anxiety Disorder Gives Me

I already had an inkling I was an anxious person, I always had a problem with worrying too much or being too caught up with the worst case scenario. But when I read the words “generalized anxiety disorder (GAD)” after feeling all kinds of awful for months, it gave me a bit of relief. It felt great to know what was happening in my head as well as my body. I finally had an explanation for my racing thoughts, my stomach pains, bodily tension, my hand tremors and my constant sadness. I thought for a while I was going truly “insane.” It was honestly like I was becoming Ophelia from “Hamlet.” While having this explanation was a relief, it didn’t dissipate the moderate level of GAD I felt. It only made the beast calm itself for a while knowing it had been made known.

This was a gigantic monster even worse than any monster I was afraid of in childhood. It was not a monster that was imaginary or even irrational, it felt like a real monster that lives in me like a parasite. It manifests itself in my personality and makes me look unrecognizable to anyone who knows and loves me. It’s like being locked up in my own head and being forced to watch an imposter control me while all I can do is watch. This didn’t stop this monster from attacking things in my life I prized. It attacked my already low self-esteem, pushing me down further and aggravating my depression by putting me in a constant feeling of nothingness and sadness. It also attacked my friends and hurt them which, in turn, hurt me. It also attacked my school performance which made me work less and made me want to participate in life less. It wasn’t until I started taking anxiety medication and made some necessary lifestyle changes –eating better, getting off of social media and practicing mindfulness, just to name a few — that I started to feel better.

Another thing that helped is the internship I work for. It involves giving people information and referring them to services in the community. The thing that helps me the most involves doing input of alerts into the system I work in. I read the presenting diagnoses and the reason for the alert and sometimes it helps me to feel better when I feel the weight of my own problems crushing on me. Putting the world into perspective when I get caught up helps me realize I’m doing better than I think I am.

The strength of my anxiety monster could grow or shrink depending on the day or even my mood. Lately it has been less than before and this is great, but I know something will set it off. I tend to judge how bad my anxiety is by how bad my hands are shaking and most days they are shaking lightly and I know I am at an “OK” level. Then there are days when my anxiety is so high that my whole body is shaking. I try not to give in and fight it and there are days where I win as well as days when I lose. I may sometimes lose the battles, but I’ll win the war. But for now, my “spidey senses” will alert me to both the existent and nonexistent danger around. 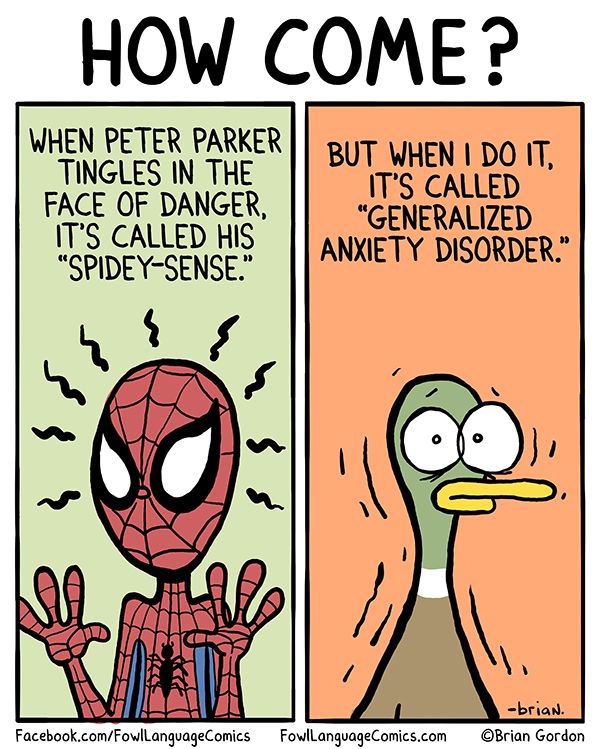 Photo via Spiderman Facebook page and comic via Brian Gordon.

Someone who deals with mental illness and at the same time trying to figure out who she is. I write my experience and hope someone finds a part of themselves in my story or appreciates my journey.