What It Was Like to Travel Abroad While Chronically Ill

I arrived at the airport with a bag full of medications, liquids, and needles. I
was making my annual trip to Tel Aviv to escape the New York City winter—that
part was normal. Being weighed down by so much medical equipment was not. I
asked the Delta representative if she wanted to see the doctor’s note that I
had been given, which would allow me to travel with my stockpile of supplies.

“Oh, you mean for like, diabetes? No. You can show it to the TSA agent at security.” She took my checked bag, and I paid the $200 fee for it being overweight. Then I headed to security, where I was sure that I would have to explain myself.

I don’t have diabetes, as the airline representative assumed. I have a rare immune deficiency I’ve been managing for my entire life. As a patient, I took pride in my ability to maintain a fairly normal lifestyle. Like so many others with chronic illnesses, I didn’t have to be hooked up to machines or manage a treatment regimen that significantly interfered with my life. I’d had a taste of that in 2013, when I was sent home from a brief hospital stay with a PICC line, and had to administer IV drugs three times a day. Those four days were grueling, and I had no desire to relive them. Luckily, I eventually found two different oral medications that treated my symptoms, and I was on them for five years without any problems.

But last year, I started having side effects. One medication started to cause elevated liver enzymes and the other medication stopped working. From a health standpoint, being on these types of medications was non-negotiable. We had to find a solution. My doctors suggested a new drug administered through a nebulizer. I was not happy to hear this.

When I was in the hospital in December, a nurse practitioner taught me how to do the full nebulizer treatment. Wipe down the bottles with an alcohol pad. Use a syringe to transfer the sterile water into the bottle with the powdered medication. Roll the bottle in my hands to mix it up. Use the syringe again to pull 4cc out and into the nebulizer. Turn the compressor on. Put the mouthpiece in my mouth and breathe normally. This process allowed the medication to reach my lungs.

The nurse practitioner seemed to think I took to the process quickly.

“You’re better than most of my patients,” she said.

I didn’t take that as a compliment. I didn’t want to become an expert. I hated
the fact that I had to work with needles every day. I didn’t want to believe that this was going to be part of my everyday life—the life I tried so hard to make “normal.”

But there was no way around it. I had to use the nebulizer for 30+ minutes a day,
twice a day. I thought finding time to meditate for 20 minutes twice a day was hard. The doctors told me the new drug was temporary, so I was willing to try.

Which led me to the airport, where I was practically begging every official-looking person to look at my doctor’s note. The note explained why my entire carry-on bag was filled with 50+ glass bottles of a cocaine-like looking substance.

I flagged down the grumpy TSA agent.

“Do you want to see my doctor’s note?” I asked.

“No,” he said, I didn’t need to show him either. I felt like I had just turned 21 and wanted to get carded at the bar.

My bag went through the scanner as I went through the metal detector, and they were put aside to be reviewed. The grumpy TSA agent came over with my bags, unzipped them, moved things around and handed them back to me. There were no words exchanged. I zipped my bag back up and felt a bit of relief knowing they didn’t think I was smuggling cocaine to Israel. Why did I care so much what they thought? I just didn’t want them to take it away from me. As much as I hated being tied to them, I knew it was imperative for my health to continue taking the drug.

There was one more piece of the puzzle: the compressor. The compressor is the machine that gets hooked up to the nebulizer mouthpiece. In the weeks before my trip, I had researched whether the compressor would work in Israel. Something about voltage? No, is it wattage? I failed Algebra 1, twice. Numbers were never my specialty. With the brief research I did, it seemed any convertor would make it work. But, I had no way of knowing if that was really true until I touched down in Tel Aviv. Feeling relief that check-in process was over, I boarded the plane.

When I arrived at my apartment in Tel Aviv, I put all the equipment on the wood dining table to do my evening treatment. I plugged the compressor into the convertor and then into the wall. It wouldn’t turn on.

I walked around the apartment trying different outlets. Right of the bathroom sink, left of the bed, right of the oven, behind the couch. It still wouldn’t turn on.

Now, I was frustrated. In the back of my mind, I had expected a hitch like this. But
that was why I had done so much research. I had really thought it would work.

I walked across the street to Super-Pharm, crossing my fingers that they carried
compressors. Without the compressor, I couldn’t do the treatment.

I went to the back of the store to the pharmacy and asked the attractive guy around my age if they
sold them. He took three steps behind him, and picked up a box.

The picture on the box had an egg-shaped, bulging eyed children’s character that resembled a
penguin.

“Is this for your child with asthma?”

I think he felt bad for me because he offered me a discount. I handed him my credit card, he bagged the box up and I walked home. I’m not someone who prays,but I certainly did some sort of “please god” type thing as I hiked up the three flights of stairs hoping it would work.

I sat down at the dining table, again, took out the penguin and plugged in the
cord. Please work. Buzz. The loud noise of the compressor filled the living room. I let out a sigh of relief.

I sent a photo of him to my best friend in New York and she decided his name was Norman. Norman the Nebulizer. It fit. 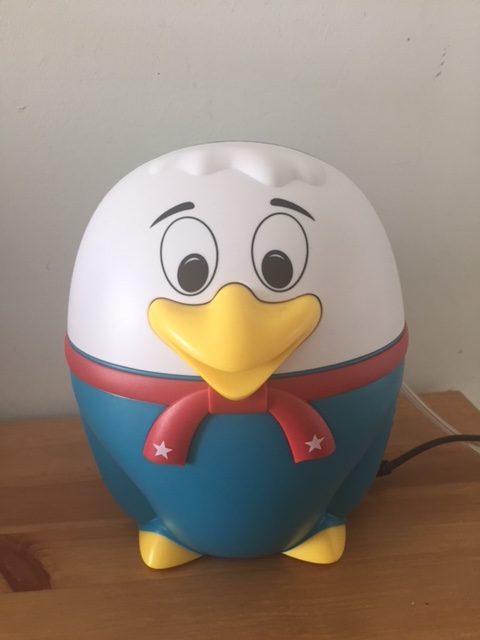 And to my surprise, despite never wanting to use a nebulizer in the first place, something about Norman brought a slight smile to my face. Whenever it was time to put him to work, I focused less on how annoying the whole process was.

During my seven weeks in Tel Aviv, I occasionally considered whether Norman would make the trip home with me. My regular compressor would work fine at home, but I’d grown a little bit attached to Norman and his goofy face.

When it came time to pack my things, I decided to leave Norman behind. So many of my friends in Tel Aviv have kids, and I figured one of them could use him. I was hopeful that when I returned to New York, I wouldn’t have to use a nebulizer every day. Even if that didn’t turn out to be true, I wanted to hope for the best.

Harper Spero is a business coach and consultant who specializes in working with individuals who want to live, work, and earn on their own terms. As someone who has managed an invisible illness for her entire life, she works with clients to find work-life balance, prioritize self-care, and discover the freedom that comes with entrepreneurship. This year, she launched the podcast Made Visible to help people with invisible illnesses (and those who care for them) feel more seen and heard.