If You Can Relate to These 'Faces of Cognitive Distortions,' You're Not Alone

In 2019, I created the series “The Faces of ADHD” as a way to depict common ADHD coping mechanisms and masking behaviors. As it gained popularity, I realized that creating characters was a useful way to represent different mental health concepts. While on my honeymoon in Italy, I felt inspired to make a new series; I ended up sketching all 16 of the characters on the charter bus between destinations.

My intent for “The Faces of Cognitive Distortions“ was to teach others about the different types of “thinking traps” and help them identify the ones they fall into most often. Many people (myself included) are visual learners, so having a memorable set of characters may help them remember cognitive distortions in the future. 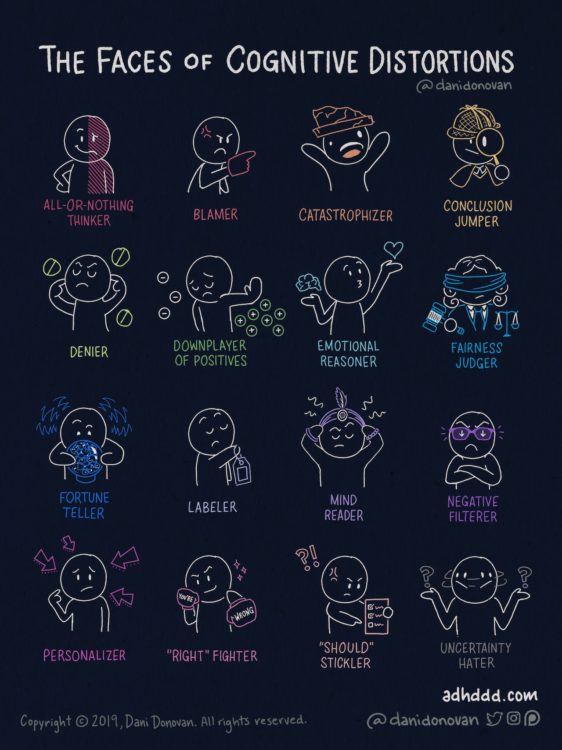 What are cognitive distortions? They’re automatic thought patterns that occur when we convince ourselves that something (usually negative) is true… when often it isn’t. They typically happen during an upsetting event or experience and warp reality by reinforcing negative beliefs.

Here’s a real-life example: While you’re giving a presentation at work, you notice two coworkers whispering and giggling. You get a sinking feeling in your gut, convinced that they’re making fun of you.

Previous negative experiences (and subsequent cognitive biases) can lead us to believe we know things are true without evidence.

I’d like readers to know that these cognitive distortions are common, and happen to everyone from time to time. When they start becoming a recurring part of your daily life, or are causing chronic anxiety and lead to ruminating thoughts… that’s when it may be time to take action. Cognitive behavioral therapy (CBT) aims to help people recognize their patterns of thinking so they can learn to problem-solve, change their feelings and better regulate their emotions. If CBT is not an affordable option, many studies have found self-directed CBT can be very effective as well.

My hope is that these educational CBT cartoons can be used as a tool to help people recognize negative thought patterns, reframe and reduce anxiety, and gain a better understanding of how their brains work.

Below you can find each face in “The Faces of Cognitive Distortions” series. Which ones do you relate to? 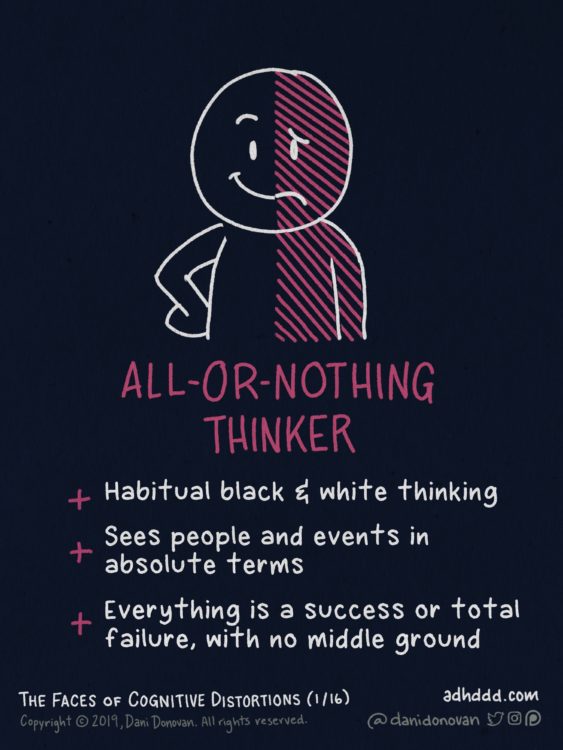 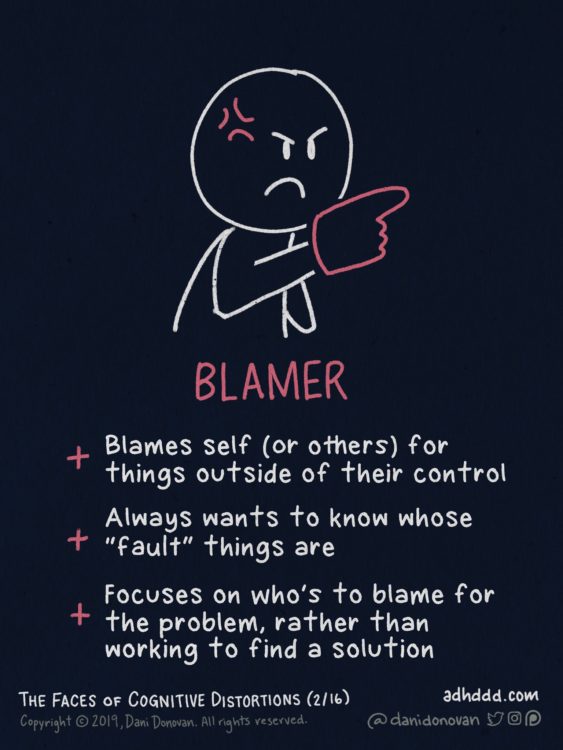 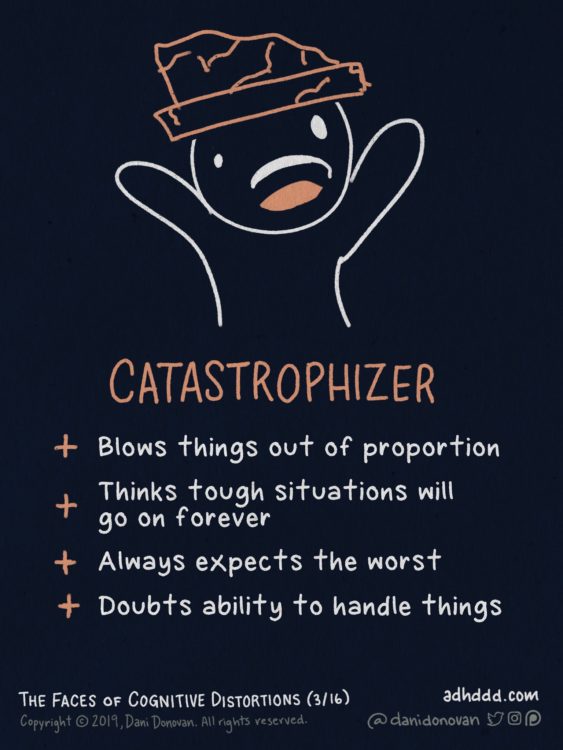 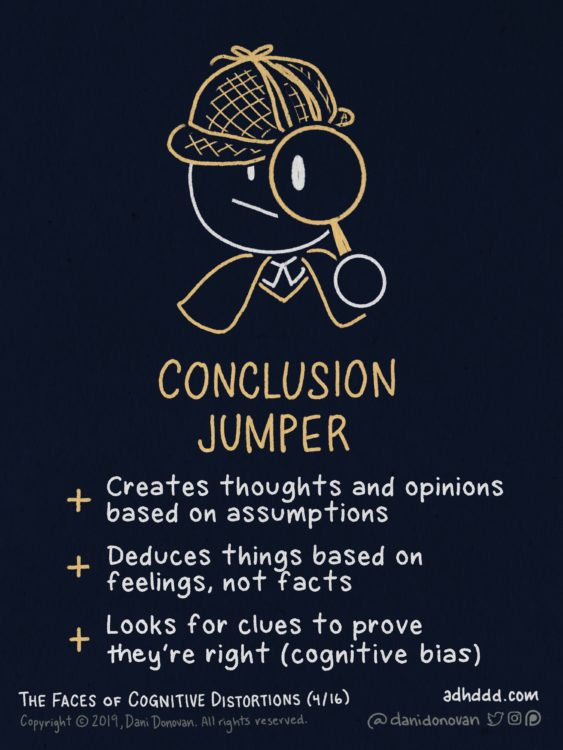 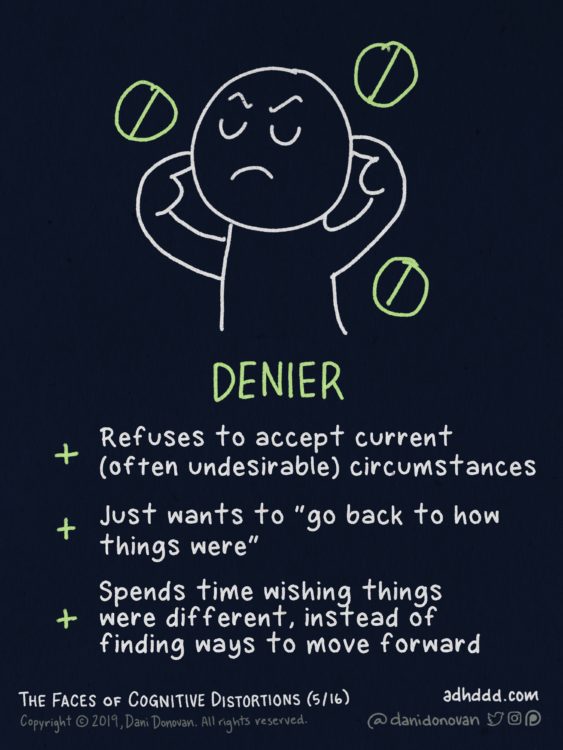 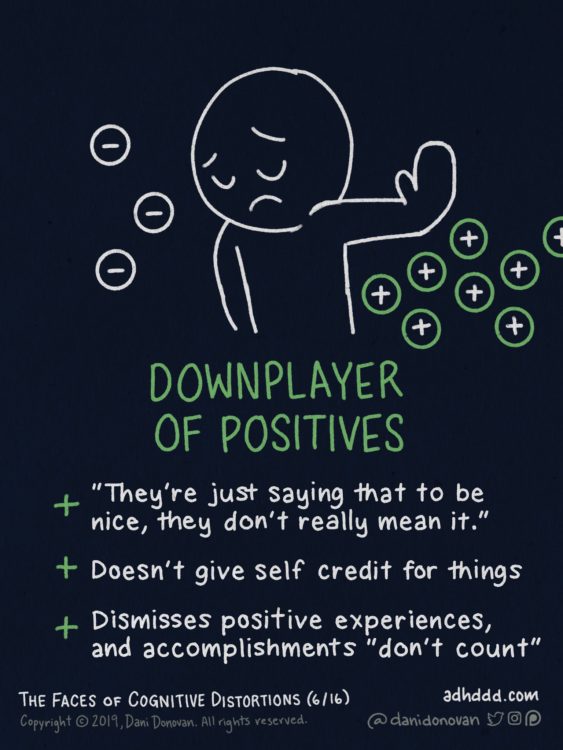 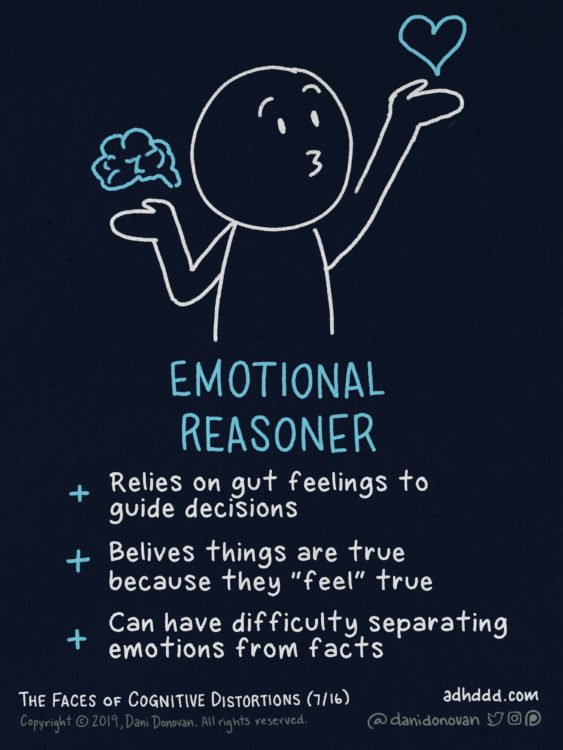 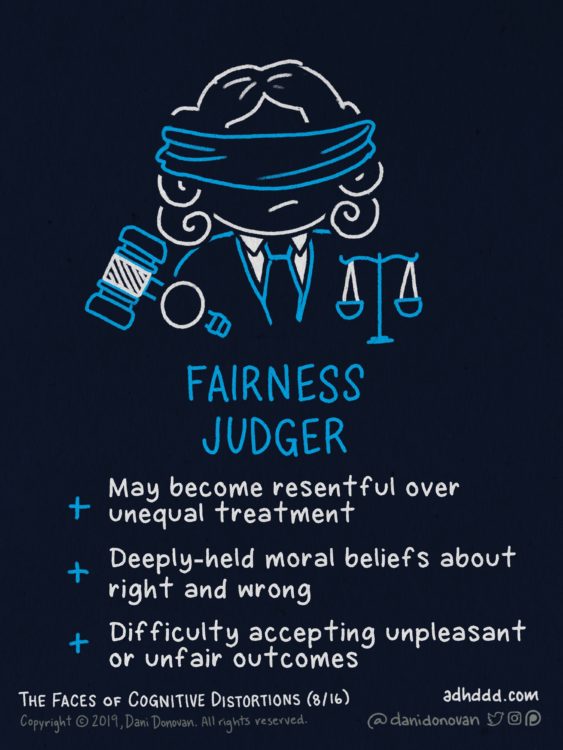 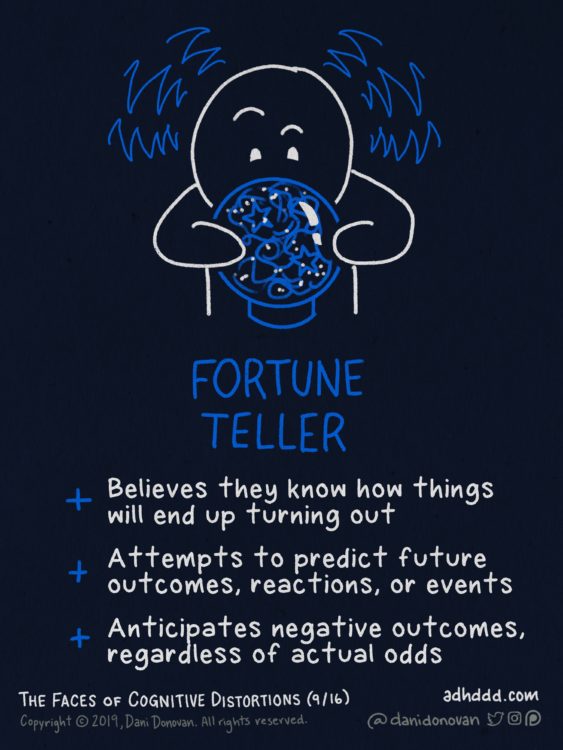 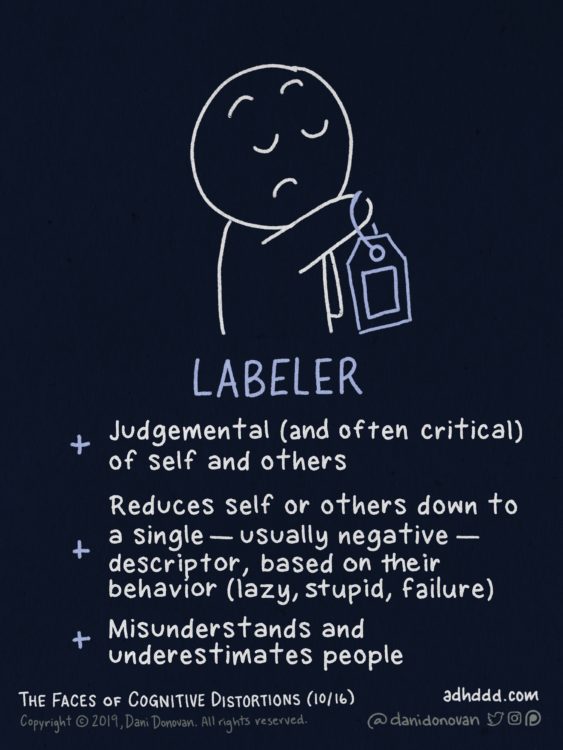 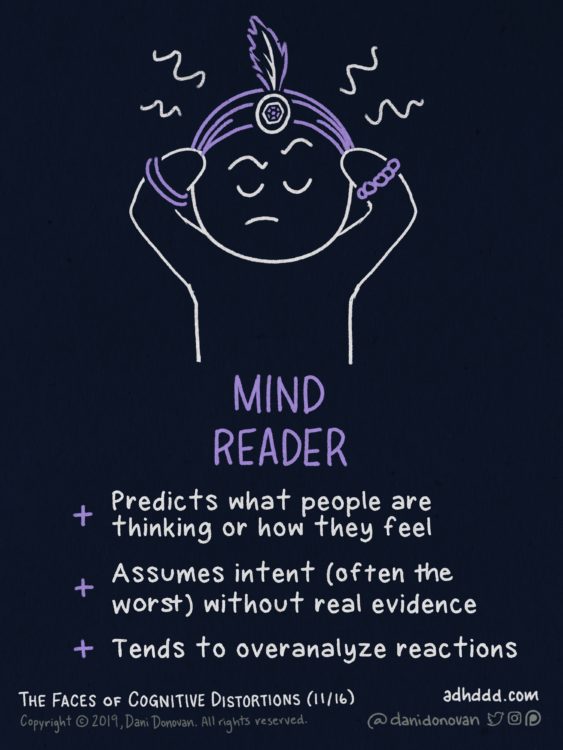 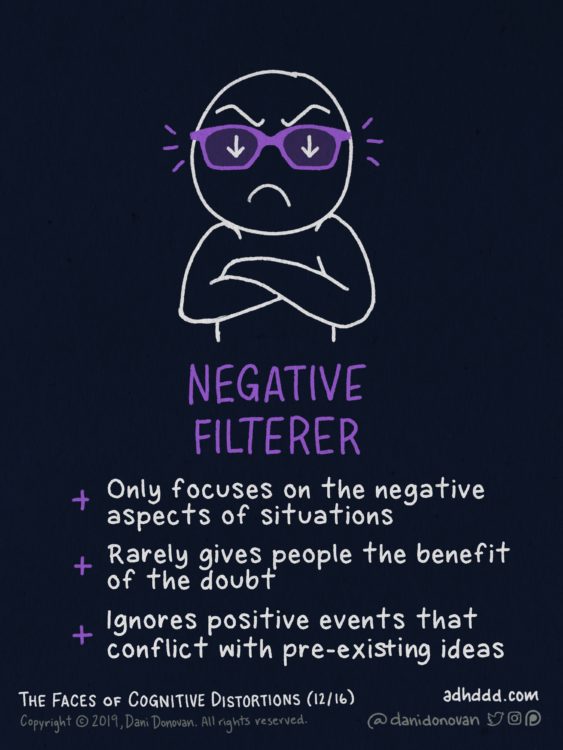 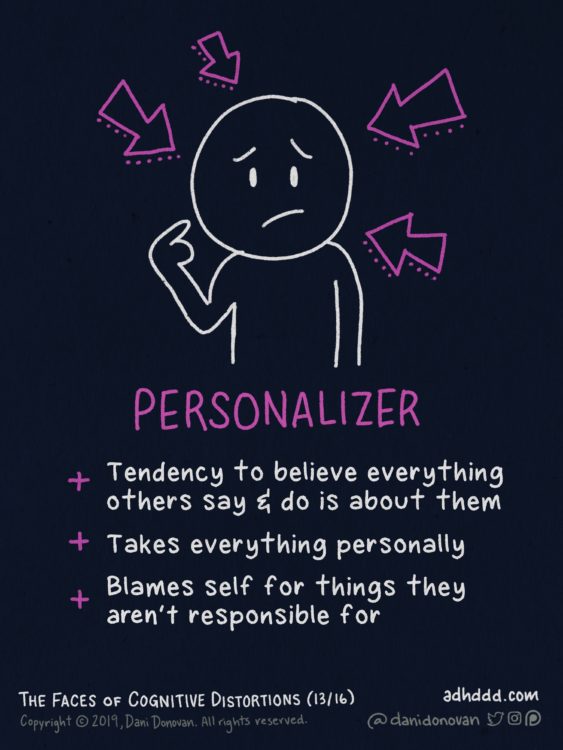 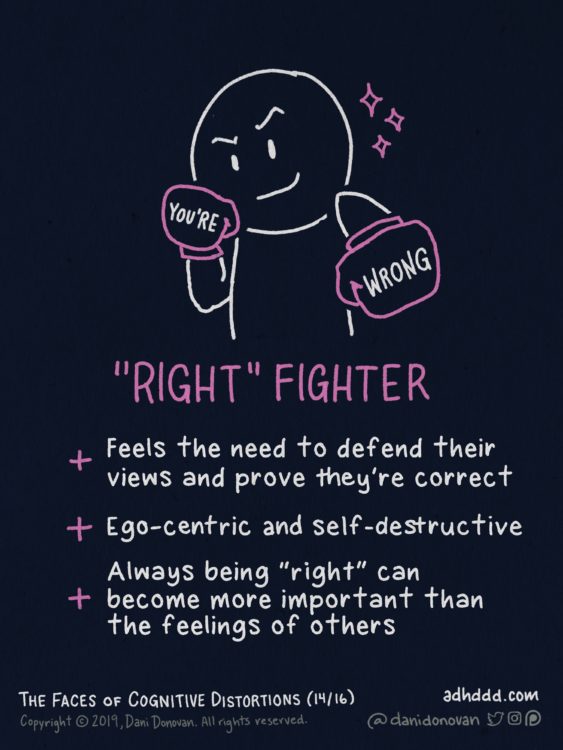 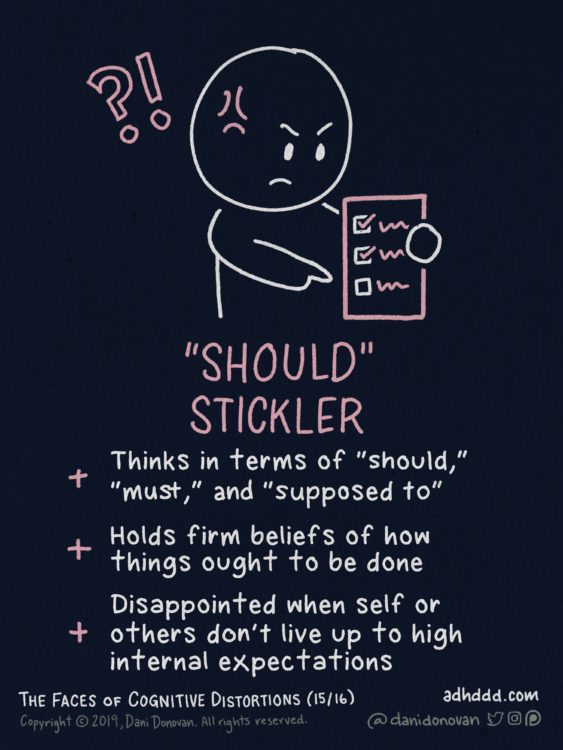 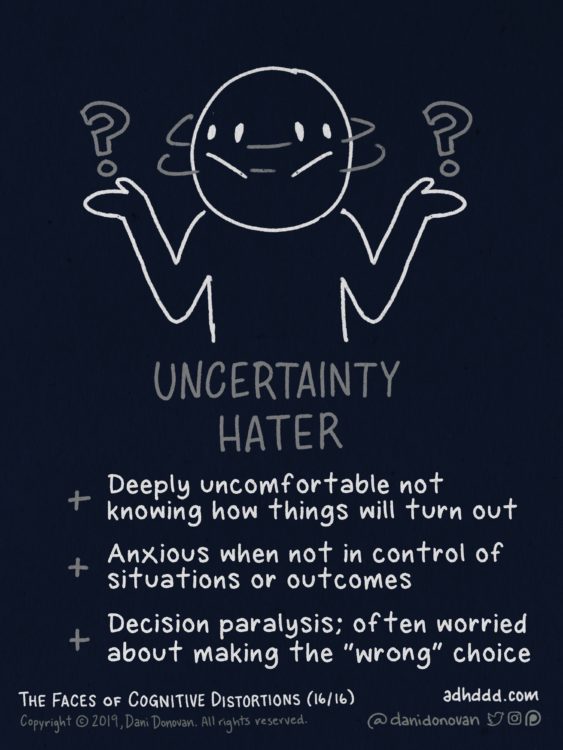 Which faces do you relate to? Let us know in the comments below.

Dani Donovan is a purpose-driven designer, illustrator, social media influencer, public speaker, and mental health advocate who creates viral ADHD comics and TikTok videos. Her first ADHD infographic, “ADHD Storytelling,” went viral within hours and amassed over 100 million views. Her mental health comics have been reposted by celebrities like Mindy Kaling and featured in publications such as BBC and Forbes. In a few short months, Dani’s relatable content and her popular #NeurodiverseSquad hashtag helped her quickly become a prominent voice in the online mental health community. Her influence and original content has helped several hundred people seek diagnosis and treatment for ADHD. Dani has spoken at conferences such as BlogHer and the 2019 Annual International Conference on ADHD, and was the featured speaker for Adobe's Inclusive Design series on Global Accessibility Awareness Day. She lives in Omaha, Nebraska and recently left her job to create mental health content full-time. You can support her work at patreon.com/danidonovan, visit her online shop at ADHDDD.com, or view her work on Twitter, TikTok, and Instagram.

Save
Conversations 27
We use cookies and related technologies to help identify you and your devices, enhance your experience and conduct advertising and analysis. By choosing "Accept", or by using this site, you are agreeing to our use of cookies. You can read more about how The Mighty uses cookies in our Cookie Notice.
Manage Choices
Accept