When I got hospitalized in 2018, I remember I left my job around that time, earlier that year. And I was in a really deep depression. I already had multiple attempts, but I never went to the hospital because I hid a lot of my attempts. I was struggling to find another job and my parents at the time were being very overbearing. I felt unworthy. How will I ever be independent and live independently? There was a lot going on mentally.

My boyfriend now was actually my friend in 2018. He was the one who offered to take me to the hospital. He was just like, “You should go to the hospital.” I was like, “No, no, no, don’t take me there! My parents are going to be mad, they’re probably going to disown me, I don’t want to get hurt over there, I heard it was really bad.” And he was like, “No it will be fine. It will be fine.”

The emergency room I went to was pretty much empty and quiet, which is really weird for me. When I got there they took me in and they pretty much told me we don’t have a mental ward here, so you have to wait for an ambulance transfer. I had to wait in a room for two hours.

I was transferred to a county mental hospital. My experience at county was somewhat correlated to what I thought a mental hospital would be like. First of all, there weren’t really any beds. You know those hospital chairs that recline? That’s where everybody slept. It was not inviting at all or comfortable.

And they only had two big rooms and one room was all the males and another room was for all the females. And they also had a couple of solitary confinement rooms and those actually had beds in them, but people would get handcuffed to those beds. They only had one shower there and there weren’t any activities. It looked like not everyone got to shower.

There was a range of people who were there. There were people who were chronically suicidal or in the middle of mania, and there were people who had very high psychosis and were thrown into solitary confinement. This all happened in this one room. It was very overwhelming and uncomfortable. I don’t think I went to the bathroom at all and I stayed the night there. I was scared to move around and do anything. I held my bladder and didn’t take a shower. So I just stayed there in my stank scrubs. And even the meals were horrible. It was kind of like the leftovers from the hospital cafeteria.

It took forever for the doctors to get to you because I think [the mental hospital] was more of a transfer point for people. So I guess everybody that has a mental health crisis gets thrown there and the doctors and social workers and nurses that are there try to match that patient with a different mental hospital. Of course, it’s all depending on your insurance.

I do want to acknowledge my privilege for two things: One privilege is that I had insurance and my second privilege is that when my parents came to visit me there, my mom actually knew one of the social workers personally. She was able to get me into a better mental hospital that was a private nonprofit. And that was a whole different experience.

I actually had a room. I shared it with someone, but there was a bed and a bathroom for us. The room though was kind of like if I was on a road trip and I needed a place to sleep. You stay for a night but you leave type of thing. And they had an activity room and the lunches catered to everybody’s allergies.

In terms of the staff that was there, they weren’t super diverse. It was predominately white. But the therapist I had was a Black guy. So I would definitely say that mental hospitals need to diversify their staff. Honestly, getting paired with a Black therapist helped me feel not as ashamed to be there. Working with somebody who looks like me, I was able to feel comfortable and actually share what was going on with me in an open way and not feel like I need to pull things back. If you can, I would suggest asking for either a doctor or a therapist if they have any Black staff and if you can get assigned to them.

Black people in mental hospitals also definitely need sleeping caps, period. I remember my skin was so dry and chapped and it was bothering me. And so I asked them if there are any lotion. And they were like, “We have vaseline and this kind of lotion.” I was looking at this stuff thinking this lotion is literally just water and mineral oil. I asked, “Do you guys have a comb?” They’re like, “Yeah!” But of course, it was those small pick combs. It wasn’t like a wide tooth. I can’t do anything with this.

Besides that though, I would say the nonprofit hospital helped. Of course, for me as a person with borderline personality disorder (BPD), the nonprofit hospital was a place where I’m like, I don’t want to leave because everything is taken care of for me. I can just be and have no worries. No stresses about bills or school. I’m in my element. But they saw I was getting too well so that’s when they were like, you gotta go. [laughs]

My last advice to Black people who may go to a mental hospital is to be gentle with yourself the whole time you’re there because if you’re not, you’re going to miss out on a lot of learning opportunities to help you grow for when you leave. 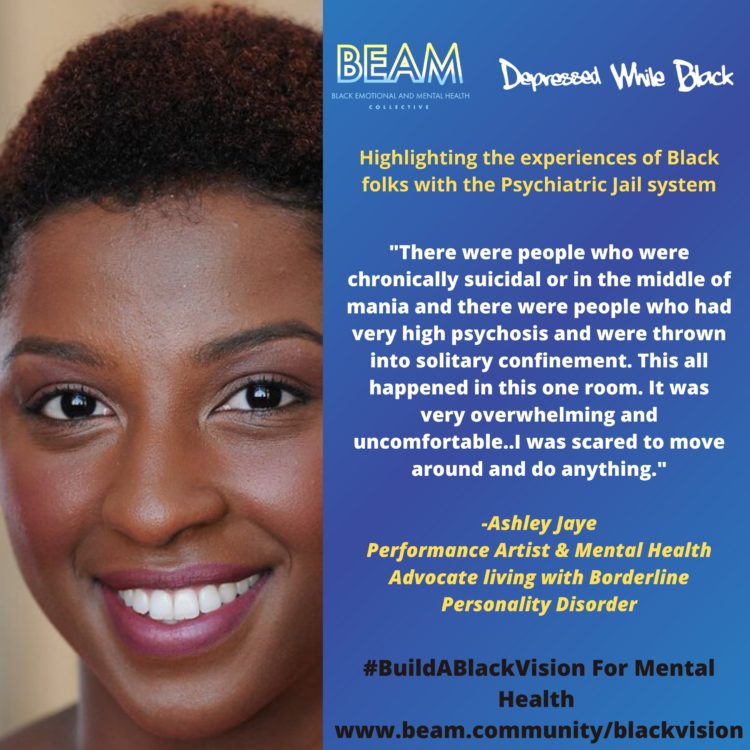 Photo by Leighann Blackwood on Unsplash

Ashley Jaye is a solo performer/actress, mental health advocate, and sloth lover diagnosed with Borderline Personality Disorder (BPD) and Depression. She has created 3 self-written solo performances called A Spike Lee Joint, Dee Pearson is (More Than) a Bully, and Who Wants to be Neurotypical? (F.K.A. Channel BPD) respectively. Her solo performances hilariously and honestly highlight the complex racial, sexual, societal, and cultural intersections of mental illness for Black Women, topics she never imagined herself speaking about.