The Marinara Mishap: A Tribute to Dads of Medically Complex Children

In anticipation of Father’s Day, I bring you a tale of fatherhood.

In the summer of 2014, I was in such a haze. Our son, L, was just over a year old, and we had recently been able to get rid of his central line, so things were great, right? Right. Everything was fine. L was line-free, and things were good, and I insisted everything was fine instead of taking a hard look at how quickly his health was plummeting.

Our days were fine, more or less, if you put aside the increasing resistance to eating and the rather alarming weight loss. Which I did, of course, because we were line-free! So things were fine.

But we hadn’t slept in weeks. L wouldn’t sleep unless one of us was holding him, and he wouldn’t allow us to hold him unless we were sitting up, so in between cleaning up after and trying to calm his nighttime screaming, we tag-teamed sitting in the glider holding him while he slept. All night. Every night.

One night I asked my husband, Z, to bring me a bottle of milk. L was particularly inconsolable, and while we had to be cautious about the volume of his intake, drinking something often helped.

Now, Z is not exactly good at functioning on little sleep. But he was putting up a valiant effort that summer. So after the third or fourth time I asked him over the monitor to grab a bottle of milk from the fridge, my words finally broke through his sleep fog, and he dragged himself out of bed, sleep-walked down the stairs and into the kitchen and brought me the bottle of the insta-baby-calm I had requested.

Only this time, something was off. Usually L would calm right down and drink his milk, but on that night, he would suck for a split second, then grow increasingly hysterical each time I tried to push the nipple back into his mouth.

Then I smelled something. I sniffed. It wasn’t poop… it was… oregano?!

Not many things made complete sense in the exhausted haze of that summer, but through the swirling vortex of never-ending middle-of-the-night, I tried to sort out whether L had developed some new and alarming condition causing a basil odor. Herborrhoids, perhaps? Fennel Fissures? Dillverticulitis?

Then I felt something drip off the bottle onto my finger. I did what any reasonable, self-respecting mother would do in the middle of the night in the dark: I licked it.

Now, let me pause here to detail exactly what bringing me that bottle of pasta sauce entailed. It was not just sauce from a jar that Z had sleep-grabbed and poured instead of milk. No, the only pasta sauce we had in the house was some homemade marinara my mom had brought us. It was stored in a 2-quart square vat without a pour spout. So to bring me this bottle of sauce, Z had to pry off a large green square lid, heft a heavy square vat with both hands and aim the sauce into a bottle with a mouth that’s maybe an inch and a half wide, tops. He then neatly screwed a nipple on top, replaced the green lid, put the vat of sauce back in the fridge, brought the bottle to me and fell back into bed — then was thoroughly put out when I yelled for him to bring me a second bottle that was actually milk, because he had just brought me one, goshdarnit!

As you can imagine, we descended into quite a scene once daylight broke: sauce on the counters, sauce on the floors, sauce tracked up the stairs, sauce on the glider, sauce on our sheets. I believe Z still had sauce on his feet when he awoke. To this day, neither of us can fathom what possessed him to pour marinara instead of milk. To this day, L will not eat pasta with red sauce.

There are an awful lot of patronizing stories out there about bumbling dads who try very hard but despite their best efforts just can’t figure out which end of the baby the diaper goes on. The stories we hear about dads, and even the very language we use to talk about parenting, all too often assumes well-intentioned incompetence. 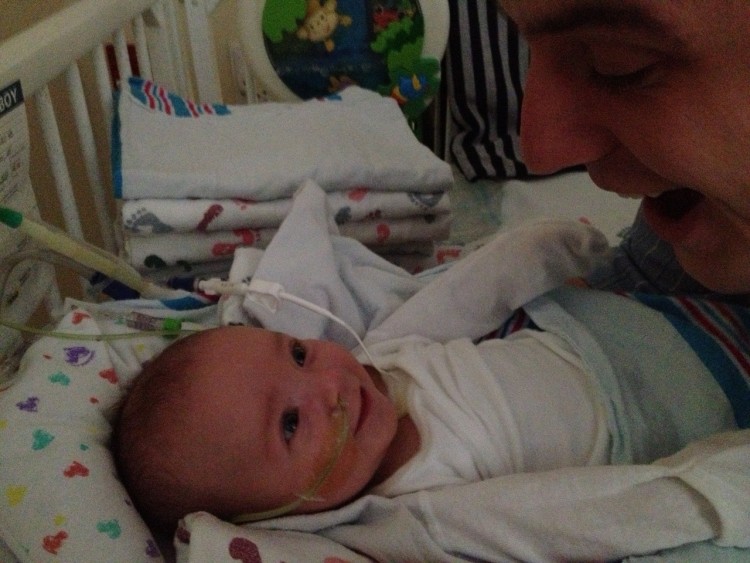 This is not one of those stories. This is the story of a dad who is more capable than he ever ought to have to be, who for awhile could change a mean ostomy bag, who spends his evenings prepping a sterile field and assembling TPN, who is the best at tossing L onto the bed upside down from much further away than he really ought to, and who also occasionally gets fed up and needs a break and wishes this would all go away and yes, sometimes, when he’s overworked and overstressed and overtired, pours marinara instead of milk.

Here’s to all the medical dads out there who have been plunged into a role they never could have imagined and have risen to the occasion with only occasional middle-of-the-night marinara incidents, who often go unseen or unrecognized in a world that loves to focus on adorable babies and their mothers. To the dads who spend long hours at work while their hearts are at home or in the hospital, to the dads who often bear the brunt of their trauma silently so their partners can have room to be weak; to the dads who have cried at diagnoses, who have learned skilled nursing alongside nursery rhymes, who have had their expectations for fatherhood changed but learned nothing can shatter the bond between father and child; to my husband — happy Father’s Day.

A version of this post first appeared on This Gutsy Life.

The Mighty is asking the following: What’s one thing you want to make sure the special needs dad in your life knows? Check out our Submit a Story page for more about our submission guidelines.

Amy Thompson is the mom to Lucas, who started life as a 34-weeker with gastroschisis and is now a fire-truck-obsessed toddler with short bowel syndrome and an affinity for Neil Diamond. She loves dark chocolate, wine, yoga pants and the online friends who have helped her find her voice.