What It's Like to Be Diagnosed With RA After College Graduation

I never expected the summer after college graduation to be easy. After a relentless semester of job rejection after job rejection, I graduated without a clue about my next steps, so off I went to spend the month dog-sitting in my hometown in New Jersey. The days quickly felt long and lonely. So, I did what any financially responsible graduate would do, and spent my first dog-sitting paycheck on a monthly yoga pass, eager to alleviate some post-graduate anxiety.

I had just finally resolved a seemingly endless bout of foot pain, and was relieved to be walking effortlessly again. Each day, I walked 2o minutes each way to the nearby yoga studio, where I was happily surrounded by strangers twice my age. On day six, however, I began to feel an ever-so-slight pain in my knee. I was frustrated about dealing with yet another unexplained injury, but a quick Google search reassured me that rest and ice would be enough to do the trick. Unfortunately, as it turned out, this could not have been further from the case.

When my knee pain lingered for weeks on end, gradually growing less and less bearable, I finally bit the bullet and scheduled an orthopedist appointment. Just a few short days later, I was scheduled for a job interview in Washington D.C., followed by a flight to my parent’s house in Amsterdam, the Netherlands, which did not leave much time for medical emergencies. Unfortunately, this was precisely the time at which everything began to fall apart.

Suddenly, a short five-minute walk up the hill from the train station left me in hysterical tears, as did, oftentimes, a trip up or down the stairs. It took all of my strength to get off the couch or out of my chair to feed the dogs. I finally bit the bullet and took a trip to the orthopedist, who left a voicemail a few days later informing me, to my surprise, that I had Lyme disease. When I called my mom to inform her of my new diagnosis, she decided it was time for her to fly over to the U.S. I was still dog-sitting by myself at this time, although I had to call in some reinforcements when it became clear that walking was no longer a possibility. At this point, standing up to wash a few dishes was nearly impossible. If I did manage to do so, I would have to follow it up with a lot of ice, pain medication, and most likely, a nap.

These details about the level of pain I felt may seem excessive. Unless you have experienced physical pain of this kind, you will never understand the feeling of needing to explain or justify it to those around you. Although it may seem obvious, you cannot see pain on a person’s face.

My mom and I went to see an infectious disease doctor, who we hoped would give us a bit more information about my diagnosis, when I had contracted it, and how long the recovery process might take. Looking back, I realize that he never really looked at my knees, asked questions about my levels of pain of fatigue, or offered any words of support. But, at the time, I did not seem to notice. Doctors, we assume, are there to give us answers. How was I supposed to know to ask the right questions?

After another blood test, we were out the door and en route to my grandma’s house, where we would await my recovery. By this point, I felt like all of my friends lives were on fast forward, while mine was firmly at rewind. Slowly but surely, my friends were entering new stages of their lives – new jobs, new apartments, and new relationships… and I felt stuck.

My mom and I occupied ourselves with endless episodes of “Jane the Virgin” and a lot of our favorite foods. Many incredible friends and family members checked in with me regularly, but it was hard not to feel as though others forgot about me altogether, or simply did not understand. These few weeks may have flown by for some of them, who were busy working at new jobs or living in new cities, but when it sometimes hurts your hands and wrists to even turn the pages of a book, time can feel as if it is stuck in slow motion.

At times, I felt extremely grateful for the opportunity to slow down. I still do. I began to cherish the days with my mom and dread the day when she would return to living across the ocean from me. I wondered if I had rushed into the job application process, without taking enough time to truly think about what I wanted next. Most of the time, though, I desperately wished time would speed up. Day after day, I awaited any sort of change, but the pain continued to persist, and even worsen. I woke up every few hours with pain in my knees, neck, and shoulders, unable to find a comfortable position to sleep. It hurt to lie down, sit, stand up… it hurt to do anything and everything.

I could hardly remember what it felt like to live without pain. When I finally received a job offer, it soon became clear that it would be impossible for me to accept it, given the state of my health and the position’s rapidly approaching start date. I stopped the job application process altogether. I had no way of knowing when I would be capable of starting a new job or moving to a new city. Luckily, I had my mom by my side to make me laugh and lift my spirits, but it wasn’t always easy for her. 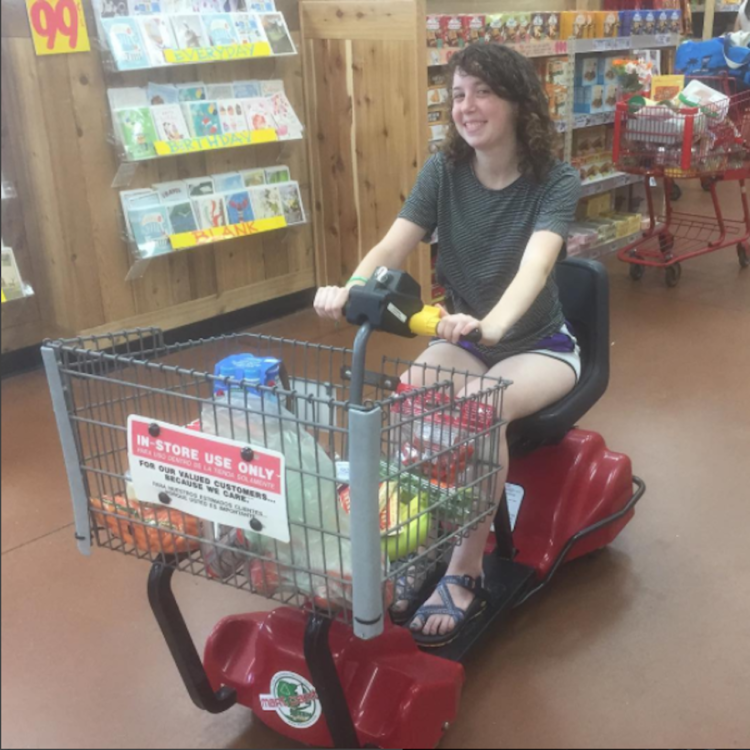 After three weeks passed with no improvement in my health, we scheduled an appointment with a Lyme specialist, hoping for new answers. The new doctor informed us that my previous tests were largely unreliable and outdated. Yet again, I would need a new blood test, which also meant another week of waiting for answers. When I limped back into the office a week later, I felt a sinking feeling in my chest. I recognized the feeling from almost seven years prior, when my orthopedist informed me that I would need spine surgery. Something about the doctor’s face told me everything I needed to know, and I knew immediately that the news would not be good. Yet again, I felt my face flush and my palms began to sweat. I laid back in the chair as she laid out a series of charts. Her words began to blur together.

“Rheumatoid arthritis is a condition in which the body attacks itself,” she said, sketching an explanation about cells on a notepad. “There are professional athletes who live through it, like the golfer Kristy McPherson.”

There was a clear elephant in the room, considering she had yet to attribute my symptoms to this condition, but the message was clear. I had no idea what “rheumatoid arthritis” meant, other than that it was responsible for my summer of misery. Though the doctor never used the term “chronic illness,” I knew enough to understand.

Understandably, she didn’t want to worry me with too many long-term details. Soon enough, though, I realized that I didn’t have much to tell my friends or family members about my diagnosis, because I still didn’t really know anything about it myself.

“Aren’t you too young to have arthritis?”

“So will you have it forever?”

“When will you be better?”

I even heard, “You’ll get through this! You’re strong,” to which I wanted to say, “But sometimes I don’t want to be.”

Unfortunately, that’s the thing about chronic illness. I may never feel completely “better.” Sickness is now a part of my life. Sometimes I feel strong and resilient. Luckily, I have the support of many loved ones who will be there for me even on the days when I feel quite the opposite.

This summer taught me a lot about pain, sickness, health, and all of the in-between. It showed me who would be there for me through all of this. Most importantly, it taught me that we have a long way to go when it comes to understanding pain.

Time and time again, I’ve heard, “We need to start treating mental illness like we treat physical illness.” When we say this, we do a firm disservice to the physically ill. We ignore the ways in which physical and mental health are deeply intertwined. We act like we have a clear grasp on physical illness, pain, and how to support people who battle them on a daily basis. From my experience, at least, that couldn’t be further from the truth.

Rachel Drucker recently graduated from Colgate University with a degree in Educational Studies. Some of her favorite things include r&b, 2 Dope Queens, rhododendrons, and fresh mint tea.