When it comes to facial reconstructive surgery, it’s not like I can just say “please put it all back” if I am unhappy with the result.

When the producer of “Body Bizarre,” the show that shot a segment about me to air later this year, asked me if I’d be willing to do a consultation with a surgeon regarding facial reconstructive surgery, I was reluctant. But curiosity quickly got the better of me.

A little back story: I was born with a benign but fast-growing tumor that threatened my airway. It was deeply embedded, so removing it meant taking out bone, nerve and muscle as well, leaving the left half of my face paralyzed. I had a number of reconstructive and cosmetic surgeries during my youth.

It’s been 29 years since my last facial reconstructive surgery. I quit having them because when I was 21, the one I had went terribly wrong. I woke up in intensive care with a tube down my throat that was holding my airway open so it wouldn’t swell shut. After that horrific experience, I determined that the infinitesimal improvements made by each procedure did not justify the physical and emotional cost. Therefore, I needed to accept my appearance as it was and move on with my life. Over the intervening years, I’ve learned not only to accept but also embrace how I look.

But medical science has advanced and I am always open to discussion, so at the behest of the TV show, the appointment was set up. The producer had done some research, and the surgeon I was to see came highly recommended.

There were six of us in the tiny examining room that day: me, my husband Ian, the surgeon, his associate, their intern and the videographer from the TV show. After some poking and prodding, demonstrations of movement (or lack thereof) in my face and shoulders, and a lot of discussion, the surgeon made his recommendations.

[Paraphrasing] “We would take a muscle from your thigh and transplant it to the left side of your face.”

I was quick to interject. “Well, you’d have to take it from the right thigh because they’ve already taken one from the left thigh. But then at least both sides would match!”

“We’d have to connect it to a working muscle in order to animate it,” he continued, “and since the masseter muscle on that side is missing, we would have to use one in either your neck or shoulder.”

“Um, so what you’re saying is that I’d have to shrug my shoulders to smile?” 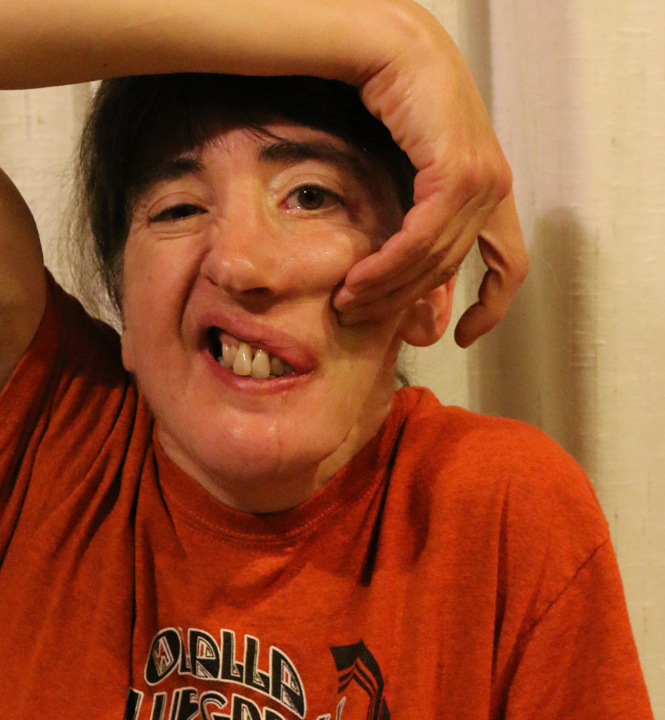 “At first, yes, but by doing exercises and training the muscle over time, most of our patients are able to activate it automatically. They no longer have to consciously shrug — it becomes more involuntary. Here, let me show you what it would look like.”

With that, he positioned me in front of a mirror, stood behind me and gently pulled up the left lip. It made my mouth rounder in its relaxed state, but all I could see was that my front teeth were fully exposed and prominent.

I did not say this aloud, but I thought to myself: So basically there would be a gaping hole in my right thigh, I’d have to shrug my shoulders to smile and I’d look like a woodchuck. 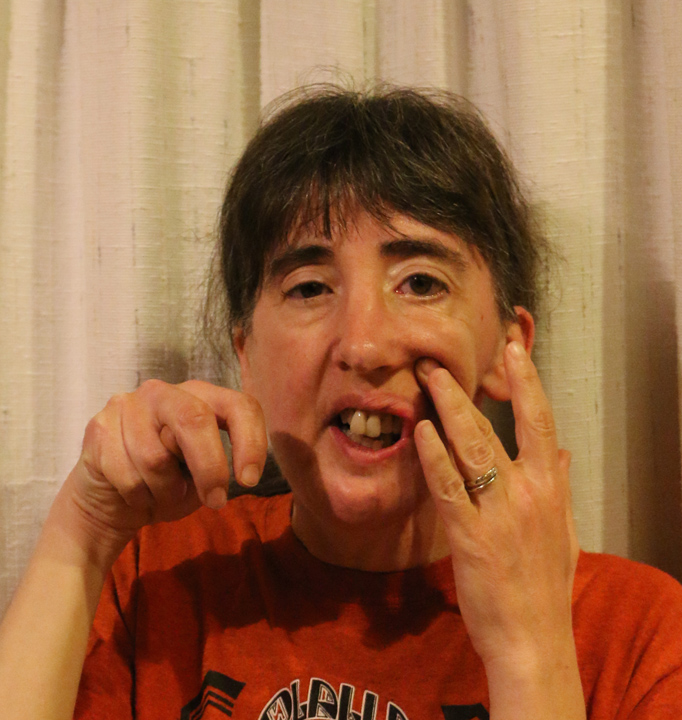 Plus it is a six-hour procedure and would keep me in the hospital for approximately four days. Add to that a significant recovery time with limited ability to take care of my horses, let alone ride.

“I really think it would be a great improvement for you,” the surgeon insisted. “It would not only improve symmetry, but would really improve your speech and your ability to eat.”

My speech is fine… and I really don’t get how it will improve my eating since it won’t add teeth or improve connectivity on the left side.

But that’s just it. The surgeon has the ideology lots of people seem have — that any improvement is better than no improvement. If it can be done, then it should be done, and he sincerely believes he’d be doing great things for me. I’ve had a number of people suggest to me that additional surgery can really “help” me, sometimes even giving me the name of a surgeon I should contact. As stated in my new book, “Facial Shift, Adjusting to an Altered Appearance,” people don’t understand it can take just an infinitesimal amount of asymmetry for it to be noticeable that someone is “different.” The degree of difference matters little.

I’ve opted out of this particular procedure. It’s too invasive, and the outcome too nebulous. Most significantly, the thought of it fills me with dread, not optimism. If I were 16, I might well go for it. In fact, up until the surgery at age 21, I went along with doing surgeries because I understood this was the thing to do. Until the one nearly killed me, I never gave much thought to stopping.

Now, however, as I near age 50, I’m used to this face in the mirror. I don’t want to look in the mirror and not see me, or worse yet, a face that looks worse, not better.

It’s not like I can just say “please put it all back” if I am unhappy with the result.

I am not opposed to the concept of surgery, especially if it can improve something that causes discomfort or fixes something that might cause potential problems in the future. In fact, I have elected to go ahead with the surgeon’s second option, which is a much less extensive procedure. My left eye doesn’t close all the way, so it gets dry and irritated. It tears up, often dripping down my face. While I do not seem to have a problem with eye infections, that is certainly a possibility, increasingly so as I get older.

The surgeon will take a tendon from my wrist and use that to pull up the sagging lid below my left eye. He will then insert a gold weight in my upper eyelid. When I expressed concern that it would pull my eyelid down, he said the muscle that keeps the eye open is working, so that won’t be an issue. The hope is that by bringing the lower lid up and weighing the upper lid down, the two would more effectively meet, allowing more protection for the eye. What it will not do is restore my ability to blink that eye.

It helped my decision that this is a two-hour outpatient procedure. The worst part will likely be the incision in my wrist, for which I’ll have to lay off horse handling and horse chores for two to three weeks.

I hope it works, but after all the surgeries that failed to meet expectations, I’m not overly emotionally invested. But I figured if it makes my eye more comfortable and causes less irritation and dripping, it’s worth a shot.

My takeaway is that it’s OK to be OK with who you are and how you look. Anything you do
undertake should be for yourself and no one else.

The procedure involving my eye may slightly improve my appearance. But I don’t really care about that. 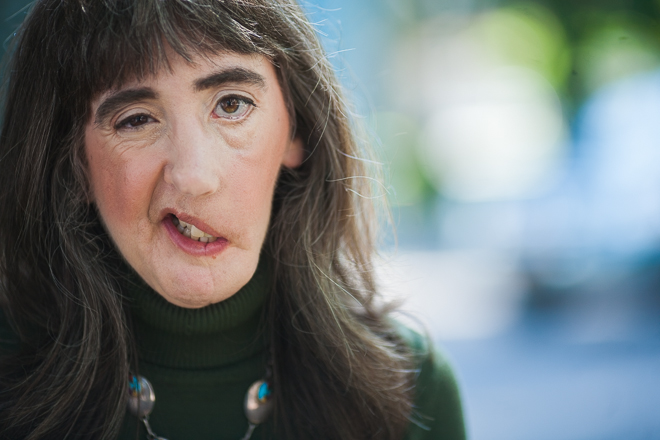