When a Simple Conversation About My Daughter Changed My Whole Day

I was in Target in a hurry to find a wedding gift, annoyed that the registry printer wasn’t working and flustered by the kids’ chorus of asking for snacks or to look at this or that.

“Is this Breanna?” a woman asked from behind me, pronouncing it “Bree-Anna” (which happens way too much for there not being an “A” in the middle of her name.)

“It’s Breh-Na, yes,” I responded. She was smiling and excited to meet my daughter. She was a Facebook follower, she explained. She had a daughter with her who seemed to be a tween or young teenager.

Her daughter pointed over my shoulder. “She has… skin peeling on her neck,” she said.

Her mother jumped in quickly: “Yes.” And then, flustered: “She has a skin… thing.”

“And she’s really… red,” the daughter continued in that flat, sassy teenager tone that makes all moms want to scream.

“Yeah, that’s how she was born!” I chirped way too cheerfully, as I started to push the cart away.

It was no longer than 10 seconds, but the effect of that encounter was a bad mood that lasted the rest of the afternoon.

I felt almost ambushed. What should have been a nice conversation with someone who actually knew about Brenna’s condition turned almost immediately offensive. Even worse, to me, is that my kids shouldn’t have to be subject to conversations like that, especially from people old enough to know better than to talk about someone’s appearance in such a rude way.

They say to not let things like that bother you; they tell you not to let ignorance have such an effect on you. But it’s really hard not to. I was nearly fuming long after our Target trip (and it didn’t help that I couldn’t locate the right presents from the wedding registry or that my kids ate most of a bag of pepperoni even before we checked out).

I was so struck by the power of that one conversation… and dismayed by how it affected me.

And then Saturday morning rolled around.

We were celebrating my son, Connor, turning 5 years old. We headed out to a local cafe for a birthday breakfast.

We’d just ordered a delicious spread of sausage and gravy and pancakes and eggs when a young woman stuck her head around the side of our booth.

She was bright-eyed and smiling and she said, “I follow your page on Facebook, and I just wanted to tell you that I think your family is just perfect and beautiful.”

I think our beaming pride could have lit up that little cafe.

How much more special did she make our outing with those heartfelt, simple and complimentary words?

It had the opposite effect as the encounter the day before. We left happy and proud. 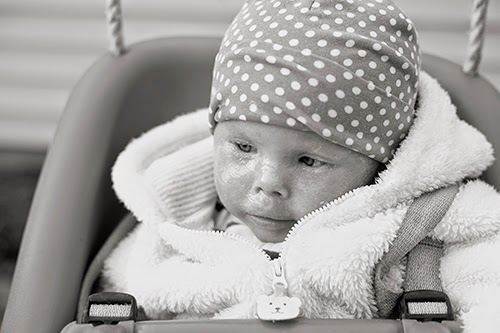 We make a hundred decisions every day about what to say to people, how to say them, what tone to use, and ultimately, what kind of person to be.

I’m finding all the time that choosing kindness – even despite what we may be internally feeling, wondering or thinking – is more powerful than we might imagine.