Sybille Paulsen, an artist in Berlin, is creating art out of loss.

Women about to undergo chemotherapy leave their hair to Paulsen, who then transforms it into intricate and sentimental jewelry as a part of her project called Tangible Truths. 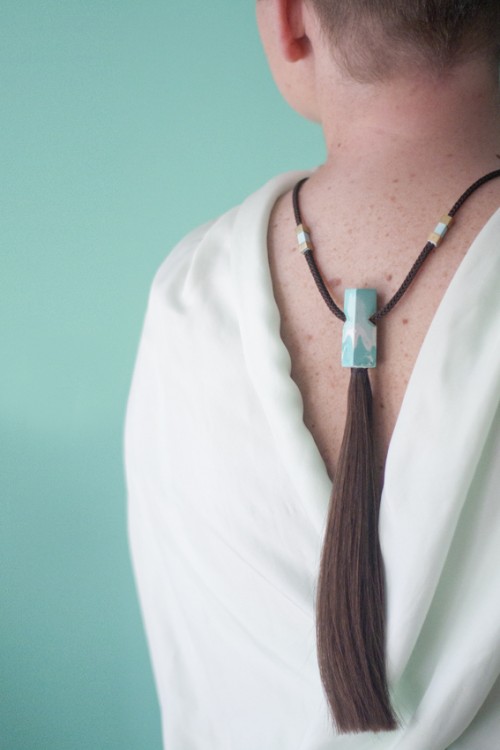 Each piece is handmade and can take days or even weeks to complete, according to Paulsen’s website. The jewelry helps women cope with the loss of their hair and the unique pieces invite others to ask questions and engage the individual about their story.

“Each woman is touched differently by the sickness and its treatment,” Paulsen wrote on her website. “Not only the person concerned but also the people around them pass through a transformation in this period. Her partner, her family and friends experience her sickness in a personal manner as well. The artifacts that I create with their hair mark this transformation.” 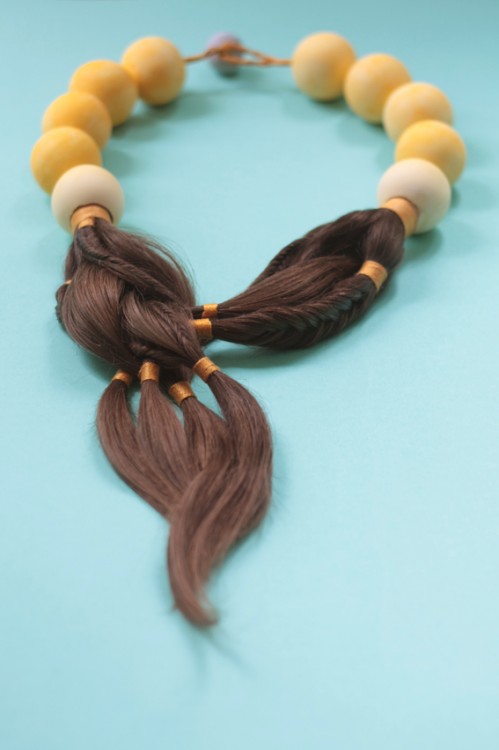 The artist’s inspiration for the project was twofold. Her fascination with unusual materials led her to use hair in her art, but it was when someone close to her fell ill that the conceptual foundation of the project was framed.

“It touched me very deeply,”Paulsen told The Mighty in an email. “Talking about it, I realized I was not alone with my feelings and thus I looked for a symbolic way to accompany the patient and his friends and family during his difficult phase.” 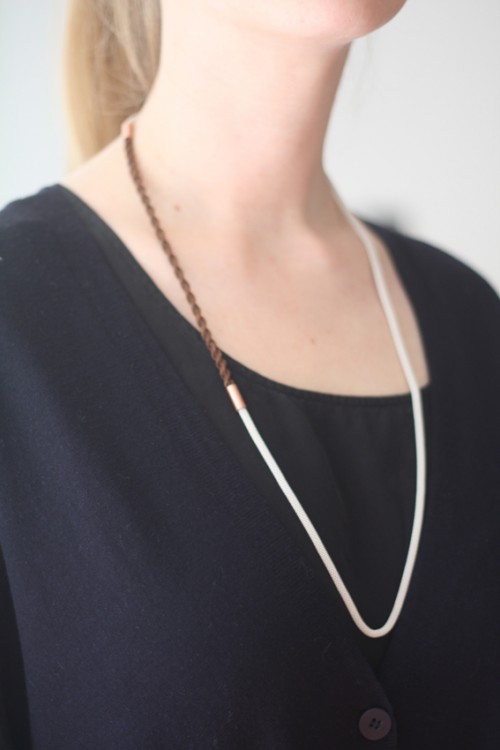 In addition to a piece for the person undergoing treatment, Paulsen has also made braided wristbands and necklaces for family members and close friends. These pieces function as a symbol of connectedness and help bind everyone together during a difficult time.

“Although it is mostly out of my control how my work is read by the observer, I can say that my intention is to create visible reminders and anchors of the love we experience during such difficult times,” Paulsen told The Mighty. “And this love encourages us to go on.” 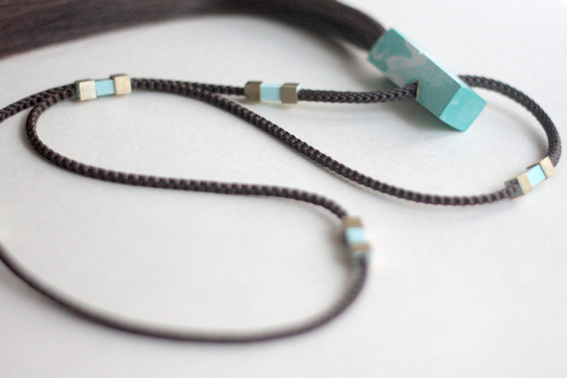 Paulsen says that reactions to her work have been positive, especially among patients and caregivers. Some people are initially put off by the use of hair as a material, but when they see the work and touch it they open up to the idea. 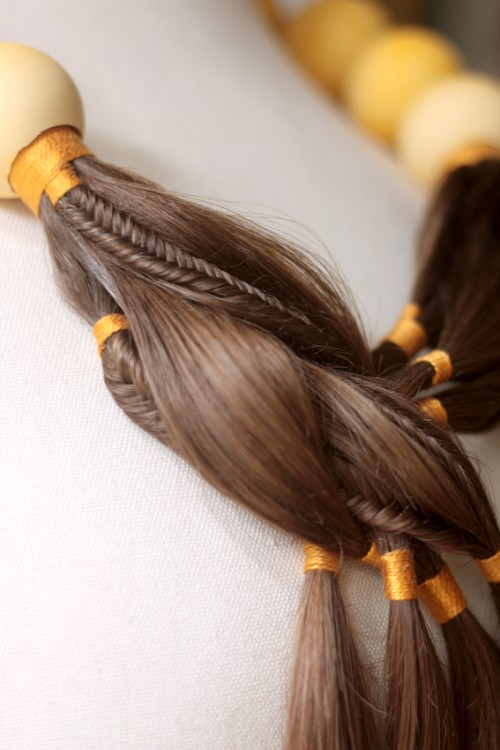 “What Sybille created touched me really deeply,”Paulsen’s first client, Mary Beth, wrote on her website. “Her work touched not only me but also those close to me here in Berlin who have seen it or seen the pictures. One person close to me even teared up because the necklace still looked like my hair and was a reminder of what it had been… I love the idea of helping create beauty out of what for many of us is a ugly process: chemotherapy.” 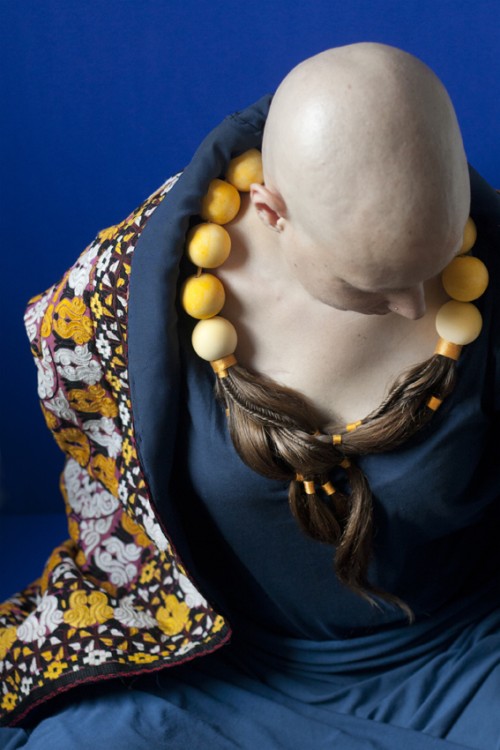 24 people are talking about this

Hi, my name is bunny. I'm here because I struggle with anxiety, depression, and PTSD stemming from medical trauma (cancer) I experienced as a teenager. I often feel alone in my struggles so I’m excited to explore this community :)
#MightyTogether #Anxiety #Depression #PTSD #cancersurvivor

12 people are talking about this
Community Voices
Uncle Mike @fair_to_middlin

I joined this site a month or so ago, I think, but I haven't been very active (here or in general!)

I've been struggling since summer 2020 with unexplained symptoms, which naturally are pretty non-specific, and a lot of unhelpful tests.

I was diagnosed in Jan 2021 with a rare form of cancer (goblet cell adenocarcinoma of the appendix) and I was incredibly lucky to be treated by one of the top specialists in the country. I had surgery in March '21 to remove all the cancer (said to be fully successful) and receive a treatment called HIPEC which should have killed off any microscopic cancer growths. I then went through a relatively brief course of adjuvant systemic chemotherapy (thought to lower the likelihood of recurrence, which is high in this disease even with optimal treatment).

I have been declared "NED" (no evidence of disease) since then, through multiple imaging scans--CT of chest/abdomen/pelvis every 3 months!--and bloodwork (this is not conclusive; the only conclusive way to determine if I have a recurrence would be exploratory surgery, and it's Not Done).

The problem? I'm not better. The symptoms that sent me to the doctor in the summer of 2020 and got progressively worse are still here. Some of them are still getting worse. Some of them have invited friends.

The oncologists say it doesn't sound like cancer or lasting effects from treatment (which was brief in relation to many patients'). Most of the other doctors I see say it must be a lasting effect from cancer treatment, or that it's depression and anxiety. My psychiatrist says it's not depression or anxiety!

Living every day with the uncertainty and the pain of not knowing what is going on with my body and WHY and what will happen next is torture. I already struggle with feeling like I'm not in control of a lot of things (and honestly, many of us aren't) but this is just one more huge thing I have no control over. It has no name. No usual course, no treatment, no prognosis. I might wake up tomorrow and be back to how I used to be. I might wake up tomorrow and be paralyzed. I don't know.

I DO have some lasting effects from the cancer treatment--mostly issues resulting from the major abdominal surgery--but I feel like I could deal with those so much more easily if I didn't have all these other symptoms that I'm told are not related weighing me down and holding me back.

And whenever these doctors mention that it's anxiety, I wonder, what exactly do they mean by that? Should I NOT be anxious about the fact that my body is falling apart and no medical professional can explain why? Should I NOT be anxious and upset that my symptoms are being dismissed and written off, just as they were in 2020, and I ended up having cancer? To me it seems like anxiety and concern are pretty warranted and not pathological.

And, of course, I was told the same thing in 2020--maybe you're just anxious, or you're depressed, or the medications you're taking for anxiety and depression are causing these issues. It's the same song and dance now, and I feel like I'm back to square one after my journey through cancer hell.

It seems so unlikely that a rare cancer at a fairly advanced stage was discovered incidentally, but that may have been exactly what happened, in my case--either that or this IS all related to cancer, but no oncologist seems to know how or why, even the ones who specialize in it!

25 people are talking about this
We use cookies and related technologies to help identify you and your devices, enhance your experience and conduct advertising and analysis. By choosing "Accept", or by using this site, you are agreeing to our use of cookies. You can read more about how The Mighty uses cookies in our Cookie Notice.
Manage Choices
Accept