One small moment of kindness and friendship between two boys is making people smile all over the world.

Katie Leigh Myers’s son, Kaden, has an incurable motor neuron disease called spinal muscular atrophy (SMA). SMA affects the motor nerve cells in the spinal cord, taking away the ability to walk, eat or breathe. It is the number one genetic cause of death for infants, according to Cure SMA.

But Kaden’s family has chosen to stay positive in the face of his condition. They advocate for a cure and raise awareness on their blog, Kaden’s Cure.

While out at a museum with her son, who uses a wheelchair because of his condition, Myers witnessed a little boy sharing and playing with Kaden. The boy was kind to her son and treated him with respect. Touched by the sweet interaction, Myers snapped a photo and uploaded it to Instagram and Facebook on Sunday, August 13, along with the following note:

To the little boy at the science museum, I don’t know who you are, but thank you for being amazing. You let my son play and engage with you. You helped him pick up balls from the floor when you saw that he could not. You didn’t ask what was wrong with him or why he couldn’t walk, you just saw him. Kaden is a lot like you — he is very curious and wildly smart. He wants to know how everything works. Thank you for helping him turn the lever when you noticed he was too weak to do it himself. You will probably never see this, but just by being you, you make this world better.

When she woke up the next morning, the photo and the story behind it had gone viral, Myers said on her Facebook page. Since it was posted, the photo been shared nearly 52,000 times.

To the little boy at the science museum, I don't know who you are, but thank you for being amazing. You let my son play...

“My dream is for Kaden to grow up in a world where he is seen before his wheelchair. He is not confined to a wheelchair — he is mobilized by one,” Myers told the website SheKnows. “[He] is one of the most independent and capable 1-year-olds on earth. He is a daredevil who wants to try everything, and we will do anything to make that possible for him.” 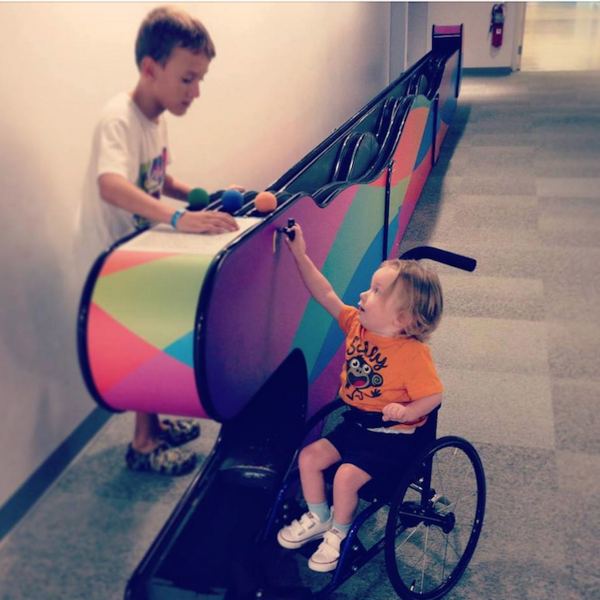