Between the beginning of July 2010 and the end of September 2010, our family ate a diet that was vegetarian, dairy-free, egg-free, soy-free, wheat-free and nut-free. As part of the treatment protocol for my daughter Sammi’s eosinophilic esophagitis, the “six food elimination diet” was supposed to remove the worst potential allergens from her system, hopefully healing her esophagus and giving us the chance to add the offenders back one at a time later until the real culprit was found. The full elimination portion of the diet was just plain awful.

While the rest of us could sneak off and have luxuries such as omelets, almonds and bagels, Sammi was living this diet 100 percent of the time. We did everything we could to make it palatable. We made elaborate fruit salads and learned to cook ridiculously complicated foods. We spent a lot of time at the farmer’s market trying new produce. Our friends and family circled the wagons and did what they could. During all of this, I can only really remember snapshots — the most powerful moments preserved in a visceral feeling of either dread or deep relief.

One of the strongest memories I have of that time, though, was the deep compassion bestowed on us by an employee of the Jelly Belly Candy Company. As a special treat for our kids, their great aunt had offered to take them on a tour of the Jelly Belly factory about an hour away from home. As luck would have it, Jelly Belly’s jelly beans are free of all the top eight allergens**, which I confirmed on the phone before they left.

They had a wonderful time at Jelly Belly headquarters and came home with souvenirs and, unsurprisingly, mountains of jelly beans. It was a moment of normalcy in a totally abnormal summer. And then, I read the words on the side of one of the bags of candy they’d eaten on the tour: Produced on shared equipment with peanuts.

I can’t overstate the panic I felt. Even though Sammi would not get sick from this, it meant the previous four weeks of her strict diet had been in vain. This excursion fell nearly at the end of the first six weeks of the diet, after which Sammi would have an endoscopy and then be given permission to take a short break from restriction to go on a family trip we’d been planning for more than a year. This possible cross-contamination debacle would force us to cancel that trip and start the six weeks of her diet from zero.

I went into a tailspin, grasping at anything I could imagine. I called the Jelly Belly factory again, horrified and furious and devastated all at once. What happened after that is best described in this excerpt from the letter I sent to the Vice President of Marketing for Jelly Belly.

“…I made a frantic call to Jelly Belly to see if perhaps the bags had been mislabeled. Kit McCoy called me back right away and immediately set to work checking lot numbers, rechecking with the production facilities and calling me several times that day to update me on her progress. While she did that, I steeled myself for the possibility that, because we may have contaminated my daughter’s system with peanuts, we would have to postpone her endoscopy and cancel a family vacation we had been planning for over a year. Our window of opportunity for making this decision was very narrow.

“Imagine my relief when Kit contacted me that very day to give me the news that the bags of Jelly Bellies that my daughter had eaten were simply “old film” – the beans inside were produced without any offending allergens. Kit’s quick research saved us an additional month of restricted diet, the loss of our long-planned vacation and tremendous heartache. She deserves your praise and any commendation you can give her!”

I don’t know anything about Kit McCoy. I don’t know if she understands what she did for us, but I’ll say this: Without Kit McCoy, and her compassion, we would have lost this moment below during our vacation three weeks later: 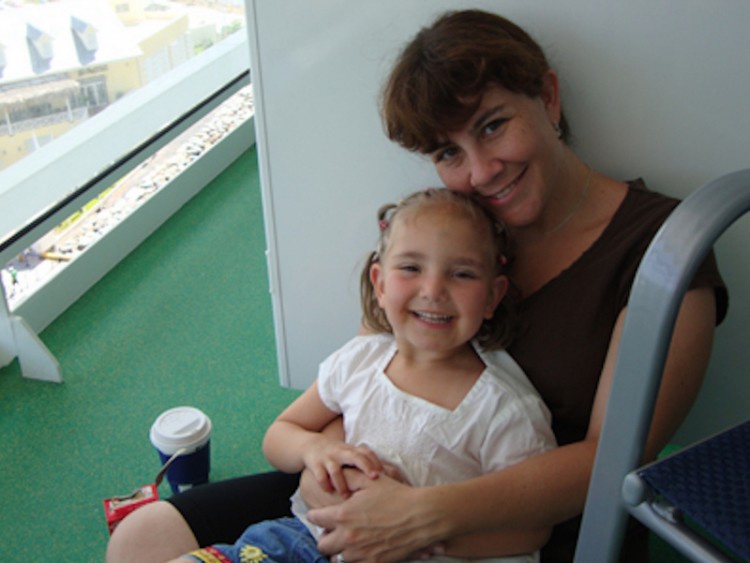 And more than that, I would have lost time, faith and so much energy on recreating what we’d done all over again. Kit McCoy, wherever you are, you gave us time. You gave us space. You gave us hope.

** NOTE ON ALLERGENS: The elimination diet protocol our family followed required only that we avoid foods prepared on shared equipment with the foods our child was avoiding. Jelly Belly does share a facility with foods that include tree nuts. Also, while coconut was considered a fruit by our doctors, some consider it a nut. Certain Jelly Belly candies do contain coconut. For more information about allergens, read the Jelly Belly FAQs or call 1-800 -522-3267 and talk to a Jelly Belly representative.

The Mighty is asking its readers the following: Describe the moment a stranger — or someone you don’t know very well — showed you or a loved one incredible love. If you’d like to participate, please send a blog post to [email protected] Please include a photo for the piece, a photo of yourself and 1-2 sentence bio. Check out our Share Your Story page for more about our submission guidelines.