Hello, Lexi. I don’t know if you remember me, but we met twice before we had to say our last goodbye. Your mom is my aunt, and when she had you, I first learned of spinal muscular atrophy (SMA). I remember your room was filled with machines that sustained your life, and you required intense 24/7 care. The rest was a blur, but I know you were loved by so many.

Little did I know that not long after your passing, I would know more about you than I had ever dreamed. My son was born less than a year after you had passed away. We knew something wasn’t quite right when he was a few months old. I remember talking to your mom and describing his symptoms to her. Knowing that you were so special, I felt connected to her. It wasn’t long before our worst fears were confirmed, and my son had the same devastating disease that took you. Suddenly, everything I knew of you became everything I knew of SMA. Your mother’s reality became mine. 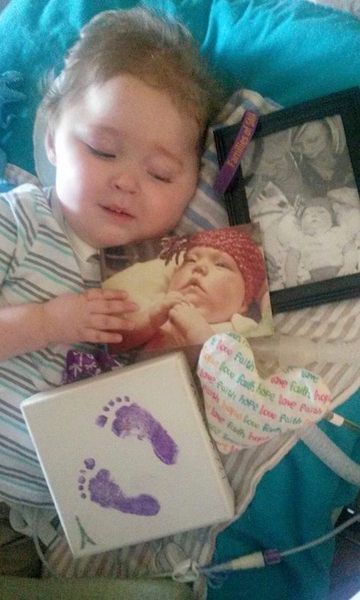 Spinal muscular atrophy is a genetic neuromuscular disease that affects the ability to sit up, walk, talk, breathe and swallow. “One in every 50 Americans is a genetic carrier,” according to Cure SMA. When two carriers have a baby, that baby has a 25 percent chance of having SMA. This disease is considered rare but not for our family. Your mother and father are carriers just like my husband and me. We have a daughter who we now know is a carrier as well. The family refers to you as our angel and my son as our warrior.

In the early diagnosis of my son, no one I personally knew understood what I was going through like your mother. I asked her raw questions and I know it brought up painful memories. A world she thought she would never see again was in front of her. You fought hard but your battle was short. As your mother continues to learn to live without you, without SMA, I learn to live with it. I’ve become integrated into the SMA world for almost two years now.

If it weren’t for you I wouldn’t have known our fate so soon. Because of you, I was able to prepare, accept and fight for my son. You have been my light, and your mother has been my guide. I think of you every day as I care for my son, as your mother cared for you. I miss you and wish I would have known you better. I wish you could have met my son. I wish you could be here so we could fight our unfortunate genes together.