This morning a local mall hosted a Sensitive Santa event. It was open to kids with autism and other special needs and took place before the mall officially opened for the day. The lights were down and there was no music playing over the speakers and no shopping bags to trip over. A Christmas movie was playing in one corner and there was a table filled with arts and crafts in another.

At the center, there was Santa. He sat in his green suede chair in front of the largest Christmas tree I had ever seen and exchanged kind words with brave boys and girls. I can imagine what they talked about: the new toys they wanted and if his beard was real. Words and phrases my son Caiden may never say.

We knelt in an empty area, still close enough to see the Big Man but not be in the way as we attempted to soothe Caiden out of a meltdown. We had gotten almost all the way to the check-in table when he lost it. I tried desperately to hold back the tears as I gave the woman our name; failing miserably, it took several attempts to get an audible response out.

For 15 minutes we rubbed circles on his back, offered toys, snacks and to carry him and tried to protect his head while he writhed on the floor. He didn’t want to leave, but he didn’t want to be there, either.

I cried some more, but I wasn’t embarrassed. He had done so well last year and even been excited to see Santa, but the effects of his most recent regression were out in full force. He was going to miss out on something he had enjoyed because his diagnoses got in the way. It wasn’t fair and it made me angry seeing just how much he had lost to his mysterious condition. He deserves a magical moment as well. I wanted him to have that, especially after how hard this year has been on him.

The woman who seemed to be running the event (I wish I’d gotten her name) pulled up videos on her phone to try and distract him. It didn’t work, unfortunately, but she was determined to help us.

He eventually noticed a few balloons on a shop sign and she allowed him to play with them. He immediately calmed down, even bouncing them back and forth between the two of them. Playing with a complete stranger, he was happy.

We tried again to approach Santa, but he simply wasn’t having it and began to get upset so we backed off.

Then she hit us with it.

They were working on getting him more balloons. If we wanted to wait a few more minutes, we could lure him in front of the camera with them. Definitely worth a shot. 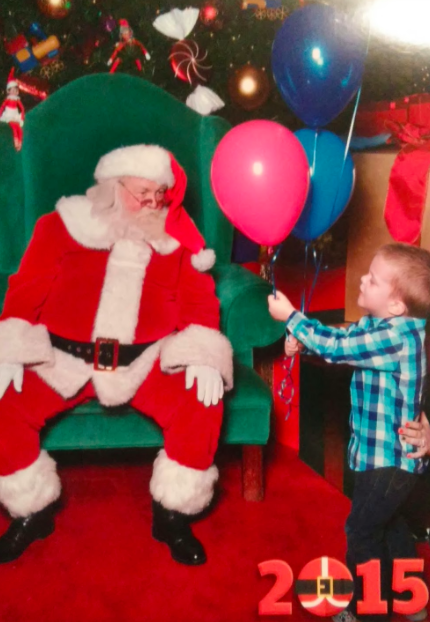 He was still nervous, to the point that he crawled in front of Santa to get to the balloons, but he smiled. His face lit up and we were able to get a slightly candid, slightly staged picture of them. It was perfect. As quickly as he could he ran past Santa to show Daddy his balloons, but they’d captured an amazing moment.

Santa held his hand out to me and gave me a hug and pat on the back. He said Caiden was a great kid and we were doing awesome. I sobbed some more and went to pick out our pictures.

When Santa says you’re doing a good job, you just can’t help but believe it.

I expected him to have a hard time, but I wasn’t prepared for just how difficult it would be for him — or how perfect his picture would come out despite the obstacles in getting it. Before we left, however, I made sure to thank the woman who went out of her way to get Caiden some balloons so we could have such a magical picture. I hugged her and we both cried together just watching how happy Caiden was with the balloons.

As we were walking away, I heard her say to the cameraman, “That’s the reason why we do this.”

And I’m so incredibly thankful there are people like her who do.

The Mighty is asking the following: Write a letter to a stranger or someone you don’t know well who showed you incredible love during the holiday season. If you’d like to participate, please send a blog post to [email protected] Please include a photo for the piece, a photo of yourself and 1-2 sentence bio. Check out our Submit a Story page for more about our submission guidelines.