To the Cashier Who Asked Me, ‘Is He Spoiled?’

The checker at Food Lion judged first with her expression and then with harmful words I never get used to. “Is he spoiled?” she asked, not once but three times, as I couldn’t hear her over the hysterical crying of my son, Amos, strapped in the baby seat of the cart, slightly damp from the late afternoon rain.

He had reportedly not napped at our nanny share arrangement, and it was late afternoon on a cold rainy Friday, and darn it, he (like me) did not want to go to the grocery store. Since he could not shout his protests in toddler expressions, he wailed loudly with a resplendent showing of streaming tears dripping from his chin and nose. If I held him, then who would put the groceries in the cart? I continued to plug away quickly, my older boys loading the mini walkavator and my daughter doing her best rendition of “Wheels on the Bus.” But the crying continued. I told her I didn’t think he was spoiled, but then again, how was I to know? 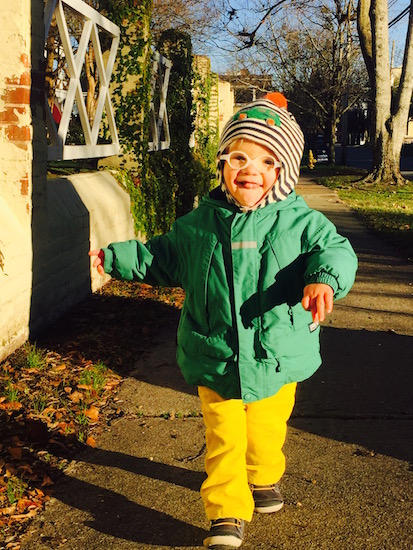 I struggled with the realization that his communication was so limited, and I often guessed whether he wanted or needed something. I feel like we are on the right track, upping our weekly speech visits, trying new communication devices and continuing to encourage his receptive language as well as expressive through cheering, clapping and big hugs for even the utterance of “more.” All those things were good, but as any mother with a child with special needs might feel, it never seemed good enough, and the nagging guilt naturally came with the occasional sorrow whether every few hours, couple of days or maybe even a week. I was struck with sadness as I watched my dear friend’s 2-year-old son have a tantrum over the water he had been offered; he stated in no uncertain terms, “I don’t like water, me want juice!”

For a moment I was relieved as the rolling and thrashing so resembled my Amos, matching mad toddlers. But then just as quickly the realization came that they were so far from one another because his mother knew why he was pissed and and ignored her small son’s theatrics. I too ignored, sometimes in the morning as I made breakfast, after school as I tried to read homework question to my daughter and most often in the evening when my energy reserves were depleted and the arbitrary number of 8 p.m. meant good night come hell or high water.

On the other hand, I also held and cuddled my frustrated little one, rising each day 30 to 45 minutes earlier so that I could hold him and watch “Caillou,” so he would have time to wake up pleasantly. I would break from the many daily tasks to give him a cuddle when he said, “Up,” and I had silently cleaned up gallons of applesauce and yogurt thrown vehemently from a high chair tray.

Was he spoiled? I had absolutely no idea. If his mind could tell me at night that his tummy hurt as I deposited him in his crib, then no, he was anything but spoiled and actually on the spectrum of being neglected.

Or did he just not like my choice of applesauce, so he angrily projected another cup of applesauce all over the floor? I had never really scolded him for this behavior, just gave a firm no and then cleaned and cuddled him again. If this was the case, then yes, he was being spoiled.

However, what if the applesauce was fine, but he had bitten his tongue, and I cleaned him off and deposited him on the floor so I could wipe up the applesauce while ignoring his wailing? Again, closer to neglect and my son thinking I didn’t care he was hurt, when nothing could be further from the absolute truth.

Is he spoiled? I don’t think so, as I feel unfortunately that my tired self shows up more than my compassionate self. So to the grocery checker, please know that I am trying hard, as I want nothing more than to be a good mama to my Amos. I am so honored to have the blessing of loving and raising his precious soul. Perhaps I am spoiled though.

The Mighty is asking the following: Write a letter to anyone you wish had a better understanding of your experience with disability, disease or mental illness. If you’d like to participate, please send a blog post to [email protected] Please include a photo for the piece, a photo of yourself and 1-2 sentence bio. Check out our Submit a Story page for more about our submission guidelines.