Edward Bright’s arms and legs were amputated when he developed meningitis as a child, and after his 16th birthday last month, Bright began the process of switching from the U.K.’s Disability Living Allowance (DLA) benefit system to Personal Independence Payments (PIP), according to the Mirror. However, rather than a seamless transition, Bright’s parents were furious when the U.K.’s Department for Work and Pensions (DWP) notified the family that Edward would lose his benefits if he failed to attend an assessment meeting at the DWP’s office in Derby, England.

“They wanted him to go to Derby and even gave instructions on how to walk to the office from the station,” Edward’s mother, Clare Bright, told the Mirror. “He’s in a wheelchair waiting for an operation in April. He can’t walk. It’s a shamble.” After receiving the notice, the family demanded a home assessment, but was still furious with the response, which asked about Edward’s work prospects and daily life.

“It’s­ absolutely disgusting,” Edward’s father, Steve Bright, added in an interview with the Mirror. “He’s a quad amputee for God’s sake. It isn’t like he’s going to get better. He isn’t going to suddenly grow new arms and legs … They know full well the extent of his disabilities. They have no hearts.” Edward’s story is featured on the cover of the Feb. 18-edition of the Mirror, and hundreds of readers have reacted on the publication’s Facebook page:

“It's absolutely disgusting.” Posted by The Mirror on Wednesday, February 17, 2016

To add insult to injury, Clare Bright says the family was told Edward would be given interim payments while being assessed, but he has yet to receive them, according to the Daily Mail. Officials have since admitted to making a “mistake,” adding that the letter should not have been sent in the first place and that the case will be resolved “imminently.” A DWP spokesperson said in a statement to the Daily Mail, “In this instance a paper-based assessment has been completed and there is no need for a face-to-face assessment.”

“There should be a mark on his case saying, ‘He is disabled and always will be – don’t contact him for assessment,’” Steve Bright told the Daily Mail. “It should get to the point where, with certain disabilities, there are no questions asked. I can see why they have to do these assessment, because of the amount of people who falsely claim benefits. Sadly, it’s people like that make it a lot harder for the genuine cases.”

In 2013 the DWP introduced the Personal Independence Payment (PIP), which replaced the Disability Living Allowance (DLA) benefit system, and there have been countless complaints ever since. In June 2014, the Public Accounts Committee described the implementation of PIP as “nothing short of a fiasco,” according to The Independent on Sunday. In an article published in August 2015, the publication reported nearly 25 percent of people applying for disability benefits are encountering “serious difficulties,” including delays, unfair dismissal of claims and confusion over eligibility.

Tomorrow's Daily Mirror front page:Prove you are… Posted by The Mirror on Wednesday, February 17, 2016

Correction: A previous version of this article referred to Bright as a quadriplegic. Bright is a quadruple amputee. 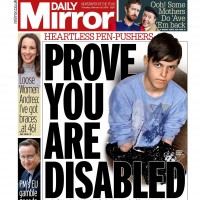