My early childhood was fairly uneventful medically apart from 70 percent hearing loss in one ear and no sense of smell. I reached what I now know to be the normal pre-puberty Tanner stages, and up to the age of 12 years nothing seemed to be amiss. Going through my early teenage years it was a case of waking up each day and hoping something was going to start to develop. I knew it was getting late to start puberty, but I assumed it would all start soon enough. Eventually I was the only one in my year group not to show any development, and this was certainly noticed by the rest of the year group.

A routine health inspection by the school nurse as part of the health screen for a permit to work on a newspaper delivery round led to a referral to a general practitioner at the age of 15 years. At that stage, the general practitioner said I was just late starting and I should wait and see. I was sent on my way.

Up to the age of 14, I was a normal enough schoolboy, I think. I was in the Scouts and was involved in my local cricket club. I gradually was left out of social events as I lacked the confidence to go and had no sexual drive at all. I knew the basics from a purely physical point of view but had no libido or interest in any sort of teenage activities. I made up excuses not to go to social events, and eventually I stopped being invited.

By the age of 17, it was clear nothing was starting so I was referred by my GP to my local general hospital, first to a general medicine consultant and then to a urologist. I was put on low dose injectable testosterone (Sustanon) monthly but not offered any follow-up assessment; it was just assumed everything would all start naturally.

By the time I went to university, something was obviously wrong, but I did not have the drive to do anything about it. I even stopped taking the Sustanon for a time as it seemed to be having no effect on me apart from a slight growth spurt. Looking back now, there were opportunities for me at university, but, without the drive and the knowledge of the condition, I did not have the interest or confidence to notice them, let alone follow them up.

The first time I saw an endocrinologist was when I started my first job, as a biomedical scientist at the Royal Free Hospital in London. I had studied endocrinology and hematology as part of my biomedical science degree and had a bit of an understanding on how puberty was supposed to work. Choosing the endocrinology pathway for my biomedical science degree was partly driven by the wish to know more about my own situation. When I started work at the Royal Free I was determined to talk to an endocrinologist even though my GP still had not referred me. Under my own volition, I contacted Richard Quinton, at the time a senior registrar in endocrinology under Pierre-Marc Bouloux. One of the first questions he asked was, “Do you have a sense of smell?” It was the first time any doctor had asked me that question. It was also the first time any doctor had mentioned Kallmann syndrome to me.

The correct diagnosis soon followed, and I was prescribed a suitable dose of testosterone, first in the form of Testogel and then later Nebido. The delay in suitable treatment from the age of 16 to 22 meant I went six years with a very low testosterone level, with the subsequent delay in secondary sexual development and bone strength.

Blood tests confirmed the low levels of follicle stimulating hormone (FSH) and luteinising hormone (LH) that, combined with the anosmia, confirmed the diagnosis. Magnetic resonance imaging showed the absence of the olfactory bulbs, and a bone density (DEXA) scan showed osteopenia. At the time of diagnosis, I probably looked 10 years younger than I was and had never shaved.

On a physical level, the late diagnosis has left me with osteopenia, which is still present but at least not deteriorating. Recently, I have also been found to have a severe vitamin D deficiency, which is probably contributing to the osteopenia. I am now prescribed a 1,000 IU vitamin D supplement. The lack of gonadotrophins and hence androgens in my teenage years also resulted in a delay in the development of secondary sexual characteristics. The lack of testicular development will always be present. The relative lack of penile growth remains a constant frustration. There will always be the question of what would have happened if testosterone treatment had started earlier and at the physiologically correct dose.

I did achieve a certain amount of testicular development and limited sperm development while on a gonadotrophin clinical trial. This lasted for only as long as the trial lasted, but it does give me hope for future fertility, and the increase in testicular size did bring a certain degree of reassurance and improve my self-confidence.

My delayed diagnosis has had the biggest impact on my psychological level. Judging by my own experiences and those of fellow patients I have met and talked to, this is an area that is often overlooked.

With puberty and adolescence being so closely linked, if a patient does not enter puberty at almost the same stage as his peer group, he risks being left behind socially and emotionally, as well as physically. I feel this emotional development of social interaction is difficult to catch up on and is often a result of feeling socially isolated when puberty fails to start.

I have not married, never had any serious girlfriends and have very limited sexual experience. I think this is a direct result of my lack of emotional and physical development while a teenager and young adult. Although many fellow patients I talk to do get married and have relationships, my experiences are by no means unique.

I think early diagnosis plays a key part in being able to build the confidence to develop relationships. The later you start, the harder it is to catch up. From my experience with fellow patients, it is those who are diagnosed and treated early who cope with the condition better. For many, the very fact they can put a name to the condition and realize they are not the only person in the world not going through puberty is a big step in being able to cope with the condition.

Once I was diagnosed, the variation in possible testosterone treatments available became apparent, as did possible fertility treatments. Up to the point of diagnosis, I was not taking the most appropriate dose of testosterone, which affected my energy levels and sex drive. There are several different forms of testosterone replacement methods, which suit different people at different times. Since being diagnosed, I have tried a few, including the gonadotrophin injections, which I found to be particularly beneficial to me as they induce a certain level of fertility and allow for limited testicular growth.

The most important treatment is possibly the diagnosis itself. Being labeled as a “late starter” or “late bloomer” in your early 20’s can be very humiliating. The ability to put a label to your condition and knowing it is a recognized condition are the first steps in coming to terms with a condition that is difficult to describe to others. The use of patient support groups on Yahoo and Facebook also play a big part in being able to talk about the condition, but this is possible only once the correct diagnosis has been made.

The Mighty is asking the following: Were you diagnosed with your disease, disability and/or mental illness as an adult? Tell us about the moment you finally got your diagnosis. Check out our Submit a Story page for more about our submission guidelines.

Share
or  Copy Link
Link copied to clipboard.
Be first
329 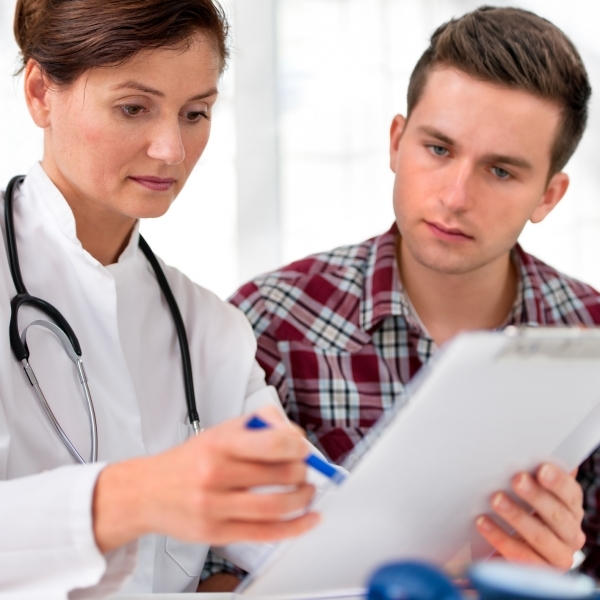