You’ve always known a lot, probably too much, about me, even before the day you found my knife. When I let you see my knife, I should say, because I was so desperate for someone to see, to know, my filthy secret — to have someone I wouldn’t have to lie to. Even before then, you’d understood. You didn’t question my insecurities or quietness. So I’m not sure why I assumed this one last big fact would change things. I did think that, though.

I honestly believed, as I turned my back and told you to go away, to leave me alone, that you would do as I said. I’m not sure you’ve realized how important it was that you didn’t. The fact that you stayed, poked my shoulder and smiled at me with those eyes that said I wasn’t a freak, the fact that you gave me a lift home and teased me like always — it saved my life.

Four months later, I stood at the edge of a road bridge. You were my proof the world didn’t hate me and someone would miss me if I jumped. You don’t know that. Six months later, you sent me an email from halfway across the world saying you’d like to hear from me. I realized maybe our friendship wasn’t only me relying on you, that maybe people could actually want me.

One year later, you came up to me after my first therapy session and asked me how it went. You smiled sympathetically with those eyes, which still said I wasn’t a freak. You didn’t know if it hadn’t been for you, I’d never have gone in the first place.

I won’t tell you these things either, because it would feel weird. But I hope you know how much I love you.

People, if you have a friend like me, a friend who doesn’t smile much, then smile at them anyway. It might just save a life. 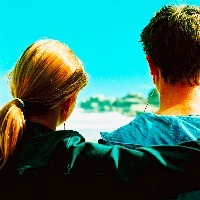