Dealing With a History of Sexual Trauma as a New Mother

Editor’s note: If you’ve experienced sexual trauma, the following post might be triggering. If you or a loved one are affected by sexual abuse or assault and need help, call the National Sexual Assault Telephone Hotline at 1-800-0656-4673

I distinctly remember sitting in her office, choking back tears as she kindly asked a few questions about how I was feeling and what challenges I was facing with postpartum depression. My infant twins, then nearly five months old, rested somewhat contentedly on a blanket at my feet. After a few minutes discussing the distinct changes wrought by a difficult childbirth and the early months of parenting two infants simultaneously, she nonchalantly asked if I had been sexually abused as a child.

I looked up briefly and whispered yes, as the tears sprang to my eyes. Then as quickly as possible, I offered a cursory response that I had already dealt with it. I told her I was over it and that there was no need to go there. Even as I said the words, I knew they weren’t true. As much as everyone insisted I should be over it, I wasn’t. I hadn’t dealt with it. I just could not bring myself to believe the trauma inflicted on me decades earlier was part of the reason I found myself sitting there in her office. I was unwilling to open Pandora’s box and let the evils of my past seep out to sully my present.

Sure his face haunted me, perhaps more in those first few weeks of my babies lives than in the decade preceding it. Yes, I did have recurrent nightmares of him showing up and harming my children or raping and killing me in their presence. It was true that every knock at the door sent shivers up my spine as I pulled my babies in closer to me. But still, I admonished myself for my jumpiness. Of course I was hyper-vigilant and intensely alert, but shouldn’t I be overly attentive to the needs of my children? I tried to quell the incessant aching fears that plagued me. I desperately attempted to quiet the echoes in my head. I chalked up as much as I could to the postpartum depression, to the sheer exhaustion of caring for two tiny humans, to the drastic changes in our family and in my identity, as well as to the isolation of suddenly being home alone all day, every day. I did everything I could to ignore the sound of his voice reverberating through my head. I retreated from myself within myself.

Just get over it. Stop being so pathetic and overly emotional.

I repeated these words over and over to myself like a mantra, the same words that had been thrown in my eyes like sand for as long as I could remember. It wasn’t supposed to bother me anymore. I felt the weight of the rebukes from my past as I descended further and further into the darkness.

I couldn’t tell anyone I believed I struggled with infertility because of what he had done to me all those years ago. I refused to let anyone know every time gravity demanded attention and I fell and ended up in the hospital to ensure the safety of my babies, or when I could not feel one of my babies kicking, that I panicked, terror stricken and certain that this was indeed proof that my tainted body should not be allowed to hold these precious burgeoning beings. I was entirely convinced the bleeding that was more than reluctant to cease during their birth was further confirmation that I, a woman with a history of being sexually abused as a child, should not be allowed to birth and parent children. My oldest son, my first wish, was carried and delivered by my significant other.

From the moment I knew we would have a child, my entire world tilted on its axis. I adored him and doted on him. His birth changed everything for me, but it had not been my birth. My body had not carried and created him, saving me — at least in some respects — from the unremitting anxiety and flashbacks. And yet there I was, six years later, being split wide open to deliver two tiny humans I had a hard time believing I deserved.

But I couldn’t tell her any of this, at least not yet. I could not betray the silence that had been cast upon me and that, by then, I had learned to wrap around me like a cloak. So while the abuse itself had stopped, the suffering had not. The terror may have ebbed into the background a bit, but it was still screaming for attention in a way that I had not been able to as a child.

Even with my reticence to discuss it, she knew. She was entirely aware it would not slowly recede into the recesses of my mind. The past was pleading for attention, but she sat with me and held me with her words until I felt safe and steady enough to dive deeply.

Nearly a year later with my children safely in the care of a trusted friend for that hour, I sat down, sighed deeply and said, “You were right. Things are about to get more interesting. I do need to talk about what happened to me as a child.” And with that, I cracked open the lid and let the weeping child of my past out into the room.

Some days the ghosts of my childhood still scream, demanding compassion and attention, other days they just whimper and settle down with a quick glance of reassurance. But, try as I might, they never go away completely. My past is part and parcel of who I am – my experiences, my memories, my truths. The good and the bad, nestled together to create a collage of a life worth living.

This piece was originally published on Be You Media Group.

If you or a loved one are affected by sexual abuse or assault and need help, call the National Sexual Assault Telephone Hotline at 1-800-0656-4673 to be connected with a trained staff member from a sexual assault service provider in your area. 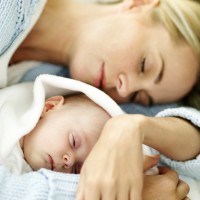