EpiPens Are Not Just for Kids

By now, most people have heard about the unconscionable hike in the cost of EpiPens, the emergency epinephrine auto-injectors used by people with severe allergies to stop the swelling of their throats that can kill them if they’ve been exposed to the food to which they’re allergic. These life-saving devices were earning Mylan, the manufacturer of the EpiPen, over a billion dollars a year by the end of 2015. As has been widely reported in the press, the company decided to hike the price of the auto-injector once again this year, just as they have every year since they acquired the patent in 2008. As a business, this is a brilliant profit-making move. They have a virtual monopoly on epinephrine auto-injectors in this country, and as such, Mylan now earns 40 percent of its total profits just from the sale of the EpiPen.

As a mother, I appear to be a good target for Mylan’s marketing efforts, which are well-documented. After all, parents of children with food allergies are constantly worried about the dangers in a world filled with potential allergy triggers. These mothers — wiping down surfaces, bringing “special” cupcakes to class parties, handing specially-printed cards to waiters and walking back into restaurant kitchens to inspect the cooking surfaces just to be sure — are easily convinced to buy one or two extra EpiPens. One for home, one for the car, one for school, one for Grandma’s house…

Mothers do this largely because we cannot trust children to advocate for themselves in the same way we can advocate for them. Children are more often the ones pictured in the ads, like the ones here and here. These hits parents exactly where they are most vulnerable. Mothers, in many cases, will do almost anything to protect their children.

What mothers are not as likely to do is to protect themselves.

As I clutched my EpiPen in my hand on the way to the hospital, hoping I could make it without having to inject myself, the reason I hesitated was not the cost of replacing it. I was simply worried that the shaking, heart-pounding, and panic would be too scary for my children in the back seat to watch. However, if I had to choose between feeding my children that week and using the EpiPen — which might cost me $600 to replace — I don’t think the decision would have been any different. I probably would hesitate as long as I could before using it. That’s what mothers do: we put our children first.

Yesterday, I went to my allergist for a checkup and to get a refill of my EpiPen prescription. She scolded me about my decision not to use the EpiPen right away when I’d had the reaction to the vitamin. “If you wait too long,” she said, “it might not work at all. That’s far, far scarier.”

“I know,” I said. “And I have great insurance. That Mylan CEO is going to hell. Can I get the generic instead, please?”

The pharmacist paused. “I don’t think there is a generic for this.”

“Yes, there is,” I said. “My doctor wrote the prescription that way. Please take a look.”

She scuttled back to the pharmacy and came out a few minutes later. “Um, I’ll have to call your doctor to get this authorized.”

“That’s OK,” I said. “Go ahead. But really, it should be on the prescription. I saw her type it in when she faxed it to you.”

The pharmacist sighed audibly. She disappeared again, and I could hear her calling my doctor. When she returned, she said my doctor had said it was fine. “But, you know, I don’t think we have any of that generic in stock. We’d have to order it.”

“That’s fine,” I said, mentally deciding not to eat out until I had a new EpiPen in my purse. “Go ahead and order it.”

She disappeared a third time, this time for quite a while. When she returned, she said, “You know, you may as well get the name brand. The generic doesn’t really save you enough to be worth it.”

I was surprised, but asked, “Really? How much is the difference?”

The pharmacist looked at her screen again. “Only $50 dollars less.”

For the fourth time, she disappeared back to the pharmacy and came back with another pharmacist. “He says there’s a coupon online for the EpiPen. You can download it to your phone. Do you want to do that? It should save you more.”

“Oh,” I said, swayed by the possibility of paying a similar price for the name brand as for the generic. “OK, I’ll do it.”

I sat down in the chairs to the side of the pharmacy and filled out the forms on EpiPen.com. At the end, an image of a card, front and back, came up on my screen, and I held it out for the pharmacist to scan.

And they were. After all that time, back and forth, discussions and asserting myself and standing my ground, I had the name brand EpiPens in my hand at no cost at all. What had just happened? I’ve learned since this discount program Mylan is offering helps Mylan as much as it helped me, according to the Washington Post,

Let’s say you have a choice between the EpiPen, at $300 with the new coupon, and the generic Adrenaclick, which is $140 with its own coupon. You choose the EpiPen… but since the wholesale price of the EpiPen is greater than the generic, the difference will be picked up by employers, unions and government agencies and other insurance providers. That cost will eventually be passed back to you in the form of increased premiums or prescription drug prices.

So, I saved myself $280 yesterday by pushing against whatever incentive the pharmacist had to keep me using the name brand. In the end, though, my insurance is still paying Mylan for their portion of the price, and the cost of this drug will keep getting higher and higher. Some other mom with a fish or peanut or bee sting allergy will stand in a pharmacy and simply shell out the $280 with her hungry toddler standing nearby. She may choose that medicine instead of something else she needs, or she may hear the price and say, “Oh. I can’t afford that. I’m… sorry. Thanks anyway.”

And she’ll walk away.

And her trip to the emergency room when she has her next reaction will cost her insurance company far more than the cost of an EpiPen. Unless, of course, she doesn’t make it to the ER at all.

It’s not just children with allergies being affected by Mylan’s unforgivable greed. It’s entire families. In the end, perhaps the loss of some of their best customers to death by anaphylaxis will be the motivation Mylan needs to lower its prices.

Related: Here’s What You Should Know If You’re Struggling to Afford EpiPens 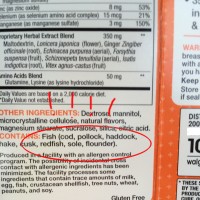