What My Husband and I Wish You Knew About Combat PTSD 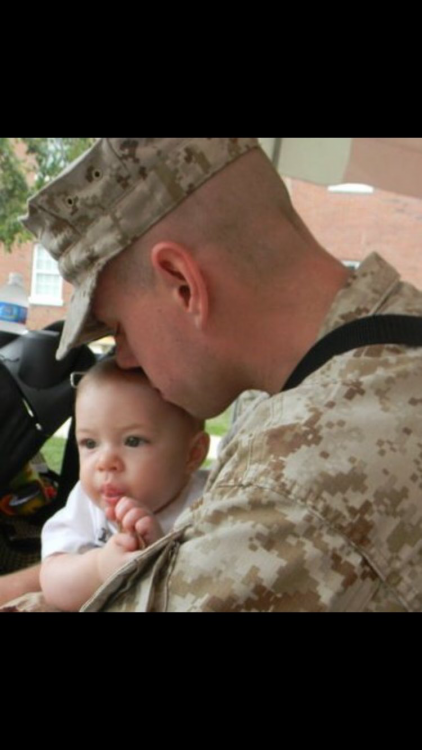 My husband is a combat veteran. He was a Corpsman in the U.S. Navy for five years, and was attached to a Marine battalion that deployed to Afghanistan.

My husband has been diagnosed with Combat PTSD after his deployment in 2012. For respect for him and others I will not go into detail about the events of that deployment. Amazing men were lost, and amazing men were permanently scarred emotionally and physically.

PTSD stands for post-traumatic stress disorder. It can change the entire way you perceive the world.

Over the years I have watched him struggle and I felt helpless. It’s like nothing I do or say helps. I try to never question his actions or his feelings. I always try just to be that listening ear he needs.

We have recently gotten to a point in the last four years where he is more open about his thoughts with me. He’s more willing to share what it’s like in his mind. We got to talking about what he wished others would know about his PTSD. With his permission, I decided to list the top 10 things he and I would like others to know about his disorder.

First and foremost, PTSD does not automatically make someone “crazy.” I’ve noticed that when I actually tell another person he has PTSD, I’ll sometimes see that look in their eyes: Oh no, he is going to go bananas! Watch out! Stop it with that nonsense. It’s rude, and I can totally tell what you are thinking. He is a loving husband and a caring father.

When living with Combat PTSD, you are constantly surveying your surroundings. For the length of his deployment this was one key to survival. He always had to be ready, always had to be watching the landscape and the people around him. Always had to anticipate any harm that might come. This is ingrained into him. It’s especially noticeable when he is in large groups of people. Our last trip to the Zoo he was people watching more than he was watching the animals.

He is not indecisive because he is trying to be difficult. In his mind, one wrong decision means death. It did over there, anyways. He carries that thinking with him still.

PTSD keeps him up at night, literally. The fact that we have two young children is also a reason he can be up all night, but it’s also the nightmares. When he first came home I probably got punched in the face once a week, or got nailed with a flying elbow. He was having horrific dreams and acting them out in his sleep. I was never in any harm or actually hurt by his thrashing. His nightmares were intense, and still can be. Recently he has been keeping the both of us up with his swift kicking during nightmares. I don’t even want to image the horrors he is dreaming about.

He has come home from deployment, but he feels he never left Afghanistan. When I asked him to explain he said that it changed him, and the old him got lost over there.

Although he lives with PTSD and other health problems from deployment, he still wants to go back. I will never understand this statement. This seems to be common with a lot veterans. My husband explained he felt alive there. He went from being a warrior to just an everyday civilian when he came home. He misses that part of his life.

The guilt is unbearable. There are several reasons why he carries so much guilt with him every day. He feels guilty he came home. He feels guilty he couldn’t save another’s life. He feels guilty for things he may have done. No matter how much I repeat over and over that isn’t at fault, he still will hold tight to the guilt. This can send his emotions spiraling. Anger and sadness are the two most common emotions I see when the guilt takes over.

He has thought about suicide. He stressed to me he never intended to attempt suicide, but that thoughts of it have popped into his mind. To him, it is just easier to let go of life and be free from the clutch of PTSD. What stopped him? His answer to that was our children and me. He knew it would harm us if he took his own life.

There has been a silver lining to having PTSD.  He is enrolled in college. Something he thought he would never be able to do because of financial reasons, or he just thought he wouldn’t do well. He is a sophomore in college. He wants to be a social worker at the local veterans’ hospital. He never wants to leave another vet helpless or feeling lost. PTSD has made him more understanding to those going through the same symptoms.

He doesn’t talk about his PTSD because he’s afraid it would change other’s perception of him.

I can’t explain how much of huge step this is — that he’s letting me write about his struggles. It’s a great leap into the right direction for him. Being open about this illness is hard to do. PTSD is difficult to watch a loved one go through, but it’s twice as hard to be the one living with it every day.