The Day I Learned I Could No Longer Jump

Six months after being diagnosed with cerebellar degeneration, six months after a neurologist examined an MRI of my brain, leveled his eyes, cleared his throat and said to me, “you should be dead or in a hospital bed,” I’m staring at my physical therapist, Denise, and she’s daring me to jump.

I smile and look around the St. Lawrence Rehabilitation Center. There are three other patients in the activity center with me. Two women, both walking slow on a treadmill and Bill, a former Navy Captain, who is the proud owner of a new titanium hip. Bill is pedaling a stationary bike, and according St. Lawrence lore, Bill has never smiled. Ever.

I’m the youngest one in the activity center by at least 20 years. This is problematic because comparison naturally feeds fiction, and I survey the room and like the true gym class hero I still believe myself to be, I swell with pride knowing, believing I’m the most able-bodied in the room.

“Denise, need I remind you that I’m an athlete. A college soccer player. I’ve been jumping my whole life.”

Denise playfully rolls her eyes. This is only my third appointment at St. Lawrence, but Denise and I already share a chemistry. It’s December. Football season. I’m an Eagles fan. She’s a Giants fan. In between sets of squats and leg raises I tell her Eli Manning is overrated. She tells me the stereotypes regarding the jerkiness of Eagles fans is apparently true. She is a turtleneck conservative. No earrings, no rings just a silver cross pinned to her sweatshirt. But she is funny and real and in just our few hours together I stake her as the most compassionate person I have ever met.

During a set of lunges Denise tells me that Bill just lost his wife of 40 years to breast cancer. Her brown eyes swell, and then she tells me she lost her grandmother to the same disease. Denise and I both look at Bill. We watch him slowly pedal. She tells me it’s her goal to make him smile today.

To be honest, I’ve avoided writing this story for some time now. I guess by writing it, by pinning down its facts, I’m forced to further accept certain truths. I assume I did what most of us do when we don’t have the energy, courage, conviction to deal with truth. We tuck it away, like a debt, in the darkness of a desk drawer and do our best to forget about it.  But memories, with just the right stimulus, can resurrect without warning. They sit up, blink, open the drawer and leak into the light and remind you that memories, like debts, can be avoided for only so long before they must be attended to.

The stimulus today was a basketball bouncing off the concrete. My son, Chase, is in the backyard, dribbling the length of the patio and shooting on a little net he received for his 4th birthday. He’s 6 now, and he’s getting good. Dribbling, jump shots, layups. And he’s quickly learning about the earthly battle between the human body and gravity. Chase makes a jump shot and celebrates. As it often happens with sons, he feels me – his father’s eyes looming because he looks up, with his own blue eyes and finds me framed in the window.

I smile and wave and a trapdoor in my stomach swings open and my heart falls through and keeps falling because but I can’t play. Not now. Not today. Because some days my body aches too much. Because some days my brain does weird things. Like some days it convinces myself I’m trapped on the Tilt-a-Whirl or I’m buckled to the back of a big black bird or I’m a sneaker in the dryer or I’m frat party drunk. Because some days the fixed world spins, glides, tumbles and wobbles off its axis at speeds beyond what my eyes, my undamaged brain can comprehend. And I guess, some days, I just don’t play because… because I simply cannot risk the embarrassment.

For this story, I need you need to suspend reality. I need you to believe the unbelievable. But the unbelievable is the truth. Truth that the National Institute of Health, the epicenter of rare and novel diseases, couldn’t believe. Before my diagnosis, I believed I would do physically heroic dad things, like carrying all three children off to bed like footballs, each tucked under my arm, after they fall asleep on the couch. I believed I would be the MVP of father-son baseball games. I believed my children and I would run 5ks together, and I believed on a perfect summer morning, when the sky was veined with golden light we would ride bikes along the New Jersey coastline.

But we age and learn that real life always falls incredibly short of the one we imagined, of the one we planned.  And yet despite our protests, it’s the unplanned life that teaches more then our fantasies ever will.

“Jay are you ready?”

“Eagles are always ready to fly.”

“OK, but I’ll be right here, beside you just in case.”

Bill rides a stationary bike. He is straight-faced and staring at me.

“Hey Denise, can you go make Bill smile? He’s freaking me out.”

“Just concentrate on what your doing.”

“Denise, I got this. Need I remind you again, I’m an athlete.”

Cerebellar degeneration is exactly as it sounds. There is massive cell loss in the cerebellum, known as the little brain. The little brain controls motor skills: coordination, vision, and balance. After examinations from some of the top neurologist in the country, not one knows if I was born with a gaping hole in my cerebellum and had been able to compensate my whole life (remember, I’m an athlete) or if a civil war erupted in my little brain where cells attacked and killed each other. And as I write this, as Chase drills a jump shot, no one knows if the war is over.

In the last few months my coordination, vision, balance and motor skills have all deteriorated. Not at breakneck speed, but slowly, methodically. Little things, things I’ve taken for granted – handwriting, climbing stairs, and carrying a few bags of groceries — have become difficult. The doctors are surprise how well I look, speak and still function given the size of the hole in my brain. For a brief time doctors thought I had ALS. Then they thought Huntington’s disease. Then MS. Then, after six months of testing, they simply shrugged their collective shoulders and said they didn’t know. They told me, as if they were riding the Tilt-a-Whirl or the giant bird with me to, “just hold on.”

Denise levels her eyes at me.

I bend my knees, swing my arms back and forth and try to jump. I try and try and try and try, but I just can’t do it. I just can’t force my feet to leave the floor. My big brain screams at my little brain, “Jump!” But the message is not delivered as if some internal chord that transmits important messages had been severed. To Denise, Bill and the two ladies on the treadmill I must have looked ridiculous, like a wide-eyed field mouse fixed in a glue trap.

Denise returns, tells me she offered Bill her best joke about a priest, a rabbi and a monk playing Monopoly in Mexico and he didn’t crack. Didn’t even flinch

“Denise, I’ve had enough for today.”

When you think of your future self you envision your best self. Happy and unblemished. You’re the hero of your own movie. You convince yourself that you, unlike everyone else, won’t end up a tragedy. And in those great moments of fantasy you believe, with a swelled heart, in your own fiction.

I limp into the locker room, find a folding chair, stare into my lap and began to digest the fact that I have lost the ability to jump.  It occurred to me, right there in that empty locker room, on that folding chair that I would not be the man, the father I envisioned myself to be. A father running, jumping through life with his children. A
father playing basketball in the backyard with his son. A father who is fast and coordinated and who teaches his boy the aerodynamics of a layup as the evening sun vanishes from the suburban sky.

I open the locker room door to find Bill in the hallway, sitting in his wheelchair, as if waiting for me. I offer a little half-smile, and before I can turn Bill speaks, “Hey,” he still has those steely grey Navy captain eyes, eyes that don’t look at you, eyes that look through you. Bill clears his throat, shifts his weight on his God-given hip and says,

And then, in a very subtle, a very unprovoked way, he smiles. 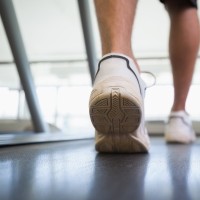