The Revelation I Had After Starting Medication for Anxiety

At the age of 38, I started to stutter. I was homeschooling my young son at the time, and every day saw us seeking out opportunities to socialize, venturing from the safety of our home to the outside world. One day, my words stopped coming. I could see them in my head, but they refused to travel the short distance from my brain to my tongue. And when that happened, I did something I swore I would never do: I decided to try medication.

Admitting you have a problem is one thing, but asking for help is another animal entirely. And medication? Even the thought of it made me feel like a failure — like maybe I just hadn’t put enough effort into the fight.

Then I remembered anxiety had been with me from the very beginning and had stuck around throughout the years. He was a mouthy, noxious devil hitching a ride on my weary shoulder. Years of therapy, meditation and deep breathing had done little to throw him off my scent and I was out of ideas.

I told my doctor everything and he agreed because nothing else had helped — it was time to take the next step. “Don’t think of medication as a crutch,” he said, “think of it as giving your brain the chance to breathe a little easier.”

After filling the prescription, I went home to my journal and wrote down how my body felt pre-pill. The list included depression symptoms like “irrational irritability,” “feeling tired all the time” and “no motivation,” along with anxiety symptoms like a hypersensitive fight-or-flight response, the occasional panic attack and anxiety-induced stuttering. The last of which liked to rear its head exclusively in social situation — the times I needed my words the most.

Reading over the list was a kick-in-the-teeth reminder of why I had made the difficult decision to try medication. But while the list helped ease my feelings of failure, swallowing that first small, salmon-colored pill still took every bit of willpower I could muster.

I did it anyway, shaking but determined and the next morning I woke up feeling … fine. OK, even. I was myself, only a little more settled, a little more at ease. Once I found the just-right level of medication, the volume knob of the anxiety slowly wound down, dimming the usual static into tolerable white noise. Through it all, I stayed just me.

This was the biggest revelation for me. I thought the medication would turn me into a dazed and disconnected version of the woman I used to be, but it didn’t. It just made it easier for me to talk to people. To get out into the world. To think things through in a logical way with less panic and less catastrophizing.

It shouldn’t work that way, should it? Anxiety is decidedly illogical. It doesn’t consider; it doesn’t examine. It is the moment, amplified — a million unnamable and irrational fears converging in the space of a skipping heartbeat and quickening breath.

But on medication, I became aware of the skewed logic of my anxiety. I was able to see through the lies the devil on my shoulder liked to spout off in an anxious moment — that everyone hated me, that I looked ridiculous, that I sounded incompetent –and focus on the big picture: what I was trying to accomplish and the best way to get there.

The medication doesn’t erase my anxiety; it still occasionally knocks me overboard. But I am able — finally! — to see through the storm and swim my way toward shore, where the words come easier and life, in all its beautiful chaos, awaits. 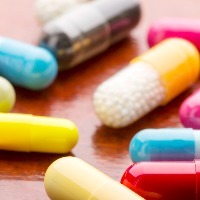