Why I'm No Longer Laughing at Memes About Moms and Wine

The internet is laden with parenting memes — offering instant comic relief for those of us in the often serious and always challenging trenches of parenthood. Memes are visual “sound bites” on themes in popular culture. Currently, memes of moms drinking copious amounts of wine are rampant on the internet. But what are these memes really expressing? Are they innocuous jokes or a glimpse at the perils of parenthood and addiction?

My husband recently started a 10-week course in London, leaving me to parent our three little kids on my own. Initially I turned to wine at night to alleviate the mounting pressure to perform as both mom and dad. Memes like this and this made me chuckle with relief that I wasn’t alone. But I also couldn’t ignore the niggling fear that my indulgence in wine might not actually be a laughing matter.

I quickly realized the enormity of my responsibility as a single parent. My 6-year-old daughter’s behavior instantly became impulsive and aggressive. My 4-year-old son withdrew and my 3-year-old daughter readily cried for daddy. The change in our family life felt like an abrupt storm — unsettling and destructive.

After nights of drinking one too many glasses of wine, I’d desperately gulp coffee in the morning to jolt me into the parenting mode. I wondered whether memes about imbibing were normalizing a serious issue worth acknowledging beyond the brevity of a giggle.

The Washington Post’s disturbing series “Unnatural Causes: Sick and dying in small-town America” explores rising death rates among white middle-aged women in America. It reports, “Drug and alcohol overdose rates for working-age white women have quadrupled. Suicides are up by as much as 50 percent.” Although addiction doesn’t discriminate, there’s a startling rise in addiction amongst this demographic — and many are mothers; women whose greatest achievement is motherhood and whose most daunting task is rearing their children.

Is it funny that the unparalleled job of motherhood is tainted by alcohol — and that the only escape from motherhood is in a bottle? The truth is that depending on alcohol for support through the toils of parenting is an unhealthy strategy that can have catastrophic consequences.

When occasional drinking turns to dependency the whole family suffers. Our children inherit not only our genes but also our behaviors. Almost one in five adult Americans (18 percent) lived with an alcoholic while growing up. Living with an alcoholic can be devastating for a child and can affect them into adulthood: Children of alcoholics are four times more likely than non-children of alcoholics to develop alcoholism.

For the children of alcoholics, their moms’ drinking is not a laughing matter.

The effects on children may not be obvious until adulthood if they too develop addictions; and the effect on mothers is even more deeply shrouded. Mothers often care for everyone around them, which creates the illusion they themselves are doing OK. But this smoke and mirrors act is tenuous. Popular Momastery blogger and recovering alcoholic Glennon Doyle Melton writes, “People who need help sometimes look a lot like people who don’t need help.” Mothers’ cries for help are being muffled by wine glasses and satirized in the form of memes. For many, drinking wine is the preferred method of self-care.

Memes about motherhood and wine embody the unhappiness many moms feel and make light of a grave situation. Normalizing wine as a justified coping strategy is perpetuating the problem.

As a temporarily single parent, I can only rely on myself to be there for my kids. If I’m not feeling 100 percent — everyone suffers. This spurred my decision to not drink during my husband’s absence. If my children get injured, I am the one to drive them to the hospital. If they can’t fall asleep at night, I’m the only one there to sing a lullaby and tuck them back into bed. I have to be unabashedly present. Perhaps my brush with sobriety will be the gateway to a more permanently conscious approach to parenting.

When it comes to managing the stress of parenthood — wine doesn’t work. What does work, however, is creating a sense of community and acquiring knowledge from books like “The Conscious Parent” by Dr. Shefali and “Rising Strong” by Brené Brown on parenting and self-discovery. With education, the right tools and supportive networks temperance efforts can start, or, for some, wine can return to its former role as the tasty, full-bodied accompaniment to a juicy steak, or the occasional tipple with friends. Wine as a tool to self-medicate can evaporate entirely.

They say laughter is the best medicine, but should that laughter come from the silly jokes our children tell or the absurdity of them spilling the milk — yet again; or from a meme making light of a mother’s reliance on alcohol? Now that’s a sobering thought. 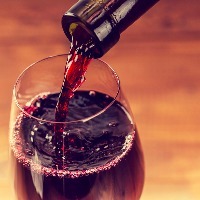