7 Words I Believe Reflect My Daughter's Journey With Anxiety

Every year, I ask my daughters to give me a small Christmas list. They’re both in their early 20s, and even though they’re easy to shop for, I like to get a couple specific ideas.

I opened my daughter Talee’s email and clicked on the first link. It led me to the bracelet pictured above.

I smiled. It warmed my heart. “She believed she could, so she did.” What a strong message. It says a lot to me that Talee picked this out for herself.

I’m sure she thinks it’s cute because of the slim design, the rose gold, and the “girl power” mantra. I do, too. But it also reminds me how far Talee has come.

Maybe I’m reading more into it than I should, but here’s what goes through my mind:

My little Talee, painfully shy with terrible separation anxiety in preschool. She used to hold onto my legs and say, “Mommy, I’m scared.” When I asked what she was afraid of, she’d shrug and tell me she didn’t know. I desperately wanted her to be confident and speak up for herself. As she got older, an amazing thing happened. She became sure of herself, walking tall and proud, talking to people with direct eye contact. She’s grown into a happy, confident, and outgoing young woman, graduating from college in six more months. She believed she could, so she did.

My little Talee, with sports-induced asthma so severe I thought she’d have to give up her passion — basketball. But I don’t think quitting her favorite sport ever entered her mind. She never, ever gave up. Through determination and hard work, she became one of the most valuable players on her high school basketball team. She still plays intramural tournaments in college. She believed she could, so she did.

My little Talee, dealing with anxiety and panic attacks when she was just 10 years old. She was frightened, embarrassed, and frustrated that she couldn’t make it go away. After having a panic episode one day in fourth grade, she was terrified it would happen again. Her fear caused her to miss several weeks of school. With medical help, she learned how to control her panic. It wasn’t easy and took time. She persevered and is stronger because of it. Panic no longer rules her. Talee is the one in control. She believed she could, so she did.

It’s funny how one small Christmas gift has so much significance for me. I know Talee would laugh if she knew that and tell me I overthink things way too much.

I’m sure her sister Mackenzie would also love one. With tenacity and courage, she’s carved a successful path for her career, one she’s dreamed of since high school. She believed she could, so she did.

When I wear mine, it’ll remind me to continue reaching for my hopes and dreams. And I’ll think of my strong, beautiful daughters. 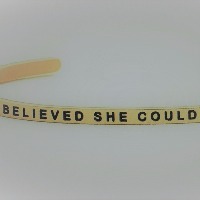