Well, we’re less than a week away from New Year’s Eve. For many, this means that it’s time to finalize those New Year’s resolutions. You know, things that we want to do or not do in 2017.

I don’t usually officially declare my resolutions, but I’ve made them, practical or otherwise. I’ve realized recently that resolutions are a different story entirely when you’re chronically ill.

Many people resolve to eat healthier, lose weight or exercise more in the new year. I personally have tried these as New Year’s resolutions, but it’s hard to stick to something when your health and your body’s reaction to food are totally out of your control.

Because a lot of my medical issues are gastrointestinal, my diet changes a lot. This means that my weight fluctuates, as does my stamina and ability to exercise.

While I would love to say that in 2017 I will commit to a regular fitness program and eat a certain way, right now all I can hope for is some exercise and a normal diet. Right now, as I’m recovering from surgery on my esophagus, I’m still eating small amounts and getting used to the foods that I used to not be able to eat.

Last year, I made the most ridiculous resolution of all: I said that 2016 would be my year without hospital stays or ER visits. Of course, I can’t control that at all, and I ended spending quite a bit of time in the hospital anyway. Sure enough, I had to go to the ER in the beginning of January, and last week I had another ER trip, with more visits, procedures and a major surgery in the middle.

So instead of being hospital-free this year, I started and ended the year in my least favorite place. But you know what? I’ve learned I really can’t control any of that. But one resolution I can make is to be OK with the things I can control.

I also want to resolve to focus more on self-care. It may seem unnecessary when you’re spending so much time worrying about and tending to your body due to illness. But I mean self-care beyond keeping up with medications and doctor’s visits. I mean taking time to nap, paint my nails, have tea, watch Netflix in bed and not feel guilty about any of it. 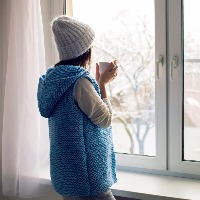