I was 27 when I lost my only sibling, my 10-year-old brother Mac, to pediatric cancer. Two types of leukemia to be exact, yet not necessarily the cancer itself, but rather the fierce wrath that stem cell transplants and chemo can bring along as a sidekick. Today, I am choosing to share a story of why I created Brave Gowns, which is now a new program at Starlight Children’s Foundation. Not the product itself necessarily, but why I knew one day I would create something to make a difference in the lives of hospitalized children.

There are so many wonderful moments I could share, but it seems more natural to start at the end of the story and then work my way back. It was November 26, 2002. Mac had just spent weeks in the PICU (pediatric intensive care unit) after his stem cell transplant. Even though the stem cells were the best match possible, they are still foreign cells, so the body does everything it can to fight them off. Picture third-degree burns inside the mouth, throat, lips and all over. Mac’s skin began to blister and peel off spot-by-spot, leg-by-leg, arm-by-arm. We were told night after night that Mac wasn’t going to make it. There were so many moments when I know we all stopped breathing, every single one of us in the room, including the nurses. How is it humanly possible to look at a child you love so much going through all this, without feeling as though you are, too?

Miraculously, however, Mac had gone from the PICU back to fourth floor pediatrics and was set to go home cancer-free! We packed up his room in the hospital so he and my mom could hop in the car the next day and drive to my house. I was five months pregnant and I had a 5-year-old at home more than two hours away, so I headed home thinking I’d see Mac the next day and I needed to get the house ready.

But the morning of November 27 ended up very differently. Mac had already been formally discharged, but still had to wrap up a round of dialysis. He was 10 and all boy, but that morning he asked my mom to lay in bed with him and hold his hand. She was exhausted from the past few weeks, so she crawled into bed next to him. They quietly held hands and peacefully fell asleep together. My mom awoke to the beeping of the machine showing Mac in full cardiac arrest: He was having an embolism, which cut off his oxygen supply.

I received the call and I jumped in my car and drove the hour and a half drive that I did countless times over the course of the year. When I walked into the hospital, nothing felt the same. The entire floor felt eerie. As I walked into his hospital room, I knew instantly life was about to change in a way I wasn’t prepared for. The boy who I so loved, my brother — full of life, laughter, defiance and practical jokes — was taking his last breaths. I rubbed his arm and let him know I was there. Then I asked his doctors how long this could go on. As hard as I knew it was going to be to lose him, watching him like that was even harder. They said he was comfortable, but they were pretty sure he was just waiting for me to say goodbye. Moments later, he went to heaven — exactly the time when we thought he’d be in the car listening to Shaggy and heading home for the holidays.

That very moment, the most painful moment of my life, everything became so clear. It was as though I had lived in a comfort zone for way too long and my soul was now free to take this one shot at life and to really make a difference. It took me a bit longer than I had expected, but I kept my word, and 12 years later I created Brave Gowns.

To further the impact, I’ve partnered with Starlight Children’s Foundation to launch Starlight Brave Gowns, high quality, comfortable and brightly colored gowns that replace unattractive, uncomfortable and sometimes embarrassing hospital garments to help kids feel like superstars. Starlight’s mission is to brighten the lives of seriously ill kids and their families, and through their “Give a Gown” campaign, you can donate just $25 to give a Starlight Brave Gown to a sick child at one of their partners at 700 children’s hospitals and other facilities across the U.S.

I’m honored and humbled to partner with such a great organization to bring Starlight Brave Gowns to thousands of kids who are living through experiences no child should ever endure.

Share
or  Copy Link
Link copied to clipboard.
Be first
622 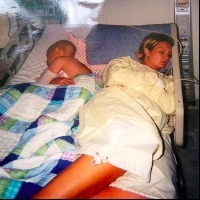