Why People With Chronic Illness Need Quality of Friends Over Quantity

I was diagnosed with dysautonomia and chronic pain in January of 2017. But my journey with chronic illness began long before I knew what to call it.

As if everyone’s freshman year of high school isn’t full of stress and anxiety, the first month of mine was met with overwhelming lightheadedness, debilitating nausea, blurred vision, and aching full-body pain. At 14 years old, I had absolutely no idea how to handle any of this. I was terrified and defeated, staring into the glaring eyes of uncertainty. My school was less than accommodating, as they struggled to work with me without a diagnosis. In the face of so many awful, infuriating realities, I turned to my friends for support. I wanted to know that whatever happened medically, I would have people standing behind me. What I found, however, was mixed reviews.

It very quickly became clear who was with me on this journey and who could not wait to escape. I was utterly shocked at the behavior of some of the people I once called my friends. Many of them failed to dismiss rumors about why I was missing so much school. Many of them let people spread terrible lies about me without stepping in. Some completely ignored me when I tried to reach out, when I was looking for someone to talk to. Some of them told me to suck it up and stop complaining because there are so many people out there who have it worse. Some thought I was only looking for attention. I could not wrap my head around how quickly people who I loved could leave me behind. This is what finally pushed me over the edge.

But it was the ones who were there who brought me back. Those who came to sit on the couch with me, bringing me flowers and snacks, letting me cry until there were no tears left. Those who genuinely felt my pain and were OK with me expressing it. Today, I credit much of my strength to them.

Things became easier as I started to improve, but it turns out things had to get much worse before they could get better. I faced an intense flare-up three years later, now the fall of my senior year. My symptoms came back worse than I’ve ever experienced. Most of my days were spent laying down in a dark room, crying tears of panic and frustration. My worries were now much bigger. Would I still be able to get into college? What would my future look like if this was how I felt during it? I missed five weeks of school, and during that time, I only heard from two people. Checking my phone when I woke up to see no messages would shatter my heart each morning. I was utterly overwhelmed by isolation, craving my lost social life. Everything felt the same as it had three years before, just with the intensity turned way up. Instead of the people I considered my friends not standing up for me, they were now the ones who broke me. They called me a burden. They blamed me for forcing them to make sacrifices because I couldn’t do things most teenagers can. They called me selfish and told me I had never been a good friend since I got sick. They told me no one would ever fall in love with me or want to put up with me because of the things I dealt with every day. Above all, they defined me by my illness. And that was where I had to draw the line.

When I was able to separate myself from the toxicity, I realized that all I should be concerned with is the amazing people in my life who do care about me. I was never looking for anyone to understand what I’m going through, mostly because I would never wish this on my worst enemy. What I did want, and still do, is people who are willing to look past my illness. There is so much more to me than a few words that classify a property of my nerves or my blood pressure. I am creative, I am strong, I am resilient. And I don’t need people who can only recognize a single dimension of my identity.

This is why quality over quantity is so important. No one deserves to be labeled. No one deserves to be doubted. But those who are, like myself and so many others who live with chronic illness, will prove those people wrong. The way I see it, there is so much negative energy flowing around my body as it fights so hard to create a new equilibrium for itself, to learn how to thrive in its challenging reality. No one in this position needs any more negativity from the outside.

So here is my message to girls, teenagers, and everyone who does not want to be labeled or defined by cold medical terminology: go the extra mile and find the people in your life who are brave and genuine enough to love you for who you really are. We deserve it, and they are out there. I have learned that it is possible to find happiness when you separate life’s challenges from its gifts. It isn’t easy, but neither are the struggles that people who fight chronic illness face everyday. So find those people who want to support you, because chances are, they’re looking for you, too. 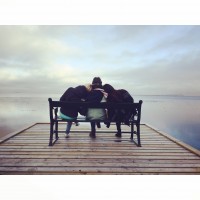