Although Disney’s “Moana” was the feature presentation, it was the short film prior to it that left me speechless, in a good way. The animated short, “Inner Workings” is the story of a single man who lives a very ordinary life as an everyday office worker. What the audience sees is how his “inner” emotions work through the eyes of his brain, heart, stomach and other organs.

While his heart and the rest of his organs long for adventure, fun, the occasional heavy meal and a girlfriend, it’s his anxiety-ridden brain that leads him to not do anything out of the ordinary for he fears it will kill him. Yes, each scene ends with him envisioning his funeral because of harmless actions like stepping in ankle deep water or eating a meal with bacon.

If you’ve lived with anxiety or obsessive-compulsive disorder (OCD) like I do, you know exactly what this feels like. The urge to want to do fun stuff but the inability to do so out of the mind-controlling fear that comes along with it. Watching the film triggered many memories of my life when each day would be exactly as the previous one out of fear of doing things out of order and ending up with some sort of horrible repercussion for doing so. I spent months fearing even the slightest change or “adventure” would somehow dangerously backfire. Even ordinary things like going down a waterslide or being on a swing would trigger my anxiety.

While the film ends with him realizing his life would be like this forever and he would die an unhappy and lonely old man if he didn’t try to change something, for most of us, it isn’t that easy. In fact, this kind of immediate change is next to impossible for almost anyone. Yet, the story still resonates on multiple levels because it was like seeing into our own minds. I for one, wished for such a long time I could just be fearless and do mundane tasks without overanalyzing the outcomes. I saw so much of my former anxiety-ridden, OCD-filled life in this character. While my transition to an anxiety-free life was nowhere near instantaneous like his, the time spent working on it was well worth it. 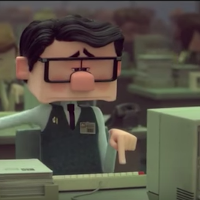