Why I Started Being Vocal About My Anorexia

“Look at how skinny she is,” I heard a woman say in Starbucks, referring to a young lady in line. “She has to be anorexic.”

Her friend turned toward her, her face displaying confusion and pity. “I just don’t get why they don’t just eat,” she said. They both looked at each other, shrugged, and continued onto another conversation.

This is one of many conversations and comments I have heard regarding the eating disorder that is anorexia nervosa. More often than not, people are confused as to why someone would deny themselves the pleasure of eating food or how they could possibly enjoy starving. I wanted so desperately to jump into their conversation and explain to them just how complex this eating disorder is. I wanted to explain to them that anorexia is filled with “rules” that do not make sense to someone that is not struggling, but to someone with anorexia, it is logical. I wanted to explain to them that anorexia has a loud internal voice that can consume someone’s rational self. I wanted them to leave Starbucks knowing more about anorexia than when they entered.

But I bit my tongue, got my grande black coffee and went about my day.

Eating disorders, and in my experience, specifically anorexia nervosa, are often misunderstood. The amount of hurtful comments or incorrect information I have heard about the topic is enough to write several books. Oftentimes, I would get fed up and burst. I would rant about how hurtful someone’s comments about the illness were or I would inform them that to “just eat” isn’t as easy as it sounds. For me, this outburst of information was immediately followed by regret. There was always someone that would ask: “What makes you think you know so much?” I would dance around the subject of my struggles with the illness like a world-class ballerina and eventually, the subject would be dropped.

Before I went into treatment, I took a vow of silence when it came to being vocal about my struggles. I always told myself that my comments weren’t needed and that people did not care about how I was actually doing. So, I bit my tongue and silently battled with my eating disorder. The truth is, I did not want to be known as “that anorexic girl,” and didn’t want my eating disorder to be the topic of conversation when I left the room. I didn’t want to be pitied, I didn’t want any attention brought to me. I preferred to be invisible.

I struggled with anorexia for three years prior to being medically diagnosed in November 2014. A year later, I entered treatment the day after Christmas. Through the month and a half of treatment, I slowly began to realize that I am not meant to be invisible. My voice matters and my own struggles with this disease could help someone else. I left treatment with the motivation to inspire others. I pushed my feelings of wanting to be invisible aside and answered honestly when people asked where I went for a month and a half. No more dancing around the subject — I was putting a voice to my struggles.

Another hospitalization later, I am still continuing to remind myself that being visible is OK. I do not pretend that I am always doing OK in this recovery process, because some days I am not. Recovery is an option that I have to choose every morning, every hour, every meal. And sometimes, recovery looks like a daunting mountain that I am too tired to climb, so I do not choose it. But, I know that I can always start again tomorrow. Being vocal about my struggles is not always easy. It can get uncomfortable and awkward, but I also know that hiding in the shadows can only get you so far. If I can show someone that recovery is within reach or inform someone about how multilayered anorexia is, then all the uncomfortable feelings were worth it. 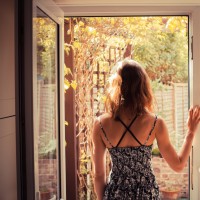