How I Learned Asking for Help Makes You Strong, Not Weak

“I think you should see a counselor.”

These are the seven words I never thought I would hear in my lifetime. “Counselor?” I thought. “Only ‘crazy’ people go see counselors and I am not crazy.”

Barely able to function, and after many thousands of dollars I didn’t have spent on medical exams telling me that I am “just fine” and “very healthy,” I begrudgingly made my way to a counseling office where I ended up terminating after a few weeks. I thought it was a total waste of time to sit in a stranger’s office and talk. I needed to get better as soon as possible. I had goals I needed to meet. Pronto.

After termination, however, I just kept getting worse and worse — fatigue, headaches, nausea, memory loss, muscle weakness.  Not wanting to do anything or see anyone. Feeling so heavy I could barely get out of bed. Not being able to walk a few blocks with my mom before feeling like I wanted to collapse. I wish I was exaggerating, but this is the point to which I still refused to seek help. I would say it was over a year before I recovered from that depressive episode. If I had gotten the mental health assistance I needed sooner, I most likely would have gotten better much quicker and I would have felt so much less alone than I did.

Looking back, I think a lot of it had to do with not wanting to feel “weak.” I’ve never been one to like asking for help. Asking for help has always made me feel like I’m incapable. To share my weaknesses with a complete stranger too? Counseling sounded terrifying to me at the time. I’ve learned now that asking for help when you need it is actually a sign of strength. It can be scary to ask for help, but I’m learning to do it more, and wishing I did more of it in my past. Especially during that darker season of my life.

If you’re struggling with anxiety and depression, seek help! It can feel scary and unknown if it’s your first time going to counseling, and your reasons for not going might be different than mine, but I can tell you from my new experiences in counseling that it’s been a game-changer for me in healing, growing and changing closer to the person who I feel I was meant to be.

Recognizing you’re going through something hard and needing some extra support is brave. It’s strength and you’re worth fighting for. You don’t have to do it alone like I tried to do. We weren’t meant to do it alone.

Seek the help you need and live the life you were created to live, or should I say, thrive. 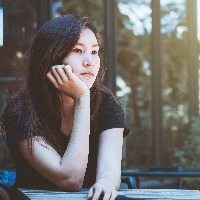