As chronically ill people, we go through a lot on a daily basis and depending upon how old we are and when we were first symptomatic, we could have been experiencing this poppycock for decades now. This constant crapshoot day to day can affect our personalities. That being said, most of us have an awesome sense of humor! Except for the fact that it’s just a bit off center. (OK, mine is way off center!)

With this in mind, I introduce you to:

We start off old school with a game based on the childhood favorite “Go Fish.” For this game, you need to call your fellow sickies with matching diagnoses because medication similarities are a must. You will also need the deck entitled “The 13 Most Commonly Prescribed Meds For Autoimmune Diseases 2017” plus the “2017 Chronic Pain” expansion pack. (The “Herbals and Supplements 2016” expansion pack is OK as well if mutually agreed upon. The 2017 edition will be released in early summer.) Edit the decks to reflect each player’s current med list (or wish list) and shuffle. Proceed as you would for classic “Go Fish” but at the end of each round, everyone wins whatever medications are depicted in the matches they make. *Reduce the stress of going to the doctor and reduce co-pay costs while having fun!

Another favorite that’s been around forever, Bingo can be fast-paced and a lot of fun. And considering the unusually high number of warnings and side effects that go with autoimmune medications, there should be enough combinations to create quite a few Bingo cards for hours of play. I suggest collecting a small donation from everyone at the door to hand out to the winners (to offset the cost of the medications causing all the side effects mentioned on the cards). *Absolutely no choosing cards based on preferences of side effects. You get what you get – just like in real life, ladies!

Played like the old tile-based game “Memory” where little kids flip a tile and then flip a second tile to try to find matching photos, this is a modernized video game that exercises poor memory and identification skills by having players match “tiles,” on which one has a brand name and the other has a generic name for the same medication printed on them. It can be played as a two-player competition game or as a one-player timed game against yourself. Bonus rounds feature “Spell That Generic!” and “Name That Med By Photo.”

An offshoot of the immensely popular Texas Hold’em poker game, “Betting For Body Parts” utilizes standard chips that feature the joints, muscles and organs most commonly affected by autoimmune disease and chronic pain. Game play is strictly poker based: a pair of aces beats a pair of twos, a straight beats a flush, four of a kind beats anything… The key is in the way you place bets. Players bet by “asking” for something they need as featured on a chip. (I need a T10 vertebra. I fractured mine and it’s just not going to be the same again.) A player calls a bet with a need (chip) of their own. Winners get the part they need. (Doctors are standing by.) *These events usually have very limited seating. Book your tickets in advance!

I encourage all of you in the chronic illness world to check out these awesome new games – made with us in mind –  when planning your next social event! 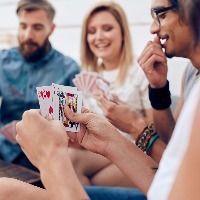