What the Rare Disease Community Means to Me

My husband and I found out we were expecting our first child in March of 2012. We were surprised and shocked and so excited. During those nine months of waiting for our son to be born, we also squeezed in a wedding and a brief honeymoon. It was such an exciting time in our lives and a complete whirlwind. The thought that anything could be wrong with my unborn child never even crossed my mind.

We planned on breastfeeding, only having natural baby products, definitely no co-sleeping, and a minimal amount of wooden toys. Oh man, were we naive. So, so naive!

Silas was born on a sunny day in November. It was a fast and uncomplicated birth that had topped off my totally normal and healthy pregnancy. We had so many warm and cuddly snuggles with our sweet baby boy. Things were perfect! I think at this point many of you might know what’s coming next, the feeling that creeps in as you start to notice or hear things that make you feel a little unsettled. The not-super-obvious red flags that lead you down the road to endless doctors’ appointments, therapies and many tears.

Silas had trouble regulating his body temperature in the hospital and had failed his newborn hearing test three times. We stayed in the hospital for one extra day, until they felt comfortable with his body temperature. He refused to breastfeed, and I felt like a failure as a mom. I had every friend around telling me about lactation consultants and squeezing boobs like hamburgers and “You have to try these cookies, they will solve all of your problems.” Alas, he never got it down and we went to formula. We had sleepless nights, missed milestones, extra amounts of spit-up, and lots of co-sleeping (it’s amazing what you’ll do to get an hour of sleep).

It took hundreds of appointments and three years for us to get a diagnosis. We heard from every specialist that they had no idea what wrong, but they suspected something rare. Towards the end, our geneticist ordered a whole-exome sequence. She gave us a results wait time of four months and a 25 percent chance of getting a diagnosis (in other words, don’t hold your breath). If nothing came of it, she was throwing in the towel and referring us to the NIH. Four months later, we received a magical phone call — he had a diagnosis! We went in for our appointment and she explained that he has ADNP syndrome, and that there were only 13 other people in the world with this diagnosis and exactly three publications. The only thing we learned from that appointment was a name of a diagnosis and nothing new. No prognosis, no “what to expect,” nothing. We were still, essentially, alone. We then found a Facebook group for parents with children with ADNP syndrome, and my life was changed!

It turns out that Silas was actually the 33rd patient diagnosed. We scoured every post and picture. These kids looked just like Silas and had almost all of the same characteristics. My husband and I were up for hours reading; we felt so much instant camaraderie. We knew right away that we had found a new family, our tribe.

Over the last one and half years, since receiving the diagnosis, we have become actively involved in the rare disease community. We now have 105 patients worldwide in our ADNP community. We have started a foundation for research (ADNP Kids Research Foundation). Many of us have attended rare disease conferences. In September of 2016, five other ADNP mothers and I went to the Global Genes Summit in California. It’s a three-day conference for rare disease patients and patient advocates. We walked in this conference not knowing what to expect and found a home. We were surrounded with hundreds of people who knew exactly what we were going through. I was so amazed and how open people were, how willing and eager to share all they knew with us.

We knew we wanted to start a foundation for research. With such a small patient populations and minimal research out there currently, it’s hard to get funding. We reached out to established foundation members and the staff at Global Genes, the Everylife Foundation, and Rare Disease Legislative Advocates (RDLA). Everyone was so happy to share what they knew with us to make our journey easier. The common phrase we hear around the community is “Why reinvent the wheel if you don’t have to.” We are so thankful we didn’t have to reinvent anything. We have been able to lean on and get support from so many other rare disease advocates.

This community has been like nothing I’ve ever known. It has transformed the way I interact with people in my life. It has inspired me to fight and advocate for not only my child, but all rare disease patients. I have been given a voice and intend to do everything I can to shine a light on rare diseases. I feel honored every day to serve this cause alongside so many selfless and passionate people.

Share
or  Copy Link
Link copied to clipboard.
Be first
383 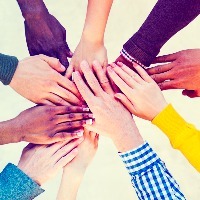