When People Get Competitive About Which Health Crises Are 'Worse'

Every couple of years, people around the world are invigorated by watching the Olympics. Even if we don’t watch the actual games, we’re bombarded with news articles and social media posts praising all the record breakers and medal winners. We admire the athletes’ competitive spirit, and root for our favorites (or our country) to win, win, win.

That drive to be the best, the fastest, the most, the everythingest carries over into other aspects of life, and that’s not always a good thing. It’s not just about being the best we can be, it’s about being better than someone else (or everyone else) – surpassing the Joneses, so to speak. While some simply take this inspiration and strive to do better, far too many minimize other people’s accomplishments in order to make themselves feel superior. When taken too far, this can give the impression that whatever we do in life, if we’re not The Best, it’s not good enough. That we’re not good enough. And it completely negates the value of our effort, dedication, and accomplishment.

Oddly enough, there seems to be a similar competitiveness when it comes to bad things, as well. Far too often when we are dealing with a difficult or challenging situation, instead of simply offering sympathy, people feel the need to state that their own crises are worse (whether that’s actually true or not).

“Oh, you sprained your ankle? I broke my toe last year – now that was painful.”

“Oh, you lost your job? I didn’t get that promotion I was hoping for – it’s so unfair.”

“Oh, you’re getting divorced? I still haven’t met anyone on Match.com.”

By suggesting that their suffering is worse than our suffering, what they are really doing is shutting down the conversation, preventing us from complaining, venting, or just talking about our problems.

Sometimes these conversation stoppers come even without specifying another person who “has it worse.” I really want to believe that they come from a misguided attempt to make us feel better (what I often refer to as “they mean well, but…”), but these statements – said more times than I can count – tend to minimize our suffering, to invalidate our feelings.

“At least it’s not cancer.” This is probably the one I’ve heard most often (especially since I used to work and volunteer for a cancer-fighting organization). It may be true, but that doesn’t mean that our illnesses aren’t bad, too. There is no cure for many chronic illnesses, no surgery to remove the bad parts. Dozens of medications every day can only attempt to reduce the symptoms… and often, they’re not very successful at that. Millions of people with chronic illnesses will never be free of them… so this really doesn’t offer much comfort.

“At least it’s not terminal.” Just like above, this is an attempt to say, “See, it could be worse” – in the “bad illness” competition, we did not “win.” But there are two major problems with this response. First, our illnesses may not kill us, but they will leave us living with excruciating pain and debilitating fatigue for the next 40 years or so. Is that a life you would ever wish for yourself or someone you love? It’s not necessarily a consolation. Second, though I try not to think about it too often, the reality is that many of these illnesses could kill us. Sarcoidosis is already in my lungs, and can affect the liver, heart, or brain. The Bernie Mac Foundation was started after he died from it. Many autoimmune and inflammatory, diseases can affect any organ or system, including the ones we need to survive.

“At least you look good/But you don’t look sick.” I know it sounds like a compliment… but really, these statements can belittle the experience of people suffering with invisible illnesses. They imply that we can’t really be that sick, because it doesn’t show (though the extra prednisone pounds, the rashes, the swelling, and the bags under our eyes would disagree), or that the suffering doesn’t matter because what’s more important is our outward appearance.

Now I’ve always been a glass half full kind of girl, always looking for the silver lining in any cloudy situation… but there’s a big difference between us choosing to focus on that, and someone else telling us to. When patients like me choose to focus on the things we still can do rather than the ones we can’t, it’s a coping technique. We can’t allow ourselves to be miserable all the time, even if we are sick and tired and hurting all the time. But when we do focus on the pain – either because it’s an especially bad flare day or to explain what we’re going through – it’s because we need to. Even if what we’re going through is not The Worst, it’s still bad, and we are entitled to feel upset about it. But when our friends, family, and coworkers make statements like these, they suggest that we don’t have that right, or that they just don’t want to hear about it.

What’s especially sad is that this type of thinking seeps into our subconscious, and leads us to feelings that we know we shouldn’t have. We start to question our own right to feel bad about our situation. How can we complain? After all, other people have it worse.

At least I haven’t had any joint replacement surgeries (yet).

At least I haven’t had to be hospitalized from this (yet).

At least I’m able to walk (most of the time, with a cane or a rollator, for relatively short distances).

A friend was in a car accident, so how dare I complain about needing a walker when she had to use a wheelchair?

Another friend was in the hospital with heart complications, so how dare I feel miserable about the pain in my arms, legs, and back?

How could I miss XYZ event just because I’m in pain? There are stories on TV all the time about people who do so much more after overcoming so much worse!

The thing is… we know that kind of thinking is not fair. We would never stand for someone we care about thinking that way about herself, and would be infuriated if someone else dared to say these things to us. But it’s so easy to feel worse and worse about ourselves, and then blame ourselves for feeling that way. We look at other people, and think about what we “should” be doing, how we “should” be feeling, based on what they do.

But here’s the thing: it’s not a competition.

We all experience pain and sickness differently, and we all have different ways of coping with it. Sadly, there is no finite amount of suffering possible in the world at any time, so one person’s misery does not lessen any other’s. (Fortunately, there’s no finite amount of joy either, so one person’s happiness does not diminish anyone else’s either.) If we haven’t eaten all day and we’re hungry, that doesn’t go away just because there are people starving around the world. If we lose a loved one, it doesn’t hurt less because it wasn’t part of a mass shooting. And if we are feeling the pangs of the reality of our illness, it doesn’t feel better because there are other health concerns in the world.

It’s time to stop looking to others to determine how we should feel. Sick or well, happy or sad, grateful or full of self-pity… we need to learn to trust ourselves. Our feelings – whatever they may be – are valid, and not based on anyone’s experience but our own. We can feel sad for someone who is suffering while still recognizing that our own situation is less than optimal. How we feel about – and cope with – our own circumstances may be different from day to day, and that’s OK too.

It’s not a competition. There’s no prize for the person who suffers the most, and no reason to compare what we’re feeling to anyone else. Most of all, there is no need for any judging – not from anyone else, and most of all, not from ourselves.

This blog was originally published on Float Like a Butterfly. 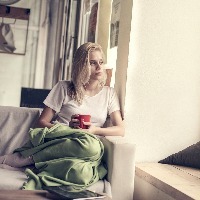