Talking about mental health in sports is hard. Not only is it hard because it seems to contradict our strong and invincible personalities as college athletes, but because mental illness is widely misunderstood. Being a college athlete, I have realized I am automatically held to a higher standard by everyone I meet. I am not supposed to struggle and I am expected to excel in all aspects of my life. Athletes are used to playing through pain we experience, hiding injuries from the coach so we don’t get taken out of a game, and always minimizing the pain we experience. It is a part of being an athlete — that we can overcome obstacles we face — but what happens when we cannot see that obstacle? When that obstacle is inside our head and seemingly never goes away? What happens when cannot compartmentalize our thoughts that are causing us inexplicable pain?

As a DII softball player of three years, opening up about my struggles with major depressive disorder (MDD) and anxiety has made me feel so weak, confused and helpless. But in return, the experience has built me up to greater heights where I can now see that silver lining I wouldn’t have believed even existed only a short while ago. Effortlessly I could sit here and write about all the distinctive challenges of being a college athlete experiencing mental illness and make it sound really eloquent with big words, creative analogies and personal testimonies as to why it’s so awful, but that would serve no purpose for anyone hoping to gain more understanding or take away anything from reading this. And the truth is that even if I explained it in the best way I possibly could, you cannot understand how I feel no matter how empathetic you are, because “a feeling” is something deep inside of us, something we cannot show with words or actions.

Perhaps the most frustrating thing about experiencing mental illness as a college athlete is how physical injuries and illnesses are treated in contrast to how our mental health is treated. I sprained my ankle in the off-season during my junior year, which really wasn’t that awful, but it received a lot more attention and care from others than my mental health ever has. In my lowest moments with mental illness, lifting with my team even became very difficult for me and I was able to do physically less than normal. The mind and body are deeply related, but in the world of athletics there if this belief we have the ability to separate the two. The idea that as athletes we are “mentally tough” and that when it comes to our personal lives we should “leave it off the field” is an incredibly frustrating message received by college athletes.

If struggling with mental illness while having the opportunity to play my favorite sport in college has taught me one thing, it would be appreciation — not only for the game but for my team, for my family and for my life. Many days I truly didn’t believe I was going to make it to the next. Over time, my zest for life and for the game faded and while it may not have been as strong as it was before, I still got to experience the feeling of getting a hit in a big situation and making a diving play in the field. These are those indescribable feelings of invincibility, of feeling we are on top of the world which almost any athlete can relate to — the feelings that made us fall in love with the sport in the first place. Those little moments taught me to appreciate every moment not just in softball, but in life. To embrace the good plays and the bad, the noisy bus rides after a good game and the silent bus rides home, to truly be mindful in each moment, which carried over into my ability to appreciate life.

My mental illness has caused me to see how low one could feel, how one could begin to have the feelings their life is worth nothing, but my sport along with my illness have shown me that each moment of our life — no matter how good or bad we are feeling — is an important moment. If it weren’t for those lowest moments, how could I appreciate the better moments; just as if I had never had a day where I made three errors in a row, how would I have come to know the feeling of joy even when just fielding a simple ground ball? Had you told me this a few years ago, or even a few months ago, I would not have believed you because that’s what mental illness can do. It can alter your sense of reality, not allowing you to feel those bouts of joy during times meant to be exciting. But in some way beyond my comprehension, softball humbled my mind into being able to appreciate each moment.

As any athlete knows, there are very few feelings as good as knowing there are people who have your back no matter what: your teammates. In my journey with mental illness and during difficult events in my life, I was lucky enough to have a team to lean on when I needed it. Having teammates means that, no matter what, there are people who have your back. With mental illness that idea could quite literally save your life — and I know because it saved mine. Many days and nights, and truthfully for days on end at times, my thoughts revolved around nothing beyond the idea the world would be better off without me. Like many people struggling with mental illness, I felt as though I didn’t belong here; I just didn’t have a place. However, being on a team means being a part of something much bigger than yourself. It is a place where every single member of the team belongs and is needed whether you start every game or have never touched the field. When everyone is playing their part, a team runs like a well-oiled machine, but when a piece is missing or not working correctly the machine can malfunction. Knowing there was a chance my team could malfunction even a little bit if I were gone was enough to keep me going. While I wish I could have found more reasons than one to keep me going, all that matters is I kept going and I never had to do it alone. 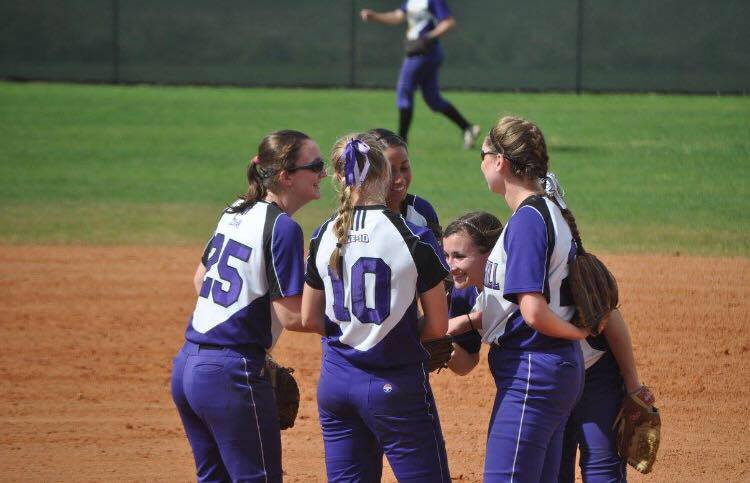 While my appreciation for the game and for life has increased tremendously because I had a place where I truly belonged and was needed, perhaps the greatest blessing which resulted from being a college athlete with mental illness is the relationships I had with teammates and coaches. The people around me were not only teammates and coaches, but my best friends, teachers and family all built into one. They saw me at my best, at my worst and everything in between. As many college athletes do, I lived with some teammates which meant spending a lot of time together, if not every single moment together. There were many things we did that one would expect of college athletes, such as talk about practice that day for hours even after it was over, prepare for the biggest rivalry game, and celebrate a big win. But there were also many struggles behind closed doors. Struggles with mental illness often happen in hidden places.

Many times, the struggles were in a dorm room where I sat in tears with a teammate(s) by my side, making sure I knew that no matter what they would always be there for me. Sometimes these closed doors were those of a teammate and myself in her car, driving around until I felt good enough to go back and be with the rest of the team. A few times it was behind the closed doors of my coach’s office talking to him about topics much deeper and much more important than what I could do on the field. At my worst, these closed doors were those of a hospital, where my teammates were there waiting with me until I was transferred a psychiatric facility for a few days. Knowing the people I get to spend my greatest moments with on and off the field would stick by for the lowest moments, even when it meant them giving up on something in their own life, has made all the difference. In fact, knowing this in the moments where I was truly standing on the cliff between life and death, it has saved my life.

A college team is so much more than it may seem. It’s true you only spend four years together, and in fact less than that with some people depending on graduating class years, but it is a truly special and indescribable bond between everyone involved that is comparable to the bond between families.

Unfortunately, my mental illness caused me to leave softball, my team and coaches, and the school I loved during my senior year to take care of my mental health. Through my recent recovery journey, I have met many people sharing similar experiences as college athletes. I now know I am not the only player from my conference, from my sport or from my very own team dealing with serious mental health issues. During this journey, I have heard all too often stories such as Madison Holleran’s and Jordan Hankins’, both collegiate athletes who lost their lives by suicide. This is why we have to talk about mental illness. Although it shouldn’t, talking about it can make you feel weak, vulnerable and as though you are less because of your illness, but it could save a life and that life could be your very own. While I wouldn’t wish my experiences on anyone, I have learned a lot, and it has been a blessing in opening my eyes to things much bigger than my sport. Being here and able to write this, I hope even just one person can see they are not alone or learn how to be a better teammate.

Share
or  Copy Link
Link copied to clipboard.
Be first
163