Cataracts and Glaucoma – They're Not Just for the Elderly

When people think of cataracts and glaucoma, they generally think of elderly people. It’s true that age does greatly increase your chances of developing these and other eye conditions. Yet, that creates a misconception that leads to others. Even advertisements about cataracts and glaucoma medications are geared towards elderly people. What most people don’t realize is – young people get these conditions too!

In 1991, I was only 4 years old and would scream every time I went into the sunlight. My mother, who was only 24 and a single mother, was told by doctors at the Pediatric Eye Department of the University of Iowa Hospital that the cause was congenital cataracts that were magnifying the light onto my retinas and causing immense pain. Doctors informed her that the cataracts had been developing from the time I was 2 and were hereditary from my father – who also had cataracts as a young child. At the time, cataract surgery was still experimental on children as it was usually caught in infancy or later on in life. So the lead doctor of the Pediatric Eye Department made my mother swear that she would take me to no other eye doctors for eye checkups before he would agree to do this surgery on me.

Unlike now, the only option available at the time was to remove the lens, the sac it sat in, and the tissues that hold the lens in place and either contract or stretch the lens as the eye focuses. Everything in that chamber was removed in each eye and left empty. This means that there is no way to put an artificial lens in, even as an adult. Times have changed a lot since then as medical technology has made it possible for children to receive a new lens, but no options exist for me and I’ve lived with very thick glasses and contacts ever since. 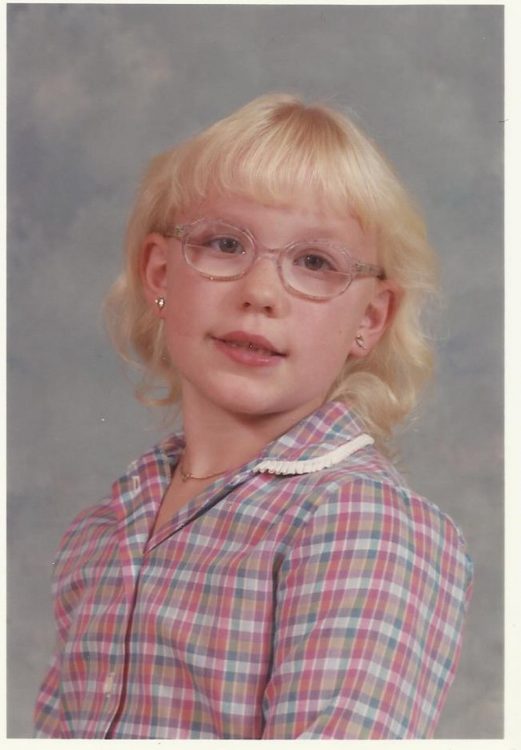 For anyone who wears contact lenses, you know how uncomfortable they can be. When I was 5 years old, I spent hours at the U of I Contact Lens Department learning how to put them in, take them out, and take care of them. A huge responsibility for a child so small. Yet I couldn’t wear them every day due to discomfort and my astigmatism- which is vertical rather than the usual horizontal. As you can imagine, having such thick glasses that greatly magnify your eyes led to a lot of bullying.

There was the usual “four eyes,” “freak,” “nerd,” and other worse comments. Then there was the fact that my complications resulted in me sitting in the front row and being placed in special education and one-on-one tutoring. I also had to wear a visor in class to protect my eyes from the bright fluorescent lights. Plus, my mother and I moved frequently either due to a new lover or a new job in her life, which made making and keeping friends very difficult. Luckily, I did have one friend at a few of the schools that protected me. To them I will always be grateful, for seeing the real me and for keeping the bullying from getting too physical.

Yet I still grew up with low self-esteem due to feeling ugly with my thick glasses. Despite a few people in my life now who prefer me with glasses, it’s still something that I struggle with constantly. At age 10 I also developed open-angle glaucoma and learned how to take drops every night to lower my eye pressure. If people do actually know what glaucoma is, they at first don’t believe that someone so young could have it, just like with rheumatoid arthritis (RA) and fibromyalgia.

Then there’s the people that make assumptions about my mental capabilities because of my thick glasses. Yes, even as an adult this is a huge problem – especially when my RA and fibro pain and fatigue become so bad that I need to use my walker or wheelchair. People often talk slower around me or repeat things they say multiple times as though my blindness prevents me from comprehension (despite the fact that I earned a master’s degree with a 3.92 GPA). Think of how people typically talk to young children and you’ll get the idea. I especially noticed this around a few doctors. Either they talked down to me or would speak to my wife instead about my treatments as though I’m not right there next to her.

So one day I did an experiment with my rheumatologist. I didn’t have contacts at this time due to insurance and my inability to afford them out of pocket. So I took off my glasses before my rheumatologist entered the room. I was mostly blind, but able to see vague shapes and thus able to pretend that I was able to see. Sure enough, her whole demeanor changed and she spoke to me as she would toward any adult. I don’t think she even noticed.

Another example is when my wife and I shopped for Halloween costumes at one of those shops that’s only open during October. Again, I didn’t have contact lenses yet and my wife was pushing me in my wheelchair when a saleswoman approached us. Rather than addressing me directly, she said to my wife something along the lines of, “Are you interested in finding a costume for [them]?” as though I was nothing more than a pet. She jumped a good few inches and her mouth opened in shock when I spoke up and said, “Actually yes, I am looking for a costume.” The saleswoman didn’t even apologize for her assumptions. We ended up not buying anything there and have refused to go back. This kind of treatment is a regular occurrence in my life if they see me with my glasses and some people will outright stare.

Now I have a 6 year old son that is developing cataracts. Yet, when he eventually does need surgery he won’t have to go through the things that I have. Technology has advanced so much that they’ll be able to replace his lenses with new ones and he won’t have to endure having thick glasses like I have or the ridicule that comes with them. If for some reason that option doesn’t work and he does need thick glasses, I want him to know that thick glasses do not define his worth. I also long for the day when cataracts, glaucoma, and arthritic conditions are no longer viewed as things that only elderly people experience.